“In the sixth month of Elizabeth’s pregnancy, God sent the angel Gabriel to Nazareth, a town in Galilee.”

Angels are a lively presence in the New Testament. Jesus himself referred to them on many occasions, and the evangelist Luke reports that Jesus’s birth was foretold by an angel with a specific name, Gabriel. Named angels and archangels feature prominently in later Christian tradition, especially in apocalyptic contexts. The veneration or worship of angelic figures was a recurrent concern of early Christian writers against heresy. Angels were a mainstay in Judaism and Islam, and Gabriel reportedly announced God’s message to Muhammad.

So accustomed are we to those angelic characters that it is easy to forget at what a late stage they appear in the Jewish story. Angels certainly feature in the Old Testament, as divine envoys and as mighty figures in the divine court – see for instance the overwhelming Cherubim in Ezekiel 1. But they are nothing like as central as they would become in what we sometimes call the inter-testamental period, and in the subsequent history of Judaism and Christianity. Nor are these older figures given anything like an individual identity.

That lack of personal identity troubled later scholars, who helpfully tried to supply angelic names retroactively. Genesis 18, for instance, records that three men visited Abraham. By piecing together the numerical value of the words in the text, medieval Jewish Qabalists had no doubt that their names were Gabriel, Michael and Raphael. 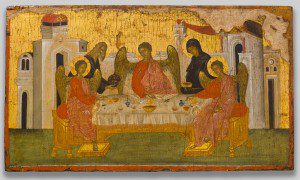 When did angels acquire identities and names, and why? When did angels become individuals, and when did they first appear in the familiar groups of four or seven lead archangels? Did the change occur because of developments within Judaism itself, or from outside influences? I will suggest that in this as in so much else, the two centuries or so preceding Jesus’s time constitute a revolution in Jewish faith and practice.

To begin with the date, angels in the form we know them probably appeared during the third century BC, and by the second they were a standard component of religious lore that they could be introduced without explanation or justification.

In the Bible as we have it, named angels first make their appearance in the book of Daniel. In 9.21, Gabriel appears as a man who explicates the sage’s visions, while the “chief prince” Michael comes to Daniel’s aid (10.13). Scholarly consensus dates these passages to the time of the Maccabees, around the 160s BC. The Jewish Encyclopedia claims that “The writer of the Book of Daniel was the first by whom angels were individualized and endowed with names and titles.” 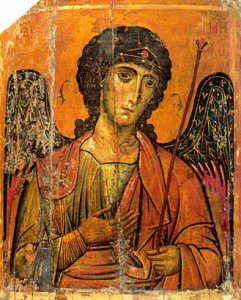 Angels are also taken for granted in the Deuterocanonical Book of Tobit, which sets the holy Raphael against the evil Asmodeus. Raphael, moreover, introduces himself thus: “I am Raphael, one of the seven holy angels who present the prayers of the saints and enter into the presence of the glory of the Holy One” (12.15). The problem is that the book is difficult to date. A consensus today would place it in the first half of the second century, perhaps not far from the composition of Daniel.

But angels also abound in plenty of scriptures and pseudo-scriptures from around this time, and indeed somewhat earlier. They reflect a change in the character of prophecy, which in Biblical times was ascribed to God himself (“Thus says the Lord”). From the third century onwards, though, revelations are usually ascribed to angels, perhaps because God himself had by this point simply become too exalted a figure to be imagined communicating directly with humanity. Classical prophecy evolved into the later genre of apocalyptic, in which angels played a central role.

In the first half of the second century, the influential text known as Jubilees offered a detailed taxonomy of the angelic universe, albeit lacking specific names:

By far the most important text in this story, though, was 1 Enoch, which I will discuss in my next post.