Well, I am overstating a bit. No one can really cancel Christmas, as the Grinch so famously discovered.

But the public celebration of Christmas can be cancelled, which is what happened in England during the seventeenth-century Civil War.

Here’s the story in brief–as related by Diane Purkiss in The English Civil War: While Charles I was fighting during the 1640s for his crown (which he would lose along with his life in 1649), an increasingly radical Parliament governed England. In the words of Purkiss, “that transhistorical killjoy a Parliamentary subcommittee” was created in 1643 to reform the Church of England. It regarded the liturgical calendar of medieval Christianity as both a symbol of Catholicism and a distraction from the Gospel. Sunday was the only holy day worth honoring.  All other festivals, including Christmas, should be cancelled.

Of course, this was easier said than done. Christmas was a beloved holiday revered in Tudor England. Asking people to give up Wassailing and Twelfth Night cake, not to mention their days off work, proved nigh impossible. Many people simply ignored the parliamentary decree of the “Solemn League and Covenant” subcommittee in 1643 and refused to go to work on Christmas day. Parliament cracked down in 1644 with an ordinance enforcing the Sunday fast day instead of the usual Christmas feast; in 1645 Parliament again declared Sunday and occasional celebrations as the only recognized holidays; finally in 1647 Parliament issued an ordinance officially cancelling all Christmas and Lenten celebrations, even arresting clergy preaching Christmas day sermons.

Despite initial resistance, this “War on Christmas” almost succeeded. Purkiss argues that the death of Oliver Cromwell in 1658 is what really “saved” Christmas (my apologies to Kirk Cameron’s movie last year). Although the ordinances were never fully realized–mobs forced Christmas celebrations in some areas–and even though the popularity of Edward Fisher’s 1649 defense of Christmas–which sold 6000 copies–suggests continued support for the holiday season, Purkiss argues that most people were beginning to conform “sulkily” by the 1650s. As Purkiss writes, “if the republic had lasted ten years longer, the old festive calendar would have been dead beyond recall.”

So seventeenth-century Christians cancelled public celebrations of Christmas because they were seen as more secular (Catholicism was seen as “popery,” not legitimate Christianity) than sacred. In a hauntingly similar way, modern Christian groups–like the American Family Association (AFA)–boycott many public demonstrations of Christmas because they are also seen as too secular. For example, the AFA 2015 “Naughty or Nice list” helps consumers take action against companies that  are not “Christmas-friendly” enough in their stores and advertisements.

In the midst of all these “wars” on Christmas, I can’t help but think about John Mirk’s late medieval sermon for “The Nativity of our Lord Jesus Christ.” It declares: “Good men and women and Christian creatures, as you hear and see, this day all holy church sings and reads and makes melody in remembrance of the sweet birth of our Lord, Jesus Christ…the prince of peace, who came to make peace between God and man, between angels and man, and between man and man.”

The Christmas of 1647 is forever marked by a spirit of strife.  Christians, complaining that traditional Christmas was too “popish” and secular with sporting games and revelry (and with great restraint I am refraining from commenting on more recent complaints about red coffee cups….), literally fought over the celebration of Christ’s birth. I can’t help but wonder how history would have been different if, instead of marked by war among Christians, the Christmas of 1647 had been marked by the spirit of the baby in the manager: “our Lord, Jesus Christ…the prince of peace.”

December 17, 2015 The King of Beaver Island
Recent Comments
19 Comments | Leave a Comment
"What is your source for the claim that the US is the 12th least religious ..."
Lark62 Religion’s Sudden Decline
""Religion" as a social club has indeed had its day. It isn't just because people ..."
stefanstackhouse Religion’s Sudden Decline
"Hello Curt, Thanks for your thought-provoking reply. I believe that your reference to tribalism is ..."
Christopher Tounsel Chosen Peoples: Christianity and Political Imagination ..."
"There is prudent caution in accepting new revisionist history.Today's political climate has used revisionism to ..."
Let's Translate This! All History Is Revisionist History
Browse Our Archives
get the latest from
Anxious Bench
Sign up for our newsletter
POPULAR AT PATHEOS Evangelical
1 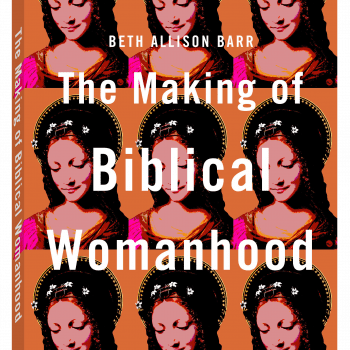 Evangelical
The Making of Biblical Womanhood: The Introduction
Anxious Bench

Evangelical
The Cost of Complementarianism: An Interview with a...
Anxious Bench
TRENDING AT PATHEOS Evangelical

Rocket attacks and violent riots escalating in Jerusalem:...
“A struggle is now raging over the heart of Jerusalem,” Israeli Prime...
view all Evangelical blogs
What Are Your Thoughts?leave a comment
Copyright 2008-2021, Patheos. All rights reserved.
error: Content is protected !!