The Modern Roots of “Pagan” Easter

In the late nineteenth century, a Cambridge scholar sat at his desk and wove a brilliant story about comparative religious practices.

“ALL over Europe,” he argued, “the peasants have been accustomed from time immemorial to kindle bonfires on certain days of the year, and to dance round or leap over them. Customs of this kind can be traced back on historical evidence to the Middle Ages, and their analogy to similar customs observed in antiquity goes with strong internal evidence to prove that their origin must be sought in a period long prior to the spread of Christianity.”

In other words–claimed this Scottish Classical scholar, folklorist, and social anthropologist–many religious traditions and celebrations (including those connected with Christianity) have pagan roots.

As one of his proofs, he used an example about Easter. He wrote, “On the afternoon of Easter Saturday the lads collected wood…in the middle of the pile they set up a tall wooden cross all swathed in straw. After the evening service they lighted their lanterns at the consecrated candle in the church, and ran with them at full speed to the pyre… The first to arrive set fire to the heap… As the flames rose the men and lads rejoiced and made merry, shouting, “We are burning the Judas!” The man who had been the first to reach the pyre and to kindle it was rewarded on Easter Sunday by the women, who gave him coloured eggs at the church door. The object of the whole ceremony was to keep off the hail.”

This is an amazing account. It is compelling to read, as one can almost see the flickering flames of the consecrated tapers licking the bonfire and leaping into the night sky. It also manages to incorporate the sacred space of the Christian church (the revelers first go to Easter Eve services, lighting their lanterns from the altar candles) with a ritual of human sacrifice (pretending to burn Judas), the familiar Easter custom of decorated eggs, and a superstitious (dare I say pagan?) agricultural fertility ritual.

The scholar’s name was James Frazer.

The compelling story he wove in 1890 was The Golden Bough: A Study in Comparative Religion.

Part of the tale he told was of how commonalities among religious beliefs and practices today are rooted in ancient pagan fertility cults.

As he wrote in his chapter on Oriental Religions in the West: “the coincidences of the Christian with the heathen festivals are too close and too numerous to be accidental. They mark the compromise which the Church in the hour of its triumph was compelled to make with its vanquished yet still dangerous rivals.” Christianity, explained Frazer, accommodated paganism to make it more attractive to converts–“absorbing” the pagan elements that it had been designed to suppress. Frazer suggested that Christians “borrowed” Christmas “directly from its heathen rival.” Likewise, he argued, the Church assimilated “the Easter festival of the death and resurrection of their Lord to the festival of the death and resurrection of another Asiatic god [Attis] which fell at the same season.”

But this story he told of Christian accommodations of pagan practices was simply that: a story.

Cambridge Classical scholar Mary Beard in 1992 summarized criticism of The Golden Bough by Edmund Leach, retired chair of Anthropology in Cambridge: “Frazer commonly rewrote or improved his sources in order to give the impression that they backed up more strongly his own tendentious theories.”  Beard herself writes: “a large proportion of The Golden Bough is inadequate, as well as irrelevant and (at least in the third edition) monstrously prolix by any reasonable standards of accuracy.” (Beard’s 1992 article in Comparative Studies in Society and History 34:2). Similarly, Marc Manganaro in a 1989 article in the Yale Journal of Criticism (3:1) summarized scholarly attitudes toward Frazer’s “method and ideas” as “roundly attacked by leading anthropologists since the turn of the century.” Even more recently in 2005, historian Tom Pettit declared that “the prestige of The Golden Bough was short-lived among anthropologists.” He continues, “The evidence cited was often casual observation rather than the product of scientific fieldwork…indeed, on close examination of Frazer’s sources Joseph Fontenrose could find no certain instance in the Old World, ancient or modern, of an annual or periodic sacrifice of a’divine king’ to promote the fertility of his people and land.” (Nordic Journal of English Studies, 4:2).

Frazer’s theories were far more wrong than right. In fact, Frazer’s work seems to belong more to the field of literary criticism than anthropology or history.

Yet the influence of Frazer’s ideas on popular beliefs has been profound.

Ronald Hutton, in his Stations of the Sun, writes how scholars abandoned the study of folklore at the same time that they dismissed Frazer’s theories. Enthusiasts and amateurs convinced by the theories of pagan survivals stepped into the gap. As Hutton writes, “enthusiasts from other disciplines (or none), who continued to interpret calendar customs in the old terms, and who dominated the discussion of folk rites and practices, and the public perception of them, until the 1970s. In that decade the very popular series of books on county folklore…treated seasonal customs as survivals from an almost wholly amorphous past, with virtually no sense of chronological perspective. So did coffee-table volumes upon the subject like those by Homer Sykes, Brian Shuel, and the Reader’s Digest team. Other works from these years, such as Ralph Whitlock’s In Search of Lost Gods, played up the theme of pagan origins without any further attempt to investigate it; the ‘search’ consisted of no more than a portrayal of surviving customs.”

The idea that a lost world of paganism, bubbling under the thin veneer of Christian practices and traditions that had supplanted–even copied–it, had become firmly rooted in popular culture.

So, you are probably asking, what exactly does this have to do with Easter?

I would argue it has nothing to do with Easter itself. We know that Christians were celebrating the Resurrection of Christ definitely by the 2nd century, probably by the 1st century. We also know that the only early historical reference to Easter having a pagan connection is through Bede’s 8th century comment about the goddess “Eostre” (see my previous post). Scholars do disagree about the accuracy of Bede’s statement. But even if Bede is correct about the name of the Resurrection celebration stemming from the name of a pagan goddess (as some excellent scholars have argued in contrast to Hutton), it does not negate the focus of the Easter celebration on the Risen Christ. Indeed, Christians were celebrating the Resurrection (just check out the Quartodecimanism Controversy) long before Bede’s mention of the shadowy goddess “Eostre”.

So, again, what does The Golden Bough have to do with Easter?

The profound popularity of Frazer’s book helped shift cultural perceptions about Christian holidays like Easter. Instead of seen as firmly rooted in the Christian past, Christian holidays–despite continuous scholarly debunkings of Frazer’s theories–were now tainted by suspicions of paganism. Indeed, even the Christian community began to believe that Easter celebrations and traditions, instead of linked to the Risen Christ, were linked to the worship of pagan gods. The influence of Frazer’s book was far wider reaching than probably he ever imagined……

Quite a legacy for a fairy tale.

I, for one, will eat my chocolate eggs without any fear that I am unknowingly participating in an ancient pagan religion. I hope you will too.

(The opening Frazer quotes are from the 3rd edition, Chapter 62: The Fire Festivals of Europe.)

March 22, 2016
The Bible: Mass Distribution and Massive Ignorance?
Next Post 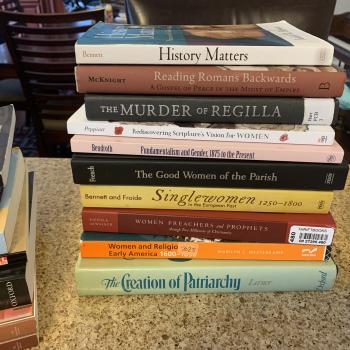 Evangelical
Because it is Time for Christian Patriarchy to...
Anxious Bench

Evangelical
Because We Have Made God Too Small: A...
Anxious Bench
TRENDING AT PATHEOS Evangelical