I’ve already spoken my piece on the presidential candidacy of Donald Trump at my own blog, and don’t especially want to make political arguments in my role here at The Anxious Bench. Indeed, I can think of few things I enjoy less than discussing politics. (Hopefully, I’ll still be enjoying a 10th anniversary date with my wife when Trump takes the rostrum tonight to accept the Republican nomination. She’s put up with enough of my angst about this election as it is!) But I do think readers may be interested that Trump’s candidacy has stirred up a debate among historians about the nature of the discipline of history.

Earlier this month, a group calling themselves Historians Against Trump distributed an “Open Letter to the American People” that began in this way:

Almost 800 history professors, social studies teachers, museum professionals, independent scholars, and graduate students, and others signed the letter, with more (200+ at the moment) continuing to add their names at an iPetition page.

You’ll find my name as a signatory. As far as I can tell, I’m the only person from this blog’s masthead to sign the letter, though our co-founder and former contributor John Fea joined me.

So first, I want to make clear that, in signing on, I did not mean to speak for my Bench-mates. Nor did I mean to imply that they, or other historians, are somehow failing the discipline if they support Trump or oppose him in other ways. (And you can certainly oppose Trump without signing this letter — cf. another founder of this blog, Tommy Kidd, who’s as vocal a Never Trump Republican as I know.) 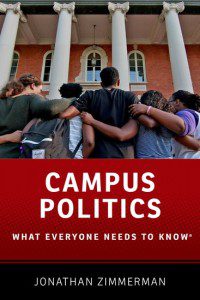 Indeed, as much as I believe that voters can have good reasons for supporting a bad candidate, I think there are excellent arguments against historians signing such a letter. For example, historian Jonathan Zimmerman (New York University) “yields to no one in his disdain for Donald J. Trump” and yet refuses to sign an open letter that “indulges in some of the same polarized, overheated rhetoric used by Trump himself.” D.G. Hart (Hillsdale College) believed that “to be so outspoken about a guy like Trump just doesn’t take all that much insight or courage.” And in explaining his decision to sign the letter, John Fea gave equal time to Michael Kugler of Northwestern (IA) College, who wondered if we were unfairly singling out one candidate:

If as you say “historians, as historical thinkers, have a LOT to offer when it comes to critiquing political candidates”, why haven’t other candidates who probably exhibit equally strained relations with historical method, subtlety or evidence provoked the formation of a similar group as Historians Against Trump?

As I wrote at my own blog in trying to explain my conflicted reasons for signing, I view this as an exceptional case:

…If all I’m doing this election season is signing open letters against presidential candidates, I’m not being faithful to my callings as historian and professor.

Indeed, I’m not sure I would have signed any such letter directed against any other presidential candidate. There have been three presidential elections contested since I finished my PhD and took my position at Bethel. I won’t say I found both major party candidates in each election equally palatable, but I could have conceivably voted for each. None was so objectionable that I’d have risked conveying the mistaken idea that I believe history exists primarily to “teach lessons for the present,” or that my goal as a professor is chiefly to persuade students, alumni, fellow church members, relatives, etc. to vote one way or the other.

Or as historian Katy McDaniel put it, in another of John’s recent posts: “To my way of thinking, historians should not *routinely* publicly comment on specific political candidates in a campaign season in this fashion. However, there are times, there are times.”

This, I concluded, was one of those times:

That I am willing to run those risks this year should underscore my conviction that Donald Trump is a uniquely unqualified and dangerous candidate for what remains the most powerful position available to any human being. And I arrive at that troubling conclusion in part — not whole — because of my position as a historian and professor.

I won’t rehash my reasons for reaching that conclusion, but they emerge from my convictions secondarily as a historian, and primarily as one of the 20% of evangelical Christians who will not be voting for Donald Trump. Indeed, when History News Network quoted me in its recent overview of this debate among historians, it chose the section of my post that emphasized my religiously-motivated concerns.

But I do think that this debate raises important questions about the role of the historian and the nature of our discipline. After critiquing (not unfairly) my emphasis on empathy as an outcome of historical study and before contesting my argument that empathy ought to be a criterion for leadership in a democracy, Hart observed: “What is striking is how even professional historians can make history be what they want it to be.”

Now, I’m not sure it’s actually all that “striking.” It’s not like all historians affirm a detailed creed written on stone tablets that have been handed down from Herodotus and Thucydides (or from Ranke, the Beards, or even Marsden and Noll) to generation after generation. What it means to be a historian has been debated as long as people have been calling their way of interpreting the past history. Not surprisingly, the practice of history must itself be historicized.

It seems to me that the Historians Against Trump debate has raised at least two evergreen questions that are by no means settled within our guild:

• Does our training and expertise as historians give us any special insight into current events? Philosopher Francis Beckwith, one of Beth and Philip’s vocally anti-Trump colleagues at Baylor University, tweeted that “historians are experts on the past. So, tell us what you think of 2016 in a decade.” But the letter’s drafters claim that historians can draw “lessons of history” that are pertinent to the 2016 campaign and the Trump candidacy.

• What is our role in society, or in a democratic political system? Historians continue to debate the relative importance of engaging “the public” — or, better, “publics” — beyond what we do as scholars and teachers. (Again, not a new debate: here’s a nearly 20-year old essay on the subject by Joyce Appleby, then-president of the American Historical Association.) Should that include more active participation in electoral politics?

In my post, I quoted the venerable John Hope Franklin’s claim that historians could claim to act as “the conscience of his nation, if honesty and consistency are factors that nurture the conscience.” Do you agree? If so, is something like this open letter an appropriate way of historians playing that role?

Both from professional historians and others who engage with the past, I’d appreciate responses here. Strongly as I feel about Trump, I don’t actually feel that strongly that I did right to sign the open letter.