The Anxious Bench’s Favorite Historic Sites East of the Mississippi

We’ve dabbled in travel advice over the years — e.g., in 2012 Philip suggested we spin off “Anxious Tours“ to religious history sites like the Oneida Community, and I mentioned some of our sabbatical travels last fall in a post on teaching history to six-year olds. But the members of The Anxious Bench have never collaborated on something like Time‘s recent list of historian-approved historic sites to visit.

So today and tomorrow we’re going to join forces to help our historically-minded readers plan their summer travels — starting with some sites east of the Mississippi.

Saugus Iron Works is worth a stop for any in the Boston area or visiting the beach towns north of it. The “historical” character of New England is part of the region’s draw, but regrettably, for all the emphasis Puritans and Pilgrims get in early U.S. history, sites devoted to them often disappoint. In first-period homes focus goes to furniture, that table or tea set, or to the familiarity or weirdness of everyday life—hygiene or housekeeping pitched either as similar to ours or so strange—missing the opportunity to explain the thought world of the people who lived in these places. Other sites go awry by focusing too much on the first Thanksgiving and the Salem witch trials, as though that told the whole story. The NPS site at Saugus instead does what a historic site addressing Puritan settlement should do. In 1646 Massachusetts colonists led by the younger John Winthrop, in only the second decade of the colony’s existence, launched an iron works. What were people doing out in this wilderness, building a blast furnace and forge? The iron works presents numerous object lessons about these settlers: the extensive transatlantic connections and financing necessary to the enterprise, the economic goals of a colony that prospered in harsh climate without obvious staple crops, the technology of a people on the hem of the Scientific Revolution, and the strain of Christianity and work ethic that enabled it all.  With its rebuilt iron works, period home, and museum, the park presents both elites and laborers, saints and sinners, while helping to explain the kind of people these were. (Agnes)

Not all national monuments preserve ancient history. One of the most evocative historic sites in the US is at Shanksville, PA, the site where United Flight 93 crashed on September 11, 2001. The hijackers intended to destroy the US Capitol, and came very close, but they were prevented by determined intervention from passengers and crew – none of whom survived. Immediately after 9/11, the crash site became the destination for popular pilgrimage, and a wholly spontaneous memorial sprang up, tended lovingly by local people. People left cherished possessions: teddy bears, Mickey Mouse figures, football jerseys, Christmas tree angels, flight attendant uniforms – not to mention bricks taken from a shattered Taliban stronghold in Afghanistan. Someone put together an army patch for “Firebase 93,” proclaiming that the passengers were the precise equivalent of military forces on the front line in Vietnam. Today, that old spontaneous site has been replaced by the much more formal Flight 93 National Memorial, under the National Park Service. If you ever go to Shanksville, you may not manage to see the whole place, not because it’s too large or complex, but because it is so wrenching. You still see people so utterly overwhelmed by emotion that they cannot complete their visits and have to return to their cars. There are a lot of tears. I offer a true story from my own observation: a woman standing at the old shrine with her young daughter, tears streaming. The girl asks why mommy is crying. Why are you sad? No, she explains, I’m not sad, I’m just proud that our country had people like this. (Philip)

If you find Colonial Williamsburg overcrowded or overpriced, then brave much smaller crowds for many fewer dollars by touring the two sites on either end of the beautiful Colonial Parkway: Jamestown and Yorktown. One admission fee covers both, and everyone under 16 enters for free. When our family visited them last fall, we reversed the chronology and started with the Yorktown battlefield. (And yes, we sang along to the Hamilton soundtrack as we pulled into the visitor center parking lot.) Even if you bike or drive the full route, the Yorktown site is remarkably small, reminding those of us accustomed to battlefields like Gettysburg or Verdun of the relatively short ranges of 18th century weaponry. And our kids got a kick out of emulating America’s “ten-dollar Founding Father” and storming a not-exactly-impenetrable British redoubt. (“We will fight up close, seize the moment and stay in it / It’s either that or meet the business end of a bayonet!”) But the real highlight was Historic Jamestowne, where the kids roamed the ruins, posed with a statue of Pocahontas (apocryphally a distant ancestor on my dad’s side), sifted through bits and pieces from the archeological dig, and learned about slavery and cannibalism at the Archaearium. All that plus the glass blower just up the road.

If you are visiting these or other National Park Service sites with children (roughly ages 5-13), be sure to ask about the Junior Ranger Program. More on that tomorrow. (Chris)

Located in the scenic bluegrass region of central Kentucky, Shaker Village of Pleasant Hill is a terrific summertime destination. My children love hiking the dozens of miles of trails, playing in the sparkling cold creeks, climbing limestone cliffs, and doing crafts in the cool cellars of historic buildings. I love the incredible, if a bit pricey, meals (the ingredients come straight from the Shaker garden out the window) at the Trustees’ Table restaurant and listening to tour guides describe the millenarian sect’s inventions (did you know the Shakers invented the circular saw, the clothespin, metal pens, the Shaker peg, and selling seeds in paper packets?) and their distinctive practices having to do with the End Times, gender roles, sex, and agriculture. We all love the beautifully preserved grounds and taking rides on the Dixie Belle, a 115-passenger paddlewheeler, to see picturesque views of steep palisades that line the Kentucky River. It’s not exactly an electrifying place to visit, if your idea of fun is riding the Banshee roller coaster at King’s Island, but it is an intellectually rewarding and quietly elegant destination.

If you do go, first read the wonderful novel The Believers, which depicts a somewhat less utopian version of the community than a visit to the bucolic Shaker Village does. Then before you leave, visit the gift shop to buy Shaker brooms so sturdy that they stand upright on their own. And on your way to or from Shaker Village, visit other area sites such as Cane Ridge, Fort Booneseborough, and the Henry Clay Estate. (David)

I love Nashville, and visit frequently (thanks to my sister living there). I am very familiar with most of the tourist attractions, coffee shops, and even several of the churches. My favorite site, hands down, is the Golden Athena at Centennial Park. Now, this is a unique historic site. Clearly neither the Parthenon that houses the Athene nor the cult statue itself are ‘authentic’. The Parthenon is a full-scale replica of the ancient Athenian site, built in 1897 as part of the Tennessee Centennial Exposition. Originally it was created from plaster, wood, and brick, but then recast in concrete because it proved so popular among the Nashville residents. In 1990, Nashville decided to make the Parthenon even more authentic by adding a statue of the Athena Parthenos. Athena stands 42 feet tall, is gilt with more than 8 pounds of gold leaf, and was based on ancient depictions of the original Athena Parthenos. She is truly magnificent, and probably the closest we can get to what an actual ancient Greek cult statue looked like.

So, if you are in Nashville, I strongly recommend a visit. First, the Nashville Parthenon is a window into city history of Nashville itself, as it actively imagined itself as the “Athens of the South.” Second, it really helps us better understand ancient Greek (or simply pagan) religion. Modern Christian churches do not help us understand why ordinary Greek citizens would have believed in the power of the Greek gods. But standing at the foot of the Golden Athena, it is easier to understand the uphill battle that Paul was fighting when he preached at the Athenian Acropolis. Finally, it is cheap ($7), has a short and great museum explaining the creation of the Parthenon and the cult statue, and is situated in the beautiful Centennial Park with plenty of room to spread a picnic and let the kids run and play. (Beth) 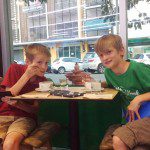 June 7, 2017 A Farang Scholar in Thailand
Recent Comments
0 | Leave a Comment
Browse Our Archives
get the latest from
Anxious Bench
Sign up for our newsletter
POPULAR AT PATHEOS Evangelical
1