In 1891, Herman Melville published his final book, a collection of poems entitled Timoleon. I want to focus on one of these poems, which initially seems quite mysterious. But it can be understood, if we appreciate the prevailing historical views of the time about heresy and sectarian religion. I also want to touch on a theme that I will be exploring in more detail in coming posts, namely the wide-ranging influence of Theosophy in these years.

The Melville work in question is entitled Fragments Of A Lost Gnostic Poem Of The Twelfth Century, and that title itself is truly odd. Here is the (brief) full text:

Found a family, build a state,

The pledged event is still the same:

Matter in end will never abate

And energy the child of hell:

The Good Man pouring from his pitcher clear

But brims the poisoned well.

Whatever we think of the poem as literature, there is one major stumbling block, namely: did Gnostics actually exist in the twelfth century, or anywhere near that period? Did Melville think that they did? If so, was he wildly ignorant of the actual history, or was he using the Gnostic term in a way that was very well informed, if unconventional? Was he a very bad historian, or a very acute one? I will argue the latter.

As I have often remarked, people in the later nineteenth century actually knew a good deal about Gnosticism from Patristic sources, and from more recent documentary finds from Egypt and elsewhere. Plenty of books on the subject were appearing, as well as original texts and translations. Gnosticism exercised a powerful appeal to esoteric and occult figures. Timoleon is dedicated to the great American occult/Symbolist painter, Elihu Vedder. Had he wished, Melville could have used a battery of authentically Gnostic names, buzzwords, and ideas. (For “Gnostic” approaches in Melville and his contemporaries, see Arthur Versluis, The Esoteric Origins of the American Renaissance (Oxford University Press, 2001).

Yet there really is not much in Melville’s poem that is particularly Gnostic in any historical sense. He expresses the general view that the world is under the weight of dark material forces that prevent the success of good or the forces of Light. It is a deeply pessimistic work. I am not sure, though, why he cites it as Gnostic. “Dualist” would be a much better description.

More curious is why it is allegedly “of the twelfth century.” All the Patristic sources concerning Gnosticism were focused on the first three or so centuries of the Christian era. Now, there were medieval Dualist movements in the twelfth and thirteenth centuries like the Bogomils and Albigensians, and many writers (including myself) have suggested possible continuities from ancient Gnosticism. I have even spoken of the Dualist/Gnostic continuum. In that sense, you could even imagine an Albigensian poem of the twelfth century, say, being described as Gnostic in a very broad sense.

Is that really what Melville means us to think? Is he actually using Gnostic as a synonym for Albigensian? Did nineteenth century historians that he might have read draw those Gnostic/Dualist parallels as I have been suggesting?

The Albigensians were a popular topic in nineteenth century historical and polemical writing. They had a strong appeal for Protestant and especially evangelical writers, who saw them as proto-Protestants ruthlessly suppressed by the evil Roman Catholic Inquisition. Obviously, those writers were not going to present the Albigensians as anything other than orthodox Christians. But plenty of other authors and mainstream historians held different views.

My first thought was Melville was reading popular French historians like Jules Michelet, who admired the Albigensians. Did Michelet ever draw that Gnostic connection? But I have better and more certain sources. In 1848-49, Protestant theologian and historian Charles Schmidt published his substantial Histoire et doctrine de la secte des Cathares ou Albigeois, which was discussed at length in the North American Review of April 1850, 443-473. The anonymous reviewer begins by noting that

The origin of the Cathari has been the subject of much controversy; by some, they have been regarded as the immediate descendants of the early Manicheans; others have maintained that they derived their doctrines from some Gnostic sect, or from the Priscillianists and the Paulicians or Bogomiles. Mr. Schmidt ascribes to them a Graeeo-Slavonic origin. According to him, their doctrines originated in Bulgaria at the beginning of the tenth century.

That Gnostic interpretation held by cryptic “others” was widespread and easily available. It was argued by Americo Palfrey Marras, who in 1865 published The Secret Fraternities of the Middle Ages, and who drew Gnostic/Dualist analogies and continuities on virtually every page. In The Anatomy of Negation (1889), Edgar Saltus wrote that “The Albigenses, who came from a village in Languedoc, at a time Michelet has noted, when Languedoc was a Babel, professed a mixture of Gnosticism and Manicheism.”

Another author who was very widely read in these years was Helena Blavatsky, co-founder (in 1875) of the Theosophical movement. In her Isis Unveiled (1877), she wrote that “The votaries of the ancient worship were persecuted and put to death on charges of witchcraft. The Albigenses, descendants of the Gnostics, and the Waldenses, precursors of the Protestants, were hunted and massacred under like accusations.” Melville was an omnivorous reader. Had he read Blavatsky? Even if not, he could certainly have met Theosophical devotees: the movement was very voguish in the US in the 1880s. Like the Theosophists too, the later Melville had a strong interest in Buddhism (as indeed did Elihu Vedder). In fact, that same Timoleon volume also included Melville’s short poem, “Buddha.” Like the Theosophists (and like Vedder), Melville was also fascinated by ancient Egypt, its secret Wisdom and its Pyramids. Timoleon includes Melville’s poem “The Great Pyramid.”

The point is that at least some writers were explicitly claiming that Gnostic-Dualist continuity, which was just in the atmosphere in the mid-late nineteenth century. And that, presumably, is where Melville acquired his seemingly daring historical identification of Gnostics with Dualists/Albigensians. I don’t know if he took the idea directly from Theosophy, but I would be interested what his contacts were with that movement.

To read Melville’s poem, then, we need to realize that he meant Albigensians and Dualists, and not what we would normally call Gnostics. 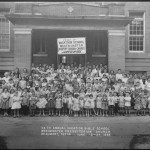 June 20, 2017 A Brief History of Vacation Bible School
Recent Comments
0 | Leave a Comment
"Thank you for this. History has never been "objective," because its authors have always written ..."
Tschussle Am I A Historian? : On ..."
"Good points! Except for this: "History taught me that what keeps capitalism going is often ..."
Roger McKinney Am I A Historian? : On ..."
"What I find astounding is the fact that these rare and ancient documents have been ..."
jeff q Google’s Revolution in Historical Research
"Clearly it was the forces of patriarchy who sulllied the image of Mary Magdalene, and ..."
Michel Down with the Patriarchy! Remembering the ..."
Browse Our Archives
Related posts from Anxious Bench