American Christians invoke John Wesley on all manner of subjects including sanctification, the sacraments, and social holiness. On this most sacred of American holidays, let us consider Wesley’s views on the American Revolution.

Wesley, initially ambivalent about American independence, landed in favor of loyalist political arguments. He pointed out that the colonists held the same liberties as other constituent parts of the British empire. Why did these colonists refuse to pay their taxes and insist on destroying “ship-loads of tea” when settlers of all other far-off British territories did not exercise the right of representation in Parliament? In his 1775 “A Calm Address to Our American Colonies,” published three months after fighting at Lexington and Concord, Wesley rebuked the American claim that taxation was tyranny, and he pointed to the many liberties the colonists enjoyed under British rule.

Second, Wesley opposed the partisan fervor of the American patriots. As ministers preached sermons that stoked the fires of war, Wesley cautioned about the consequences of out-of-control protests. He was not impressed by mobs who were “screaming out for liberty.” Too many patriots were “foaming with rage against their quiet neighbours, ready to tear out one another’s throats, and to plunge their swords into each other’s bowels.” In his 1775 sermon “National Sins and Miseries,” Wesley worried that “reason is lost in rage; its small still voice drowned by popular clamour.”

Third, Wesley judged that the Revolution allowed “no liberty of conscience.” Not only were American patriots “mad with party-zeal” against King George, they also fomented against neighbors who disagreed. “None dare print a page, or a line, unless it be exactly conformable to the sentiments of our lords, the people.” What were the allowable sentiments? “None must dare to utter one word, either in favour of King George, or in disfavor of the idol they have set up—the new, illegal, unconstitutional government, utterly unknown to us and to our forefathers.” Public sentiment, he worried, did not allow freedom of speech or conscience on matters of the Revolution.

Fourth, Wesley suggested the irony of proclaiming American freedom as Americans themselves perpetrated slavery. In 1774, as political rhetoric for liberty accelerated in the colonies, he sought to appropriate the same logic on behalf of African slaves. “Are they men as well as we,” Wesley wrote, “and have they not the same sensibility?” The tyrannies of colonist slaveholders were significantly more inhumane than English authority. As historian Mark Noll would later observe, perhaps the only Americans who could legitimately “justify taking up arms to defend themselves” were enslaved African Americans, not their owners George Washington, Thomas Jefferson, and James Madison.

In short, Wesley dumped on the patriotic parade. He and many other Methodist preachers paid a high price for their dissent. Calling for Americans to be “peaceable” and “full of mercy and good fruits,” Wesley was denounced as “a wolf in sheep’s clothing, a madman, a chaplain in ordinary to the furies, a cunning fox, a Jesuit in disguise, and a Jacobite traitor.” One minister wrote, “If a person was disposed to persecute a Methodist preacher it was only necessary to call him a Tory and then they might treat him as cruelly as they pleased.” Perversely, Wesley was a pronounced a traitor for being loyal.

Wesley’s descendants in this country have eagerly partaken of American patriotism. American flags frame the fronts of Methodist church sanctuaries, and a nationalistic jingoism pervades many evangelical churches across the country. Perhaps remembering Wesley’s clear-eyed admonitions about violence and rebellion—and Christian perfection and love of enemy—can help modern Methodists become more circumspect about their nation’s myth of origin. 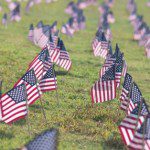 July 4, 2017
Does Patriotism Belong in Christian Worship?
Next Post

July 6, 2017 Exeter Cathedral and Collective Memory
Recent Comments
4 Comments | Leave a Comment
"And therein is the rub: a consistent Evangelical reading of the Bible does not fall ..."
Mike Stidham Ron Sider and the Fate of ..."
"The evangelical left failed mainly because neither major political party (most Democrats were more liberal ..."
Tony Ron Sider and the Fate of ..."
"No, because the socialist countries are not healthier by any measure. In fact, 40 million ..."
Roger McKinney Biblical Authority amidst American Christian Division: ..."
"All of this is the result of a combination of a perpetual cultivation of prejudice ..."
twitfer When the Cholulteca Folded onto the ..."
Browse Our Archives
Related posts from Anxious Bench