Does Patriotism Belong in Christian Worship?

“How can this not be a form of idolatry?,” asked our friend John Fea, about a Christian worship service last month that included flag-waving, indoor fireworks (!), and patriotic songs that made little or no mention of God. The church was First Baptist of Dallas, Texas, whose pastor, Robert Jeffress, went on to share the Kennedy Center stage with Pres. Trump at last weekend’s Celebrate Freedom Rally. “Millions of Americans,” claimed Jeffress, “believe that [Trump’s victory] represented God giving us our next chance, perhaps our last chance, to make America great again.”

(I wonder if Jeffress has read the most famous sermon by his most famous predecessor in the pulpit of First Baptist. In a 1920 address from the steps of the U.S. Capitol, on “Baptists and Religious Liberty,” George W. Truett strongly affirmed the separation of church and state, contrasting it to the “incomparable apostasy” of Constantinian Christianity, “the most baneful misalliance that ever fettered and cursed a suffering world.”)

As if that wasn’t bad enough, Trump’s campaign slogan then became the basis for an anthem sung by the First Baptist choir. This is how far we’ve fallen: singing songs of Babylon as if they were songs of Zion.

I don’t think idolatry is the wrong word here, nor that it’s an isolated danger. As Americans went to church this Independence Day weekend, I doubt that many of us experienced patriotism that naked. But we probably came closer than usual to conflating love of God and love of country.

In a 2016 Lifeway survey, almost nine in ten Protestant pastors said their churches do something different for the Sunday before July 4th. About two in three added patriotic music, and slightly smaller majorities recognized military veterans and military families. A third added some other kind of ceremony. (Indoor fireworks doesn’t seem to have been an option.) Altogether, 61% said it’s important to celebrate America in some such fashion on that Sunday, with the number much higher among Pentecostals (82%), Baptists (67%), and older ministers (78%).

To an extent, I’m sympathetic. At the Iowa church I was visiting two days ago, I sat next to a National Guard family for whom patriotism is no abstract ideal. I joined them in singing “Eternal Father, Strong to Save,” the military hymn that prays for the safety of the soldiers, sailors, and others who risk their lives for our security. For example, when we asked God to “hear us when we cry to Thee / For those in peril on the sea,” my thoughts turned to my cousins who have served in the Navy. (One did not survive his peril and now rests in a military cemetery not far from my home.)

But praying “Your children shield in danger’s hour” is one thing. I simply couldn’t bring myself to sing one of the preceding songs. For if “My Country, ‘Tis of Thee” belongs in Christian worship at all, it’s certainly not while partaking of Communion!

Among its many layers of meaning, that sacrament reminds us that we belong to the transnational Body of Christ, to the “holy catholic [universal] church” that we had just professed in the Apostles’ Creed. That community, and not this or any nation, is “God’s chosen people” (Col 3:12 NIV — one of our texts for the morning).

Pastors, if you’re planning a patriotic worship service tomorrow, you still have 24 hours to change your mind.

Is it any wonder that 53% of pastors conceded to LifeWay that their congregants sometimes love America more than God? In ways as large as what happened in Dallas and D.C. and as small as what I experienced in Iowa, American civil religion too often infiltrates American churches.

And that’s no small concern. You could easily update to early July what I wrote in late May for Christianity Today, simply substituting today’s holiday for Memorial Day:

…[Independence Day] is a festival of our nation’s civil religion, one of the many “constellations of rituals, ceremonies, and spaces that,” according to [Calvin College philosopher Jamie] Smith, “invest certain practices with a charged sense of transcendence that calls for our allegiance and loyalty in a way meant to trump other ultimate loyalties” (Desiring the Kingdom, p. 104). [Independence Day] is a time of national worship; approached heedlessly, it will tempt us to pledge to the nation-state the “total allegiance” that we owe to nothing and no one but God. 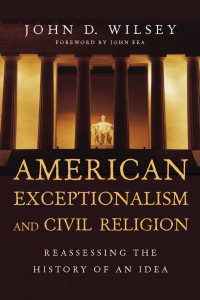 At the same time, I was willing to entertain historian John Wilsey’s argument that civil religion can also help foster a more healthy kind of patriotism: an “open exceptionalism” that “opens the door for citizens to acknowledge, to address and to rectify real American flaws because, in doing so, citizens express true love for country.”

John’s notion came to mind earlier in Sunday’s worship service, when a men’s choir sang “The Battle Hymn of the Republic” — like Memorial Day, a vestige of the American Civil War. Unlike “My Country, ‘Tis of Thee,” Julia Ward Howe’s hymn isn’t explicitly nationalistic. And while it’s certainly easy to get caught up in the martial music, it’s also possible to interpret its text less as a manifesto of triumphalism than as an exhortation to reform.

Here I highly recommend John Stauffer and Benjamin Soskis’ “biography” of the famous American hymn. Noting that it embodies both “urgent, even ecstatic hopefulness” and profound disappointment (since “if the Lord is coming, He has not yet arrived”), Stauffer and Soskis show how this abolitionist song “has been embraced as the anthem for nearly every single reform movement in American history, from temperance to civil rights and to the pro-life movement.” It’s a battle hymn that even antiwar activists have sung, exemplifying how it “has heralded the commencement of allegorical battles in which military combat merely provided a symbolic representation of the personal service necessary to usher in the Kingdom of God.”

So the next time this hymn shows up in worship (probably next July), I’d suggest that you listen especially closely to the third verse: 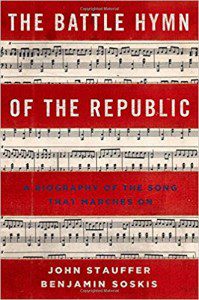 In the beauty of the lilies Christ was born across the sea,
with a glory in his bosom that transfigures you and me;
as he died to make men holy, let us die to make men free,
while God is marching on.

If you’re indeed willing “to die to make men free” — or, as modern hymnals tend to render it, “to live to make all free” — please sing that line not as a self-serving statement of defiance (as in: whatever it takes to preserve our religious freedom) but as a self-sacrificing pledge of commitment to Jesus’ mission of liberation.

Let the hymn remind you that the land of the free needlessly restricts many citizens’ right to vote — or renders their votes meaningless by gerrymandering. Let it prompt you to ask why the land of the free imprisons proportionally more of its citizens than any other country. Let it move you to help those languishing in the false freedom of poverty or addiction. Let it make you reflect on America’s obligations to global neighbors whose political and civil liberties are regularly violated.

Or if you happen to sing “America the Beautiful” later today — in Christian worship or in a civil ceremony of some sort — remember that whatever grace God has shed on this country is an undeserved gift, mercifully given to a nation whose “every flaw” we pray he will “mend.”

July 3, 2017
The Man with the Snake-shaped Birthmark
Next Post 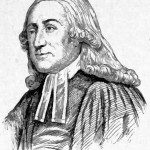 July 5, 2017 4 Reasons Why John Wesley Opposed the American Revolution
Recent Comments
18 Comments | Leave a Comment
"This is an issue that I have been puzzling over for a long time. Thanks ..."
Douglas Ward Peopling the Biblical World
"Clarke,I think you underestimate the number and severity of the disagreements Roger and I have ..."
Curt Day What is a Conservative Christian College? ..."
"So, "medieval glory"? Is the glory because some think it pretty...irrespective of genocides? The art ..."
Daniel Johnson How Did the Reformation Matter for ..."
"Here I am, five years late, seeing that you quoted and engaged with my comment. ..."
Adam Gonnerman Counting Baptists and Naming Baptists
Browse Our Archives
Related posts from Anxious Bench