Sola Fide: The Reformation Board Game

I’m a history professor, so I’ve done many nerdy things in my life. But I’m not sure anything can top what I’m about to describe. It involves a six-sided die, a seven-year old boy, and the 500th anniversary of the Reformation: 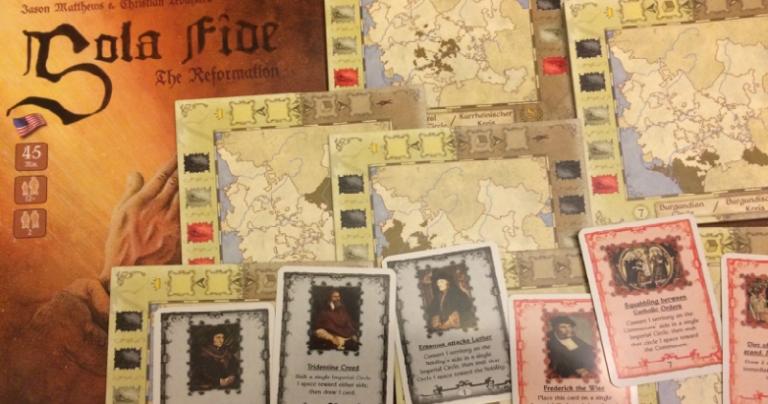 Yes, #Reformation500 has yielded a high-end tabletop strategy game: Sola Fide, from Stronghold Games. It actually came out last November, but stayed off my radar until last week — at which point I immediately ordered a copy from Amazon. It arrived Friday evening, and by Sunday afternoon, I had learned enough to teach the game to my seven-year old son, Isaiah. (The game is really intended for those aged 12 and up. But see this earlier post for evidence of the boy’s precociousness in this area.)

Two players — one Protestant, one Catholic — vie for influence in the Holy Roman Empire of the 16th century, deploying a mixture of religious persuasion and political manipulation. Each Kreis (circle) is worth 5 or 7 points.

Each player works with fifteen cards representing events from the history of the Reformation. Most are nonviolent, but the Catholic player has the opportunity to launch military actions. But that risks unintended consequences to be determined by the roll of a die. (“Oh,” said Isaiah’s twin sister, listening in, “so it’s like Pokémon.”) You can get a bonus point if you win a Kreis while it’s hosting a disputation between opposing theologians.

Once every territory has been awarded, you tally up the points and see whether the Church managed to snuff out Protestantism.

Rather than write a review, I thought I’d share a few highlights from our first game together. Note that the events happen out of actual historical sequence. (“What year does this happen?”, Isaiah asked. When I told him it started around 1517, he held up an event card and pointed out, “But the printing press was invented in the 1450s!” Again, I’m not sure I’d recommend this with the typical second grader.) As the instructions explain,

Sola Fide was never meant to be a detailed simulation of The Reformation — a very complex series of events.

Instead, this games offers a lot of period flavor via its cards.

With tongue planted firmly in cheek… here’s how it went for Isaiah and me:

Early advantage to the heretics: the publication of Luther’s On the Bondage of the Will converts all neutral districts in Upper Saxony. Fortunately, I can freely choose to press on until Holy Mother Church wins the day!

Huzzah! A revolt by the diabolical peasants of Lower Saxony freaks out fence-sitting nobles. The tide begins to turn…

Iconoclastic Protestants around the Empire start smashing images. For some reason, the rules state that this reduces the options available to me; from now on, I can keep no more than four event cards in my hand, not five.

Dangling before them the chance to confiscate church property, the drunken monk from Wittenberg lures the barons of his homeland to their damnation. This is most certainly true!

Another land lost! Apocalyptic fervor in the Upper Rhineland sparks another so-called reformation. Haven’t these peasants read Matthew 25 before? What’s not to understand?

Two minutes earlier, another of Luther’s ill-tempered diatribes brought Electoral Rhineland to the brink of apostasy. (“…perfectly free lord of all, subject to none… perfectly dutiful servant of all, subject to all”? What is this self-refuting nonsense?) But the well-timed intervention of some Capuchin Friars revived the loyalties of Franconia’s serfs. Seven points to Gryffindor… I mean, Rome.

We trade glancing blows for ten minutes: Swabian peasants get a taste for the German mass, but my investment in better seminaries improves lay-clergy relations in the Rhineland. Then a flurry of activity…

A Rhenish noble gets his hands on what passes for Protestant martyrology and forsakes the True Church.

But across the border, the ever-vexing king of France responds by issuing the Edict of Nantes. Then a few minutes later, some vote-trading in the imperial election manages to flip Austria to Luther’s side!

But when all hope seemed to be lost…

The divorce of Henry VIII sours a key Bavarian noble on the idea of messing with the natural order of things.

As the inspiring story of Teresa of Avila circulates among the peasants of that land, Protestant schemers maneuver for position at the court in Munich. It looks like Luther might yet prevail, only —

That’s right: nobody expects the Spanish Inquisition! Certainly not in Bavaria, where the inquisitors’ fear, surprise, ruthless efficiency, and almost fanatical devotion to the Pope is enough to win the tenth and last Kreis in the game.

October 9, 2017
On Mark Lilla's The Shipwrecked Mind
Next Post 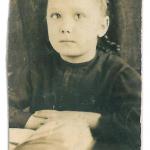 October 11, 2017 My Grandma and Colin Kaepernick
Recent Comments
0 | Leave a Comment
"Although (obviously!) not part of Christianity, I think the whole M*slim thing about images of ..."
Mo Fin Iconoclasts I Have Known, and Even ..."
"You come up with the most fascinating research projects and you always deal with them ..."
GEVeith Iconoclasts I Have Known, and Even ..."
"I think the ESV originated as a conservative alternative to the NRSV, but eventually marketing ..."
NorrinRadd The Gender Inclusive Bible Debate (Medieval ..."
"Why do we want texts of "beauty and transcendence"? Koine Greek was the *common* tongue. ..."
NorrinRadd The Gender Inclusive Bible Debate (Medieval ..."
Browse Our Archives
Related posts from Anxious Bench