Seeking Truth in a World “With Devils Filled”

“For our struggle,” wrote the apostle Paul, “is not against enemies of blood and flesh, but against the rulers, against the authorities, against the cosmic powers of this present darkness, against the spiritual forces of evil in the heavenly places” (Eph 6:12). So if I’m right that Christian higher education is meant to seek both truth and justice, shouldn’t I expect to find myself actively opposed by forces dedicated to deceit and injustice?

And yet most days I would never enter the classroom or library thinking that I’ve stepped onto a spiritual battlefield. I once sat in on the interview of a faculty candidate for another department; when he started to explain genocide in “demonic” terms, I quickly steered him to less supernatural (but no less disturbing) causes of mass killing.

So it was good for me to read David’s post last week, on African students at his university who declined to participate in Halloween festivities. “Many nonwestern Christians,” he explained, “live in a spiritually alive universe populated by active demons and angels.” They see their Halloween-enjoying Western sisters and brothers as being “naïve about the power of dark spirits.” 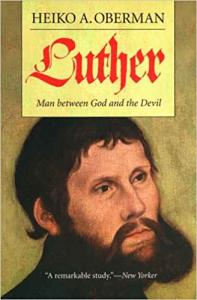 Likewise, my skepticism about spiritual warfare would probably seem naïve to the Western Christian who gave October 31st its other significance. Martin Luther lived in a world “with devils filled,” where “still our ancient foe / Doth seek to work us woe.” In the judgment of biographer Heiko Oberman, “Christ and the Devil were equally real to [Luther]: one was the perpetual intercessor for Christianity, the other a menace to mankind until the end.” But Oberman complained that “[i]n all modern classroom and textbook treatments of Luther, the Devil is reduced to an abstraction: be he a figment of mind or time. Thus the Evil One, as a medieval remnant, can be exorcized from the core of Luther’s experience, life, and thought” (Luther: Man Between God and the Devil, p. 104).

Why do historians like me tend to imagine away such personalized forces of evil? The Malaysian theologian Hwa Yung has observed that

the mindset of the western intellectual, shaped by modernity, the product of the Enlightenment, tended to be highly naturalistic and mechanistic. It could not encompass the spiritual dimension comfortably… Within such a worldview, the supernatural tends to be marginalized, whether it is miracles, answers to prayer, angels, demons, and sometimes even God himself.

…both biblical revelation and the sum total of empirical evidence from all over the world point to the ontological reality of [demonic] beings, even if we are to set aside Jewish apocalyptic language and the specific terms for demons as being culturally conditioned. The only culture or worldview that has systematically denied it is that of modernity in the west. And even then it has not been accepted by all in the west.

Indeed, such beliefs in the supernatural aren’t all that unusual among Americans, even the most highly educated among us. A 2013 YouGov survey found that 57% of people in this country believed that the Devil exists, including 70% of Protestants, 86% of born-again Christians, 72% of black Americans, and 51% of those with at least some graduate education. (People whose education stopped short of a high school diploma made up one of the few groups not to clear 50%.) Belief in demon possession was not quite as strong, but still cleared the 50% threshold for the overall population and most groups.

Likewise, about two-thirds of respondents to a 2007 Baylor survey said they “absolutely” (45.7%) or “probably” (22.0%) believed in demons. Among those who worshiped most regularly, the “absolutely” number jumped past 77%. A slight majority of those with graduate education were more skeptical, but nearly one in three of the most highly educated still had no doubt that demons were real.

So it’s been striking to hear Christian intellectuals from across the theological spectrum use such language to condemn racism. (Though perhaps meaning different things by it.) After the violence this past August in Charlottesville, Virginia, former Chicago Theological Seminary president Susan Thistlethwaite and Southern Baptist theologian Russell Moore described white supremacy as, respectively, “demonic” and “Satanism.” Earlier in the summer, Moore had used similar language to back an anti-racism resolution at the Southern Baptist Convention’s annual meeting.

The so-called Alt-Right white supremacist ideologies are anti-Christ and satanic to the core. We should say so. #SBC17

Now, that doesn’t mean we shouldn’t use natural means to understand the causes and consequences of racism and racialization. (“It is not enough,” continued Thistlewaite, “to just say white supremacy is demonic. That needs to be unpacked in a historical, theological and deeply cultural sense.”) A few weeks ago I was teaching Michael Emerson and Christian Smith’s book Divided by Faith: Evangelical Religion and the Problem of Race in America in a first-year general education course at Bethel. It took hard work just to get my white evangelical students to consider the empirical evidence of enduring, widening black-white divides, then to entertain the possibility that racial injustice has structural and systemic causes, not just individual sin that breaks relationships.

But in the chapter in which Emerson and Smith unpack evangelical views on race, they quote a middle-aged black Pentecostal named Otis, who recognized not only structural sin, but another cause of racialization: 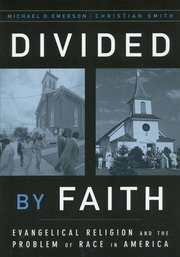 We then asked if group struggles, division, and inequality were due to individuals within the groups. Otis responded, “You can’t really say it’s an individual. It’s spiritual warfare going on. So quite naturally, people are going to come together in groups.” Affecting all groups of people, spiritual warfare was, for Otis, the underlying explanation for the racialized society…. Despite all the personal turmoil he has experienced on account of his race, he tells himself it is not individual people, but Satan warping systems and people to harm one another. His solution was and is to pray for help to endure and overcome suffering, to see the good that will come out of the bad. For Otis, because of its spiritual roots, racism is a poison passed on generation to generation, an evil spirit of racism, oppression, and injustice. People must stand together against the evil spirit with their faith. (p. 72)

Taking that statement to heart, I decided to start that class by praying for protection from the spiritual forces that would keep us from seeking truth and doing justice. That is, I decided finally to heed one of the few pieces of advice from former Bethel (and National Association of Evangelicals) president Carl Lundquist that I’d often ignored:

Most classes also begin with prayer. This is a recognition of the fact that in the pursuit of truth in any discipline, error often is reinforced by personalized forces of evil related to one whom Christ called the father of lies. In the classroom conflict between truth and error, supernatural forces also are involved and prayer is no longer a religious cliche.

I can’t remember exactly how I prayed. But I took inspiration from Luther, who began his mornings asking God to “…keep me this day also from sin and every evil… Let your holy angel be with me, that the evil foe may have no power over me. Amen.” 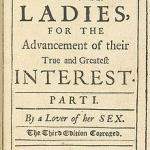 November 15, 2017 A Serious Proposal for Academic Conferences: Ban Harvey Weinsteins
Recent Comments
0 | Leave a Comment
"One way to look at lynching is to keep blacks under control. Lynching photos were ..."
Timothy Weston What We Can Learn from Pastors ..."
"A good friend is active in Calvary Chapel. I've got no skin in the game ..."
Karen Silver Who Is an Evangelical?
"I think you mean Kenneth Copeland, not Kenneth Coleman. The whole prosperity gospel, name-it-and-claim-it theology ..."
Dr_Grabowski Who Is an Evangelical?
"I am beginning to differentiate evangelicals. There is the Francis Collins brand of Evangelical whose ..."
Karen Silver Who Is an Evangelical?
Browse Our Archives
get the latest updates from
Anxious Bench
and the Patheos
Evangelical
Channel
POPULAR AT PATHEOS Evangelical
1