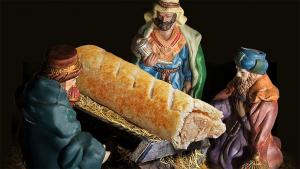 Greggs, the largest UK bakery chain, recently sparked outrage among Christians. It created a Nativity scene to help promote its 2017 Advent Calendar.  In one of the publicity shots, three (very white) wise men dressed in elaborate robes kneel by a straw-filled manger.  But instead of baby Jesus wrapped in swaddling clothes, the manger boasts a sausage wrapped in a pastry. This became the Sausage Roll Jesus controversy.

The Sausage Roll Jesus picture caused an immediate twitter uproar. Protesters called for a boycott against the bakery chain for advertising “its sick anti-Christian Advent Calendar.” “Disgusting,” “disrespectful,” “blasphemous,” “beyond insulting,” “deeply offensive on all sorts of levels,” and the very clear “Jesus is not a sausage” are just a few of the #BoycottGreggs tweets complaining about the Sausage Roll Jesus. Even Russell Moore, the president of the Ethics & Religious Liberty Commission of the Southern Baptist Convention, joined the tweet frenzy. He retweeted a Religion News Story arguing that “Jesus as a sausage roll echoes the Gospel of John.” Moore’s comment on the retweet made his feelings clear. “This is one of the most ridiculous things I have ever read.”  Some tweeted that the blasphemy was compounded by the fact that the sausage roll was pork and Jesus was Jewish, making the Sausage Roll Jesus “unbelievably inappropriate.” As James Mather told the Metro, “I’m no prude, but equating Jesus, a Jew, to a sausage roll really is deeply offensive on all sorts of levels.” Perhaps the tweet by @Josh_Pearce on November 16 sums up well the  broad-based offense generated by the Sausage Roll Jesus: “A holy infant represented as a sausage roll?!! Really Greggs???–it truly makes my blood boil @boycottgreggs.”

The beleaguered bakery chain apologized. “We’re really sorry to have caused any offence, this was never our intention.” They didn’t, however, pull their 2017 advent calendars.

I confess, I find this controversy rather amusing. Perhaps unknown by Greggs bakery and its outraged twitter audience, the Sausage Roll Jesus is not the first time that a meat pastry has masqueraded as the babe in a manger.

In fourteenth-century England, a manuscript (housed in the University of Manchester) preserves a recipe for “Tarts of Flesh.” It is a recipe for mince pies. It explains how to grind pork, figs, cheese, honey, wine, spices (etc.) and bake in a pastry. Although not quite sausage rolls, mince pies as described in the 14th century manuscript were fairly common medieval fare. They consisted of finely shredded (minced) meat (pork, beef, mutton, or poultry) mixed with brandy-soaked fruit, fat, spices, eggs, and sometimes cheese. The filling was baked into an oval-shaped pastry called a “coffin” (which just referenced the shape without the negative connotations we associate with the word coffin today). Because they were more complicated and expensive to make, they were often used for celebrations and feast days (like Christmas).  The popular Christmas Encyclopedia, by retired physician William D. Crump, describes the elaborate nature of these pies. “Probably the largest mince pie of that era was described as measuring nine feet in diameter, weighing 165 pounds and containing two bushels of flour, 20 pounds of butter, four geese, two rabbits, four ducks, two woodcocks, six snipes, four partridges, two bovine tongues, two curlews, six pigeons, and seven blackbirds.” While I am uncertain about the accuracy of this reference (and, by the way, all the animals you don’t recognize are birds), mince pies were definitely popular throughout British history. Samuel Pepys describes in his diary for Christmas Eve 1663 how happy he was to find his wife at home making mince pies for the holiday. As early as October of this year, the Daily Mail reports that Brits had already spent over $5 million (American) on mince pies.

So what do the ever-popular mince pies have to do with Sausage Roll Jesus? Social historian Joan P. Alcock, an Honorary Fellow of London South Bank University and a Fellow of the Society of Antiquaries of London who has (among her many publications) published on food in Roman Britain and the ancient world, explains an interesting cooking development for medieval mince pies in Authenticity in the Kitchen. “Christian tradition,” she writes, “soon associated [the oval shape of mince pies] with that of the manager and a moulded pastry figure representing the figure of Jesus was put on the top of the pastry lid or was slipped inside.” In other words, just like the Greggs’ sausage roll inserted into the Nativity manger, medieval Christians baked meat pies that looked like mangers and put images of Jesus on top or even inside. Instead of Sausage Roll Jesus, it was Mince Pie Jesus.

Now, you might still find this offensive. Indeed, some scholars have argued (including Joan P. Alcock) that Oliver Cromwell’s Roundhead Parliament banned mince pies because of the idolatrous association with a “holy infant” (to return to Josh Pearce’s tweet). As Alcock has written, “This [the Mince Pie Jesus] allowed the Puritan governance of England in the 1650s to forbid the making of mince pies as idolatrous. At the Restoration in 1660s the making of mince pies resumed, but they were made in a round shape, and gradually the meat content was reduced.” Other scholars have questioned the historical reality of Puritans banning mince pies, suggesting instead that the ban was an 18th and 19th-century literary creation. For example, as the blog Mercurius Politicus reported, Samuel Peters wrote in a 1782 History of Connecticut,”No one shall read Common Prayer, keep Christmas or Saint days, make minced pies, dance, play cards, or plan on any instrument of music except the drum trumpet and jewsharp.” Peters assumed that the Puritan ban on Christmas expanded to other holiday activities. Of course, Cromwell and his gang really did try to ban Christmas celebrations (see my Anxious Bench post), and since mince pies were associated with Christmas celebrations, it is possible that they really were included in the ban. It is also possible that popular opinion (like Samuel Peters) simply assumed Puritans would ban mince pies because they tried to ban so much else. As Mary MacCarthy wrote in 1937, “Oliver Cromwell, spoiler of everything for the children, did his best to put an end to [Christmas] for ever. It was denounced as a heathen practice to eat a mince-pie in 1644.” Puritans, at least according to popular opinion, really were the Grinch Who Stole Christmas–including the meat pies.

I don’t know for sure if the Roundhead Parliament banned mince pies. What I do know for sure, however, is that when Greggs baked their Sausage Roll Jesus, the bakery–whether they knew it or not–was following a medieval English Christmas tradition. 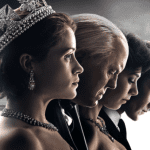 December 12, 2017
Queen Elizabeth, Billy Graham, and the Faith of The Crown
Next Post 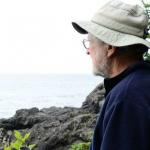 December 14, 2017 Can "Evangelicalism" Survive Trump?
Recent Comments
1 Comment | Leave a Comment
Browse Our Archives
get the latest from
Anxious Bench
Sign up for our newsletter
POPULAR AT PATHEOS Evangelical
1 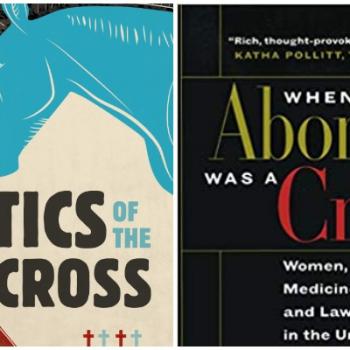 Evangelical
Abortion and The Politics of the Cross
Anxious Bench

Evangelical
Why Do White Christians Find It Easier to...
Anxious Bench
TRENDING AT PATHEOS Evangelical