In 1976, many evangelical supporters of Georgia Governor Jimmy Carter were disillusioned when the presidential candidate spoke rather openly about matters of the heart to Playboy:

I’ve looked on a lot of women with lust. I’ve committed adultery in my heart many times … Christ says, Don’t consider yourself better than someone else because one guy screws a whole bunch of women while the other guy is loyal to his wife. The guy who’s loyal to his wife ought not to be condescending or proud because of the relative degree of sinfulness.

Carter probably should have kept his lust to himself. According to Randall Balmer’s biography of the former presidents, Bailey Smith, Bob Jones Jr., and Jerry Falwell all pronounced themselves disillusioned with Carter. With President Gerald Ford in the pews, W.A. Criswell thoroughly enjoyed mocking Carter: 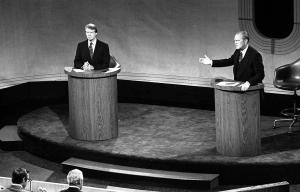 Criswell’s sermon made a rather effective campaign ad (which you can watch with this link). Carter complained that the Playboy interview caused him to drop fifteen points in the polls. Carter and Ford ended up roughly splitting the evangelical vote. As far as I know, it was Carter’s last interview with Playboy.

We’ve come a long way. At one time, conservative evangelical leaders questioned a candidate for talking to Playboy and for confessing to struggling with lust. Later, Falwell and other conservative evangelicals — much more reasonably than in the case of Jimmy Carter — insisted that Bill Clinton’s many sexual indiscretions and alleged crimes made him unfit to be president. While the media gives the misleading impression that nearly all evangelical leaders have given Donald Trump a free pass for his alleged misconduct, his core evangelical supporters have mostly ignored or forgiven the president. Oh the times we live in!

This is not to suggest that Republicans in any way have hypocrisy cornered. Democrats as well sing a different tune about Trump than they sang about Clinton. While the two sides of America’s evolving but interminable culture wars disagree about many aspects of sexuality, basic decency really should not be a partisan issue.

One of the things that most non-evangelical Americans simply cannot stand is evangelical preening on matters of sexuality. For a wide variety of reasons, evangelicals invite nothing but scorn if they criticize other people’s sexual behavior. Who enjoys being called a self-righteous puritan (one and the same thing, most people think)?

Ironically given the fallout from the Playboy interview, that sort of sanctimony was one thing that many Americans could not stand about Jimmy Carter, who often did not hesitate to preach morality. In 1977, Carter gave employees of the Department of Housing and Urban Development some advice:

we need a stable family life to make us better servants of the people. So those of you who are living in sin, I hope you’ll get married. Those of you who have left your spouses, go back home. And those of you who don’t remember your children’s names, get reaquainted.

These days, the phrase “living in sin” seems quaint. According to Balmer, “several of Carter’s close aides took his advice and solemnized their long-term relationships.” I imagine more found the advice insufferable, or rather sufferable but annoying.

Writing for the Washington Post, John Fea argues that in their defense of Trump, those he terms “court evangelicals” have made themselves complicit in the moral coarsening of American culture:

The bar for what is acceptable behavior in public life has been lowered significantly. Our kids encounter unhealthy images — on television, at the theater, at school, on their computers and phones — at a much earlier age than my generation encountered them.

While our country has made great strides in correcting many of our past sins, we are arguably exposed to more vulgar language, sex and violence than at any other time in American history.

… there was a time when opposing pornography was on the top of the Christian Right’s agenda. Today, many conservative evangelicals have cast their lot with a president who, perhaps more than any other politician in American history, has brought pornography into the political and cultural mainstream.

Fea is spot on. It was never the top issue, but a quick glance through Daniel Williams’s God’s Own Party provides plenty of reminders that pornography was a very important issue during the rise of the Religious Right. Evangelicals and other religious conservatives watched the coarsening of American culture unfold before their eyes, did not like it, and politicians who denounced it.

I am agnostic on the precise correlation between personal moral character and presidential effectiveness. I know that many past presidents engaged in adultery and other sorts of bad behavior. Nor am I suggesting that the nub of Trump’s moral failings consists in his choice of women.

Carter made a very reasonable point that the “relative degree of sinfulness” does not matter to God. It should matter to voters.

Was America Founded A Roman Catholic Country? (with...
The previous post included the observation that tracing the United States' roots...
view all Evangelical blogs
What Are Your Thoughts?leave a comment
Copyright 2008-2020, Patheos. All rights reserved.