“A Christian Country”: Debating America in 1939

Nowadays, we tend to associate the notion of the United States as a “Christian nation” with politically and theologically conservative evangelicals, like those analyzed in John Fea’s new book. But as I’ve continued my research on Charles Lindbergh, I’ve come across a very different kind of “Christian nation” argument — one made by a political and theological progressive who was horrified by the racialized language Lindbergh used to oppose American participation in World War II.

A bit of background: following the kidnapping and death of their firstborn child, and the spectacular trial that followed, Lindbergh and his wife, Anne, sought privacy by relocating to Europe. (First, a quiet estate in the English countryside, then a remote Breton island.) As tensions on the continent deepened, American diplomats asked Lindbergh to visit Germany, the Soviet Union, and other countries and evaluate their air power. He came away convinced that Germany was not only far stronger than France and Britain, but that the Western powers ought to avoid an internecine conflict and instead stand together with Hitler against the Soviet Union. “If it is necessary to choose,” he confided to this diary in August 1938, “I far prefer the systems of Germany and Italy to that of Russia.”

As it became less and less likely that Europe could avoid war, the Lindberghs returned to the United States. Deeply distrustful of Franklin D. Roosevelt, Charles Lindbergh decided to start speaking out against American intervention in Europe’s conflict. He delivered his first anti-war radio broadcast in September 1939, then that November published an article in Reader’s Digest. “Aviation,” he began, “seems almost a gift from heaven to those Western leaders who were already the leaders of their era… another barrier between the teeming millions of Asia and the Grecian inheritance of Europe — one of those priceless possessions which permits the White race to live at all in a pressing sea of Yellow, Black, and Brown.” But instead, the military potential of the airplane had placed Americans,

the heirs of European culture… on the verge of a disastrous war, a war within our family of nations, a war which will reduce the strength and destroy the treasures of the White race, a war which may even lead to the end of our civilization. And while we stand poised for battle, Oriental guns are turning westward, Asia presses towards us on the Russian border, all foreign races stir restlessly…

Our civilization depends on peace among Western nations, and therefore on united strength, for Peace is a virgin who dare not show her face without Strength, her father, for protection.

At least by Lindbergh’s account, reader response to his article was overwhelmingly positive. But one fiery critique that he saved came from a feminist writer named Katharine Hayden Salter. A graduate of Oberlin College, she gave up her own academic career after marrying John Thomas Salter, a political scientist who took a position at the University of Wisconsin and published a 1935 study of machine politics in cities like Philadelphia. But she continued to write, chiefly on the rights of women and the dangers of fascism.

“I cannot tell you what a shock of plain horror it has given me,” Salter wrote to Lindbergh about his article. “To my mind, bringing this Nazi racism, this insanity of racial conceit, this talk of spheres of influence, this combined ‘Western Wall of the great White Race’ into the United States, a Christian country (at least in the making) and a government based on the assumption that ‘all men are created equal’, is the supreme spiritual contamination. Racial contamination, whatever that may be, is as nothing compared to this brutal paganism.”

It’s her assumption that the United States was “a Christian country (at least in the making)” that particularly struck me. It wasn’t uncommon for right-wing isolationists to portray themselves as defending “Christian civilization” against the threat of Soviet atheism. (“While we preached Christian doctrines in our churches,” recalled a bitter Lindbergh during the war, “our government allied us with the godless cause of Communism.”) Salter believed that the “foundations of life in this country have been Christian, and Hebraic,” but came to a radically different conclusion than Lindbergh. It’s worth quoting at length:

This new world that you are envisaging and recommending to us is the antithesis of that Christian and Hebraic world. The Christian world does not have race barriers in it, and it has no master or slave peoples. It has no war, either. Needless to say, our world isn’t very Christian—but the North American continent comes nearer to being Christian perhaps than most parts of the world at the moment… We have disarmed, amongst ourselves, we have stopped looking at people as bits of races, foreign or non-foreign, and have dealt with each other as human beings…

The only place I know where real, amusing, kindly, civilized, “Christian” conversation seems still invariably possible is with the Jews themselves. And when the world you want to create on this hemisphere actually comes, as well it might, there will probably be millions of Christians who will gladly go into exile with the Jews—into catacombs, into caves, anywhere out of this new United States. And I think a great many of them will be people like myself, who are the descendants of the people who came early in the seventeenth century because they wanted to get away from the brutalities and intolerances of Europe, and who have fought for everything our Bill of Rights stands for from the day they set foot on New England shores to this, and who will go on fighting for them, out in the open, and, if persecution like that afoot in Europe comes here, then from some new catacombs. We shall certainly never, for one moment, be part of this silly, stupid, brutal, dull, inefficient, dishonest, and conceited world that will go on behind the West Wall of the White Race! We shall keep the Lord’s Prayer, and the Sermon on the Mount, and the parables, and the prophets and the psalms—and, I hope, the arts of the European nations, that will be increasingly precious as the barbarian hordes who know nothing of art and mind multiply.

Although she later fought a war of words against conservative Catholic groups, Salter’s opposition to “Nazi racism” clearly stemmed from her own faith. Ten months after her letter to Lindbergh, she wrote a short article for The Christian Century. While some isolationists fretted about what they called “the Jewish problem,”* Salter insisted that the real trouble came from “the Gentile problem”:

When I, a Gentile, look today at the Gentile world in general and at my own patch of it in particular, it seems obvious that the old heathen traits are on the rampage again—mob thinking, superstition, suspicion, and the eternal search for the scapegoat which is the Gentile’s most characteristics and ancient weakness. The Jew has pretty well got over blaming scapegoats. But the Gentile still, and repeatedly, breaks all of the Ten Commandments and most of the commandments of Jesus, and the horrible retributions that befall him because of his endless disobedience he blames on someone or something else.

Salter doesn’t mention Lindbergh by name, but as she neared her conclusion, it’s not hard to see her Christian Century article as a rebuff to his Reader’s Digest piece:

The most accurate barometer of the quality of Christianity in any place and time is the treatment given to minorities, chief among them the Jews. Whenever Christianity has been breeding the virtues of brotherly love, eagerness for knowledge, humility, passion for improvement, liberty and goodness among men, the Jews have been treated well by the Christians. But whenever Christianity has been only a name covering a state of violent, clannish, immoral barbarism, the Jews have been treated horribly. At this moment in the world’s history the fruits of the Gentiles by which they shall be known are poisonous.

*Lindbergh’s views on this topic are famously controversial. I won’t get deeply into the question here, but he frequently wrestled with what he too called “the Jewish problem” in his wartime journal. For example, after meeting in February 1941 with a professor who is “suspicious of everything — especially of the Jews,” Lindbergh wrote:

As far as anti-semitism is concerned, I think there is some reason for it in this country today. I have never classed myself as anti-semitic, and I think I will be on the side of moderation if an anti-semitic movement gains headway in this country. Yet I cannot help seeing that we have a Jewish and racial problem that is increasing rapidly in seriousness, and which must be faced fairly soon if it is to be met with moderation and intelligence. This continued Jewish immigration, together with the excessive Jewish influence in certain forms of American life, such as press, radio, motion pictures, finance, etc., is leading to real trouble. In numbers, the Jewish problem is not as serious as our negro problem; but the Jews make up in intellect and solidarity, and internationalism, for whatever they lack in actual numbers.

July 2, 2018
Vatican II as Experienced at the Local Level
Next Post 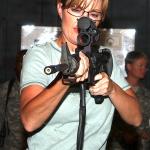 July 4, 2018 Unexpected Sites of Christian Pacifism: Pentecostal Edition
Recent Comments
2 Comments | Leave a Comment
"This is a very informative post. check this okbet ph"
thaomas Signs, Wonders, and the Making of ..."
"This is an interesting list of examples showing that humans throughout history are incredibly superstitious ..."
Jeff Bingham Signs, Wonders, and the Making of ..."
"Looking hard at the documented evidence for ancient societies, I find no examples suggesting anything ..."
philipjenkins Show Them No Mercy: The Bible ..."
"In your opinion has the USA or mainline denominations departed from persecuting Seventh Day Adventist? ..."
the old scribe Hopeful Apocalypse
Browse Our Archives
Related posts from Anxious Bench