Vatican II as Experienced at the Local Level

The Second Vatican Council (1962-65) is widely recognized as one of the most important religious events of the twentieth century—even if its reception has often proven polarizing among Catholics. Called into being by Pope John XXIII (r. 1958-63) and regarded as the twenty-first ecumenical council by the Catholic Church (the first was Nicaea in 325AD), the council ushered in major theological and liturgical modifications. Too often, however, the Council is narrated and analyzed only at the elite level, i.e., from the standpoint of the bishops and theologians who met in Rome while the Council was in session. Less attention has been paid to how it was experienced “on the ground” at the parish level. Recently, I asked my mother-in-law, a devout Catholic, how she experienced the Council. Born in 1935, she grew up in a family of Slovak immigrants who, like many others from Eastern Europe, settled around Pittsburgh to work in industry there. Her experience of parish life was shaped by that ethnic community. Below are excerpts from her responses to my questions:

What was church life and worship like prior to Vatican II?
All year long we had liturgical celebrations. Regular devotions like every Sunday evening and Benediction, plus those for holidays, like Christ the King, Holy Thursday, May Crowning of Mary, Corpus Christi, and Christmas angels processions.
Christmas was one of the highlights. Christmas Eve, all the girls in St. Mark’s school, from the 1st to the 8th grade, participated in a procession before Midnight Mass. They were dressed in various colored satin robes with wings attached to the shoulders. The nuns made them for us from the stiff material of which the collars of their habits were made. All the angels had new slippers in order quietly to process into the dark church, lit only with the Christmas tree lights in the sanctuary. All the angels would process to the front of the church, line up on the communion rail steps to sing various Slovak Christmas hymns, Just before 12:00 midnight, the main angel [an 8th grader] would come down the aisle carrying little Baby Jesus, with six small first-grade angels in gold-colored robes following. They would then put Baby Jesus in the manger while the entire church sang, Tiha Noc, Svata Noc (Silent Night, Holy Night). Christmas to us was a truly joyful time—more than just about Santa Claus!

After Midnight Mass at Christmas, my family would visit other dear friends’ homes, to extend greetings, rejoice together, have a toast and nut rolls, kielbasa or ham or paska bread—all this after Midnight Mass. Christmas was a joyful night to celebrate, not to sleep! We would get home about 3-4am, went to sleep for a few hours then returned to church (my Dad was on the choir). After lunch, the men in the choir participated in a Slovak tradition called Jaslichkare, symbolizing the shepherds bringing the news of Christ’s birth. About six to eight men would make short visits to shut-ins, wishing them a Merry Christmas (“Vesele Vianoce!”), sing a few Slovak Christmas hymns, have a little Christmas cheer offered by the household, then move on to the next stop. I was about sixteen always went along with my Dad to accompany the singers with my accordion … My Dad and I would return in the afternoon, then our family headed out to Youngstown, Ohio and Transfer, Pennsylvania to visit both grandparents and families to continue Christmas celebrations.

In addition to celebrations on feast days, the community cohesiveness, “loving God and neighbor,” was fostered with many vibrant organizations within each church. The very active ladies’ group called Christian Mothers, did much work at social gatherings, church suppers, Mardi Gras celebrations, coffee hours after Mass, etc. The young women helped too. Their group was called the Sodality. The youth had the CYO (Catholic Youth Organization); these boys and girls helped set up church picnics, did community service, play sports, etc. And, of course, the men had their group, the Holy Name Society. In addition to holding prayer meetings, they served as coaches, assistants to the priest, among other things. All ages had their specific groups during which many lasting friendships were made. And the annual fund-raiser church bazaar was always a big hit for the entire community.

Many of these liturgical celebrations gradually disappeared after Vatican II. They fell by the wayside. I do not necessarily blame Vatican II for the demise of some of these things, but it arguably played a role.

How did you experience Vatican II at the parish level?
At St. Mark’s [in Pittsburgh] where we went to church, the people generally disliked the changes since they knew all the Latin responses during Mass. Learning the English somehow distracted from the sanctity and reverence of the Mass. In addition to the short responses, like Dominus Vobiscum, Ite missa est, they sang the entire Gloria, Pater Noster, Agnus Dei, etc. in Latin with loving adoration. In the parochial St. Mark’s school that I attended up to the 8th grade, we all learned the Latin responses. The sermon and readings at Mass were always given in English with a few greetings given in Slovak, since there were still a good number of older people in church, who were especially unhappy with the vernacularization of the sacred liturgy. Instead of people observing silence in church before and after Mass, people were greeting each other and chattering without regard for the seriousness of the Mass. Yes, they had a lot of enthusiasm to share with each other after Mass, outside of the church before racing to their cars to leave. The church seemed to lose its “house of prayer” designation .

The general sacredness of the liturgy seemed more secularized, since the requirements for the reception of Holy Communion were relaxed. People could receive Communion at every Mass without going to confession, provided that they have not committed any mortal sins. People were able to receive the host in their hands, standing in rows to do so, NOT having to kneel at the communion rail in church [as in the past]. The reverence was diminished with the frequency and routine.

What other changes did you note came after Vatican II?
After Vatican II, a more positive attitude was fostered with respect other religions, other than the triumphalism which many Catholics felt, a superiority with heaven reserved only for them. Religious liberty was announced–and the old solid faithful Catholic Slovaks had to share salvation with others. Also, the attempt to foster a greater interest in Bible study somehow never caught hold in my section of Pittsburgh. Of course, we had readings at every Mass, from the Old and New Testament, and in St. Mark’s Elementary and Mt. Assisi Academy, where I attended high school—and discussions were held about various gospel stories and sermon topics. However, the entire attitude of serious Bible study was not achieved, as the council of Vatican II had hoped. Nowadays, there are more discussion groups and Bible study in contemporary parishes to which I belong . . .

These are some of my thoughts and observations as I lived and witnessed them.

For those who would like to learn more about Vatican II, I recommend Matthew Levering’s An Introduction to Vatican II as an Ongoing Theological Event and John O’Malley’s What Happened at Vatican II?

June 29, 2018
Faith, Fertility, and the Fate of American Religion
Next Post 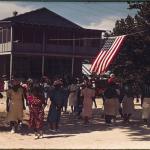