Faith, Fertility, and the Fate of American Religion

The United States just passed a critical statistical landmark, one that I think – I fear – has immense implications for the nation’s religious life. If I am right, and we are dealing with early days, we might seriously be looking at the opening stages of a large scale process of secularization. After being reported and speculated about for decades, that secularization might finally be happening. As I will argue, the term “secularization” over-simplifies the process, but let that stand presently.

The landmark in question concerns the fertility rate, the average number of children that a woman bears in her life.  (Scholars commonly speak of the total fertility rate, TFR). If that figure is around 2.1 children per woman, then the population will remain broadly stable, and that level is termed “replacement rate.” If the rate is much higher than that, say 5 or 6 per woman, then we will see a rapidly expanding population with many young people and young adults, with all the restlessness and turbulence that suggests. A fertility rate below 2.1 results in contracting population and an aging society. (Death rates are also significant, but less so for present purposes).

Rarely remarked even by expert observers, there is an inverse relationship between the fertility rates of a community and that society’s degree of religious fervor and commitment. High fertility societies, like most of contemporary Africa, tend to be fervent and devout. Conversely, the lower the fertility rate, and the smaller the family size, the greater the tendency to detach from organized or institutional religion. That shift from high to low commonly takes place in a short time, a generation or so. Fertility rates thus supply an effective gauge of trends towards secularization. What follows is a bare sketch, but I will deal with it in much greater detail in a book that I am currently working on – especially on issues of causation and correlation.

The classic example of demographic/religious change is modern Europe. Not coincidentally, the Europe that has become so secular since the 1960s has also, in these same years, pioneered an epochal demographic revolution of historically low fertility rates. Those rates are at their lowest in such countries as Spain and Italy, where they stand today around 1.3 or 1.4, and they have dipped well below that. Some German regions show unprecedented historic lows of 0.8. The fertility rates of nations like France and Great Britain are higher, approaching replacement, but that is because of the high fertility of recent immigrants. The rates of old-stock white populations remain universally low.

Between 1960 and 2000, much of Europe passed from a high fertility society in which religious faith and practice were both deeply ingrained to becoming deeply secularized. Any number of measures illustrate that, but regular church attendance and priestly vocations are both good guides. Protestants were ahead of Catholics in this process, but both shared similar trajectories. Witness the collapse of both faiths in the Netherlands, which even in the 1950s was a very religious  society.

That demographic change has complex consequences for religious change, although there is no simple chain of causation. Nor is it easy to distinguish cause from effect. Declining fertility accompanies women’s emancipation and full-scale entry into the workforce, and commonly results from a decline in traditional religious-based concepts of gender roles. In turn, smaller families reduce their ties to organized religious institutions, as there are simply fewer children to put through religious school and First Communion classes. As religious ties diminish, ordinary lay people increasingly define their values in individualistic and secular terms, and are more willing to oppose churches on social and political issues of gender and morality. Even in once solidly Catholic countries, we see the advance of contraception, abortion, and same sex marriage, and a precipitous decline in church attendance and participation.

If demographics does not offer a complete account of European secularization over the past half-century, then it is a component of the story that we neglect at our peril. The correlation between faith and fertility is genuine and significant.

For over a decade, I have repeatedly argued that the religious picture of the United States is fundamentally different from that of Europe, and that the country’s high fertility rate is an essential sign of that difference. For many years, the US remained the only one among the world’s advanced industrial and post-industrial nations to maintain a fertility rate above replacement. The US rate in 1960 was 3.6. It then fell steadily, and dipped sharply for a few years in the mid-1970s, and briefly looked quite European. But it soon rebounded, and it ran around 2.1 from 1989 through 2009. The US went through all those social changes – particularly about women in the workplace – and yet remained very religious in orientation, and high in fertility.

The US fertility rate is safe, I thought, so US religion is safe. Or such was the argument, in very simplified terms.

And then the US rate began to fall, to Europeanize, dipping below 2 in 2010. At first, I suggested this was a statistical blip, but it has never since returned above 2.0, and last month, the 2016 rate was announced: just 1.74, a very European rate. We can debate these figures a bit, and some different interpretations are possible. But the trend line is unmistakable, and it is pointing steeply downward. What we appear to be seeing is what secularization theorists have long argued. The US is not essentially different from Europe, in religion or anything else. It is following the same path, albeit with a delay of some decades. The US is a laggard, not an exception.

Of course, I am not taking one lone indicator as the key to a whole religious story, but it is an important one.

The always readable Jana Riess has a column over at RNS on related themes, on just “Why Millennials Are Really Leaving Religion (It’s Not Just Politics, Folks).” She mentions fertility issues, and stresses the closely related issue of delayed marriage, the larger number of single people, and the postponement of family commitments and responsibilities. I echo every word of that.

As we see even in Europe, secularization does not simply mean the decline or death of religion or religious belief. However hostile they might be to hierarchies, however unwilling to attend weekly services, a great many Europeans continue to show a potent interest in religious and spiritual affairs. This is demonstrated especially by the vast and even growing popularity of pilgrimage across the continent, commonly to very traditional-seeming shrines associated with the Virgin Mary, and offering healing through faith. Supposedly secular Europe actually demonstrates a startling paradox of piety. But what we do undoubtedly see is the sharp decline of institutionalized religious practice, of traditional ideas of institutional and hierarchical religion, expressed for instance in respect for clerical power and regular religious practice.

Whenever we consider these themes, it’s always rewarding to look at Philip Larkin’s wonderful poem Church Going, about which I did a column at Aleteia a couple of years back. Here a poet, not a social scientist, offers perhaps the best survey we are likely to get of what vanishes and what remains when religions fade. So yes, says Larkin, let’s imagine a worst case scenario. Churches and creeds may fade, even die, but still, holy places remain, and they powerfully focus our desires and hopes, our need for rootedness and continuity:

A serious house on serious earth it is

In whose blent air all our compulsions meet

Are recognized and robed as destinies.

And that much never can be obsolete

Since someone will forever be surprising

A hunger in himself to be more serious

And gravitating with it to this ground

Which he once heard was proper to grow wise in

If only that so many dead lie round.

These are trends and prospects that US churches and religious institutions should consider carefully. They might start paying attention to how European churches are coping, or more commonly, failing to cope.

Something to think about this coming Fourth of July, the nation’s birthday. 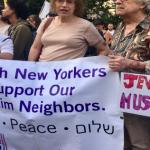