Blok and The Twelve

This column grows out of my recent series on the city of Ravenna, and its amazing artworks. I mentioned there the poem Ravenna by Aleksandr Blok (1880-1921), one of Russia’s greatest poets. Blok is best known though for another work, and one that really defies categorization. Just because a work addresses Christian themes does not make it Christian literature. And yet …

I have written a lot about the First World War, and especially the end of that war in 1918, the centennial that we will be commemorating in the coming weeks. In 1918, Russia was entering a savage phase of its history, with the Revolution in full swing, and the opening stages if a civil war that would kill millions. In early 1918, Blok published a long poem that succeeded briefly in uniting all shades of opinion: it provoked and infuriated basically everybody.

In The Twelve, Blok described a thuggish group of Red Guards marching through the streets of Petrograd in a blizzard. Red Guards were the ultra-revolutionary militants and vigilantes who provided the muscle for the movement, comparable to the later storm troopers. This particular band is drunk, boorish, and destructive, and they commit acts of vandalism and violence against anything they think might be associated with the bourgeois order.

On this occasion, their mission is anything but holy, or even too serious politically. One of their number, Vanka, has run off with the prostitute Katya, who should properly belong to their leader Petya, Peter. They track down the horse-drawn sleigh in which the couple are joy-riding, and their bullets claim the life of Katya, while Vanka escapes. Petya is downcast, because he loved Katya in his way. But his colleagues reassure him that they must concentrate on the higher goals of the Revolution, rather than worrying about personal squabbles. On they march, dimly aware of a shadowy figure ahead of them, who is carrying a red banner:

… So they march with sovereign tread…

Behind them limps the hungry dog,

and wrapped in wild snow at their head

soft-footed where the blizzard swirls,

crowned with a crown of snowflake pearls,

a flowery diadem of frost,

ahead of them goes Jesus Christ.

So are we to see the Twelve Red Guards as the new apostles, led by a new Peter? Was Christ leading the Guards, or fleeing from them?

As a poem, in its use of language and literary devices, The Twelve is magnificent and highly innovative, and it is commonly regarded as one of the great productions of Russia’s twentieth century. But the themes ….  what to make of them? Was Blok mocking the revolutionaries, depicting them as thugs and criminals? Bolshevik authorities were furious at any work that invoked Christ, and revolutionary critics excoriated Blok. Leon Trotsky asked in exasperation, “What was the point in climbing our mountain in order to erect a medieval shrine on the top?”

Or, was the poet expressing active praise for the revolution, and claiming it was manifesting an authentic kind of apocalyptic Christianity free from the institutional structures of the churches? Were Peter and his Guards authentically the new apostles? Christians and anti-revolutionaries were appalled by this suggestion, especially as the Bolsheviks launched perhaps the worst and bloodiest religious persecution in the whole of history.

Either way, Blok lost a lot of friends over this affair. He himself was dead by 1921, at age forty, and he offered few further explanations. Nor did he face the inevitable persecution that greeted most Modernists in the Stalinist years.

I lean strongly to the view that the appearance of Christ here is not ironic or blasphemous, and rather that he was seeing the revolution as a kind of apocalyptic, spiritual upsurge. Supporting this idea is Blok’s controversial poem The Scythians, written within days of The Twelve.  That poem urged Europe to accept the messianic role of the new revolutionary Bolshevik Russia, as the best way of preserving the white Aryan race. Yes, I know, Blok’s politics were complicated. (The racial fears owe much to the influence of mystic and philosopher Vladimir Solovyov, whom I’ll discuss in a future post).

Another great writer of the era was Russian Symbolist Andrei Bely, who is often bracketed with Blok, and the two shared many of the same influences, including Solovyov. In 1913, Bely published the messianic/apocalyptic novel Petersburg, which is often compared to Joyce’s Ulysses. The novel depicts prewar Saint Petersburg as a society on the verge of explosions, literal and metaphorical. It is a city under the eye of angels, where the devil walks the streets, and whose people await conquest and obliteration by an Asiatic horde. The statue of a horseman is a pervasive symbol, suggesting one of the four horsemen of Revelation. Only in whispers can Bely’s characters discuss the real issue at hand: “the Second Coming of Christ.” Petersburg is already a city living at the end of the world. Bely explicitly viewed the Bolshevik Revolution as an apocalyptic event, manifesting a mystical rebirth of Christianity.

This interpretation fits very well into the mood of 1918 and the immediate post-war years, when messianic and apocalyptic ideas were running like wildfire around the world, often in notionally secularized form. (I talk about this at length in my 2014 book The Great and Holy War).

Christians saw the End Times inaugurated with the Christian capture of Jerusalem from the Turks in 1917, and the manifestation of the apocalyptic plagues, not least the influenza epidemic of 1918. Others saw secular millenarian visions of their own, that took material form in Fascism, Communism, and Nazism. The rhetoric of blood and redemption, salvation and the End Times, became very widespread, as did visions of angels and Judgment. On whatever grounds, some very conservative thinkers and writers indeed were using language that to us seems wildly apocalyptic. But unlike them, we are not living amidst the collapse of all worldly structures, the dissolution of foundations. Blok was.

You may recall what W. B. Yeats wrote in his poem The Second Coming, published in 1919, in its vision of an impending dark messiah:

And what rough beast, its hour come round at last,

Slouches towards Bethlehem to be born?

Bringing all these themes back together, Yeats was another author I mentioned who was stunned by his experience of visiting Ravenna.

So is The Twelve a Christian poem? I really don’t know what to say. But it does deserve its place in any collection of Christian apocalyptic. 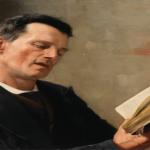