The Tender, Gracious God of My Favorite Hymn Writer

On October 3, 1832, my favorite hymn writer in church history was born in rural Sweden. Named in honor of a brother (Carl) who had died as an infant, Carolina Sandell was the fifth child of a Lutheran pastor, Jonas, and his wife, Frederica. A poet from a young age, Lina began to keep a spiritual journal at age 12, and shared her Pietist father’s love for spiritual writers like Johann Arndt, Philipp Jakob Spener, and Christian Scriver. Around age 17 or 18, she wrote a hymn whose first verse Ernst W. Olson would later translate into English as these familiar words:

Children of the heav’nly Father,
safely in His bosom gather;
nestling bird nor star in heaven
such a refuge e’er was given.

Championed by everyone from internationally famous singer Jenny Lind to the king of Sweden himself, Lina Sandell ultimately wrote something like 2,000 hymns before her death in 1903.

But only two of her works have survived the translation to English to achieve general popularity. Set to a simple, endearing tune by Oscar Ahnfelt, “Children of the Heavenly Father” first moved into the American Protestant mainstream over a century after it was first published, when it featured in Billy Graham’s 1955 revivals in Scandinavia and was then published by Graham’s music director, Cliff Barrows. It now appears in Brethren, Moravian, Presbyterian, Seventh-day Adventist, Southern Baptist, United Methodist, and many other hymnals, as does Sandell’s “Day by Day, and with Each Passing Moment” — written in 1865 (again, with an Ahnfelt tune) and then translated into English by A.L. Skoog, the choir director of what’s now First Covenant Church in Minneapolis, Minnesota. (An alternative translation by Lutheran pastor Ernest Edwin Ryden renders the first line, “Day by day, thy mercies, Lord, attend me.”)

Methodists still sing “Thy Holy Wings, Dear Savior.” But otherwise, Lina Sandell’s prodigious output is unknown in English apart from the traditions most shaped by Swedish immigration. And in all but one of those denominations, only a handful of Sandell hymns survive. 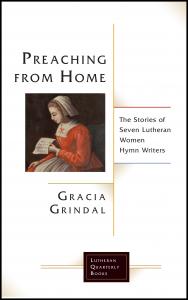 According to the Lutheran scholar Gracia Grindal (whose collection, Preaching from Home: The Stories of Seven Lutheran Women Hymn Writers, is my main source for this post), Sandell was responsible for 117 of the 500 hymns collected in Hemlandssånger (1892), the most popular songbook of Swedish-American Lutherans. But when the Augustana synod put out an English hymnal seven years later, only two Sandell compositions remained: “Jesus, Thou My Heart’s Desire” and “Jerusalem, Jerusalem, Thou City Ever Blest.” Olson’s translation of “Children of the Heavenly Father” began to appear in Augustana hymnals in the 1920s and 1930s, and was the only Sandell hymn to be found in either the 1958 Service Book and Hymnal of the Lutheran Church in America (which Augustana joined in 1962) or the 1978 Lutheran Book of Worship (published jointly by the LCA and American Lutheran Church with their brethren in the Missouri Synod). The LCA and ALC merged to form the Evangelical Lutheran Church in America, whose 2006 “cranberry” hymnal includes “Children” and three other Sandell works: “Day by Day” (which had largely been relegated to songbooks for children and youth in 20th century Lutheranism), and Grindal’s translations of “Thy Holy Wings” and “The Numberless Gifts of God’s Mercies.”

Sandell’s work experienced a similar fate among Swedish Baptists in America. In Nya Psalmisten (1903), she accounts for more than 10% of the 364 hymns, her 37 being more than those from Fanny Crosby (17), Isaac Watts (10), and Charles Wesley (4) put together. In 1945 the Swedish Baptist General Conference dropped the ethnic adjective from its name. Five years later the BGC published an English hymnal that included only three of Sandell’s once-beloved hymns: “Children”; “Day by Day”; and “Thou Tender, Gracious Father.” A denomination that was trying to outgrow its immigrant roots and forge ties with postwar neo-evangelicalism instead drew heavily on the work of Crosby (16) and two of Homer Rodeheaver’s most popular writers: A.H. Ackley (“He Lives”) and Charles H. Gabriel (13 apiece).

“The true repository of Sandell in English,” concludes Grindal, is the current hymnal of my home denomination, the Evangelical Covenant Church. Initially, Sandell’s work followed the same trajectory in Covenant hymnals as in those of the Swedish Lutherans and Baptists. She accounted for 78 hymns in Sionsharpan (1890) and sixteen (out of 264) in De Ungas Sångbok (1914 — versus 9 from Crosby). Then the first Covenant hymnal in English (the “brown” hymnal of 1931) included only four of those texts.

But the same year that its Baptist cousins published a hymnal with only three Sandell hymns, the Covenant Church put out a new, green-covered hymnal with eleven. One of them disappeared in coming years (“Strait [sic] is the Gate to All who Come”), but remarkably, the “red” hymnal of 1973 had more Sandell hymns: thirteen in total, including three new translations by Covenant scholar Karl Olsson. Of those Sandell-Olsson hymns, only the lovely “In the Springtime Fair and Mortal” survived the transition to the “blue” hymnal in 1996, but so did nine other works by Sandell.

As much as anything, I think the living legacy of Lina Sandell hymns in Covenant hymnals illustrates how that denomination has sought to preserve an evangelical heritage that is much older than neo-evangelicalism, a heritage that has been shaped primarily by Pietism. (Last year Covenant pastor Mark Pattie quoted Sandell’s “Now Before You, Lord, We Gather” in our Pietist Option book.) Though she never left the state Lutheran church, Sandell played significant roles in Sweden’s pietistic Evangelical Homeland Foundation. Her scripture-soaked hymns speak a simple theological language familiar to evangelicals, but with a tenderness, intimacy, and irenic spirit that isn’t always present in the works of evangelical counterparts whose works are more popular in English.

“I need to receive grace for grace,” Sandell wrote in 1859, a year after her father drowned while taking a boat trip with her. “Give me what you see I need, give me a greater faith and love.” After seeing her first opera, in Copenhagen, she wrote of “an inner need to thank God for the grace to live in a kingdom of reality and truth.” Small wonder that the great Swedish revival leader C.O. Rosenius insisted that “No one can sing of the free gift of grace like Lina Sandell.” Nor that she recorded these words from him at his deathbed: “We must never abandon the belief that sinners must live each day by grace, until it has been decided in heaven that there will be nothing else on earth.”

But salvation was never simply a matter of legal justification for Sandell, Rosenius, and other Swedish Pietists. Grace led to living faith, and it came through the personal experience of a loving God who was much more to them than a merciful Judge. Sandell’s relationship with God is one of tender intimacy. “She discovered,” wrote J. Irving Erickson in Twice-Born Hymns, “that she was unhappy so long as she felt that she was not resting in him.” (My late friend Glen Wiberg, editor of the 1996 Covenant hymnal, credited Erickson with seeing it “as the Covenant’s role to preserve the music of our Scandinavian heritage.”)

In fact, some of her work that never did cross the Atlantic spoke of the closeness of this relationship in ways that would have taken most Anglo-American evangelicals aback. Like other Scandinavian Pietist women, Sandell was comfortable with the language of bride mysticism. The adolescent who described her confirmation as being a celebration of “my wedding day with him whom my soul holds dear” later wrote hymns to Jesus the bridegroom.

Still more controversially, she inherited the Radical Pietist and Moravian interest in the divine feminine. The first draft of “Thy Holy Wings” asked God to spread “warm mother’s wings,” and a hymn inspired by the martyrdom of Swedish missionaries in Ethiopia implored God to “tenderly hover” over Christ’s witnesses on Earth, “Embracing their cares like a mother.”

Male editors soon removed such allusions from Sandell’s hymns. For example, what became “Thou Tender, Gracious Father” began as a meditation on Jesus longing to gather together the people of rebellious Jerusalem “as a hen gathers her brood under her wings” (Matt 23:37). But Grindal defends Sandell’s meditations on God as mother: “She was not trying to find a new image for God, but she is expressing herself in what she feels to be deeply biblical truths, consistent with the sentimental and romantic view of motherhood in her time.” (Incidentally, Sandell’s parents both passed away before her 30th birthday, and her only child with merchant Oscar Berg died at birth.)

In her descriptions of God that are still with us, Sandell reminds us that He has nothing in common with the toxic masculinity of Trump-era America. Sandell sings of a heavenly Father who gathers us to his bosom and spreads his wings gently over us. She prays to a Brother for whose peace we long in stillness.

In the end, Lina Sandell asks her God not for victory or power, but for “rest and quiet peace in thee” — that her “tender, gracious father” would but come “in quiet dreams” to provide “assurance of his grace.”

For an earlier reflection of mine on “Children of the Heavenly Father,” see this 2015 post at The Pietist Schoolman.

October 3, 2018 My First Sermon: The Faith of a Woman
Recent Comments
1 Comment | Leave a Comment
Browse Our Archives
Related posts from Anxious Bench