The Legacy of Rachel Held Evans

With many others, we join in grieving the loss of Rachel Held Evans, who died this morning, a month shy of her 38th birthday. A “forceful and winsome public voice for progressive evangelicalism, first as a blogger and later as an author and sought-after speaker” (as Ruth Graham put it), RHE had been in a medically induced coma since mid-April, when she began to experience constant seizures after an allergic reaction to antibiotics. She leaves behind two young children and her husband Dan.

There will be much to be said about Rachel Held Evans’ legacy. Tonight I just wanted to invite Kristin and Beth to share a bit of what RHE meant to them, then I’ll add some brief thoughts at the end of the post.

As a Christian woman, I—like so many others today—am struck by an enormous sense of personal loss. My relationship to Rachel Held Evans is not that of a close friend—we only interacted on a couple of occasions—but I did consider her a kindred spirit.

Unlike many women I know, my path toward Christian feminism was not guided by Rachel Held Evans. As a historian of religion, it was the writings of Rachel’s precursors—women like Katharine Bushnell and Madeline Southard—who introduced me to alternatives to the patriarchal Christianity I had inherited. But those writings set me on a path parallel to the one Rachel was fearlessly hewing. 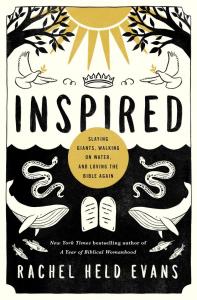 As an academic—particularly as an academic working to finish a Ph.D., land my first job, publish my first book (on Christian feminism), all while starting a family, I at times found myself plagued with a sense of guilt that I should be doing more to bring my research to the public—especially to Christian women. But then I’d remind myself that Rachel Held Evans was already doing that hard work, more capably and winsomely than I ever could, and with that comfort I would head back to the archives.

Now, as a public scholar myself, I have a deeper appreciation for what that work cost her. I know she loved writing and teaching and she wasn’t afraid of conflict, yet I can only imagine how exhausting the constant pushback must have been. Not too long ago, the Washington Post called her the “most polarizing woman in evangelicalism.” Perhaps she was polarizing, but perhaps it was American Christianity that was already polarized, and Rachel simply inhabited, thoughtfully and faithfully, the messy middle. I think that’s where many of us find ourselves, too. Rachel spoke to us, and often for us. She created space for many of us to claim as our own.

As a scholar of American Christianity, I find myself reflecting today on Rachel’s legacy. She didn’t hold an endowed chair at a prestigious seminary, and she wasn’t the charismatic pastor of an influential megachurch. Yet in many ways she was located near the center of American Christianity. (Especially when we consider that the church is and has long been predominantly female, we may need to recalibrate our sense of where the center might be, and who the most influential leaders actually are). Through her blog and her books, Rachel reached hundreds of thousands (perhaps millions) of Christians—especially Christian women. When the history of early twentieth-first-century American Christianity is written—certainly the history of American evangelicalism—she deserves a prominent place.

Rachel Held Evans will be greatly missed, and I want to extend my deepest sympathies to her husband and children, and express my immense gratitude for the work she did so long (not long enough) and so well. (Kristin Du Mez)

It was late in the Fall semester of 2012. The sun still shone warm on my upstairs work desk. I remember it glinting on the yellow cover of the new book I had just received by an author whose name was only vaguely familiar. It was A Year of Biblical Womanhood, and by the time I finished it the next day, my world had changed. 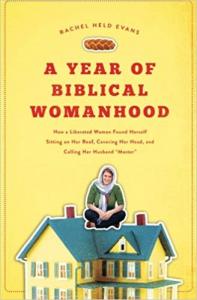 Rachel Held Evans, in her witty yet fierce way, had cut straight through the fuzziness in my head. It had only been a few weeks since I had confessed to my husband that I could no longer support complementarian theology. I remember him standing there, his strong hands clutching the kitchen counter. We had both grown up in Southern Baptist churches; we had both been taught, for as long as we could remember, that men led and women followed. “So you don’t believe the Bible teaches men should be the spiritual leaders?” “No,” I said simply.

But it wasn’t until I read Rachel Held Evans that things clicked. Biblical womanhood is and had always been culturally constructed. That truth shines like a beacon for me. From that day, I followed the work of Rachel Held Evans. I didn’t always agree with her, but I watched as her words gave women strength and hope. I watched her faith evolve yet still stay strong. I watched her courage grow and her words change the lives of Christian men and women. When I think about the starting point of my activism for women in the church, Rachel Held Evans is at my beginning.

I never met her, but for me—like thousands of other women—she will always be part of my story. Thank you, God, for her life and for her work. (Beth Allison Barr)

If her own husband feels like he’s “telling someone else’s story,” then I’m not at all confident I have anything meaningful to say about Rachel Held Evans. I never met her; we didn’t even interact via Twitter. I’m just one of the millions of people who have read her writing, and one of the thousands of Christian bloggers and writers who have learned from her example.

But long before I ever dared to blog, RHE was showing me how it was done, demonstrating that not just trained theologians but “regular people can talk about God too, and perhaps even prophesy.” Whether we agreed (often) or disagreed (sometimes), I always appreciated RHE’s willingness to “think in public” about God, God’s word, and God’s love for all people. And I admired the courage and conviction it took to do all of this as a woman who had been told a thousand times in a thousand ways to keep silent in church. 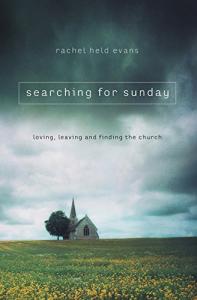 Long before I dared attempt a book about Christianity for a general audience, RHE wrote about topics like biblical womanhood (still the only book I’ve ever given my mom) and the church. A post-evangelical member of the Episcopal Church, RHE organized the latter book, Searching for Sunday, around reflections on the seven sacraments. Since I planned to do the same last month when I gave a talk on the liberal arts, I started to reread Searching for Sunday in search of inspiration.

As it happened, I came to RHE’s meditations on the anointing of the sick not long before word broke about her illness. I found myself underlining one sentence:

We are called to enter into one another’s pain, anoint it as holy, and stick around no matter the outcome.

No matter the outcome….

Later in that section of the book, RHE told the story of the Cove, an evangelical congregation in Vancouver that lost its denominational funding over its refusal to expel a lesbian couple. The Cove held one final service, prayed that God would use their church well, took a collection for their pastor’s family, and disbanded. “It was a death,” she concluded, “but it was a good death.”

Given what her family and friends are going through, I can’t possibly call RHE’s death “a good death.” But as I’ve watched the remarkable torrent of love, grief, and gratitude intermingling so beautifully — even in a place as ugly as Twitter — I’ve wondered if I was seeing hints of what RHE actually meant to describe in the story of the Cove:

As the shape of Christianity changes and our churches adapt to a new world, we have a choice: we can drive our hearses around bemoaning every augur of death, or we can trust that the same God who raised Jesus from the dead is busy making something new. As long as Christians are breaking the bread and pouring the wine, as long as we are healing the sick and baptizing sinners, as long as we are preaching the Word and paying attention, the church lives, and Jesus said even the gates of hell cannot prevail against it. We might as well trust him, since he knows a thing or two about the way out of the grave.

Amen. So I hope that we continue to enter into each other’s pain and see God making things new. I hope that everyone mourning RHE today find themselves sticking around the Church that she criticized, questioned, served, and loved.

Evangelical, ex-vangelical, Episcopalian, and everyone else: I hope they’re willing to keep talking about God in Kristin’s “messy middle,” where I pray that we learn to agree and disagree with each other with anything like RHE’s honesty and winsomeness.

Peace be to her memory. (Chris Gehrz)