Several years ago, I wrote a post about the way that early modern Christians understood pelicans as a symbol of God’s mercy. I’m reposting my original piece below, drawing from the Anxious Bench archives.

I’ve been reflecting on the piece recently. Two weeks ago, I wrote about the symbol of the rooster in early Christianity. And I noticed that my fellow blogger Chris Gehrz remembered my post when watching a documentary this past spring. Perhaps a reminder that Christians sometimes try too hard to see the gospel in nature!

Seriously, the opening shot of a menacing pelican silhouette is the most terrifying thing I’ve seen in a year. https://t.co/sZH1o4qhSv I dread my dreams.

While at the cathedral last week, I noticed something that will no doubt be common knowledge to students of medieval Christianity but was new to me. In two paintings — on the central mural behind the altar and in one of the stations of the cross — is an image of a pelican with her young chicks. A pamphlet informs that the image symbolizes “Christ’s sacrifice based on a belief in the Middle Ages that the pelican feeds its young with its own blood.” 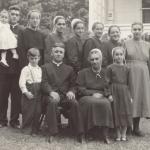 August 16, 2019 Witchcraft … By Any Other Name
Recent Comments
0 | Leave a Comment
Browse Our Archives
get the latest from
Anxious Bench
Sign up for our newsletter
POPULAR AT PATHEOS Evangelical
1