God in the Rainforest

Kathryn T. Long’s God in the Rainforest: A Tale of Martyrdom and Redemption in Amazonian Ecuador could have been a best-seller. Following well-worn tropes and predecessors, she could have lionized the evangelical missionaries who risked their lives to contact the Waorani, spent their lives with them, translated the New Testament, and protected them from each other and from outsiders who wanted their land. Or she could have condemned missionaries who collaborated with governments and oil companies to intrude upon the Waorani, subjugate them, and take their land, all the while trying and failing to foist an alien religious culture upon them. Readers – different groups of readers – like both of those stories. Various authors have written such books. They have sold well. 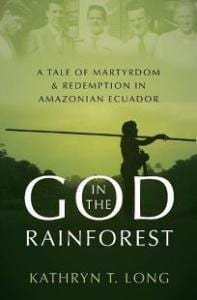 Thank goodness Long rejected both of these morality plays. Instead, she has diligently researched and written a judicious, careful, and painfully human examination of what has transpired in and around Waorani lands since 1950. The result is a model of academic history and Christian scholarship.

Many American evangelicals remain familiar with the story of the five young missionaries who contacted a Waorani community and were speared by them in January 1956.  Life magazine published a lavish report that turned the men into martyrs and their widows – most notably Elisabeth Eliot and Rachel Saint – into evangelical heroes. A host of books, including Eliot’s Through Gates of Splendor, further popularized the story, as did the 2006 film End of the Spear. For years, the Summer Institute of Linguistics (SIL) and the Wycliffe Bible Translators made the martyrdoms and subsequent Waorani a center of their fundraising efforts. A generation of American evangelicals grew up with this story.

As the decades passed, non-evangelical anthropologists and environmentalists told other stories about SIL and the Waorani. Writers such as the journalist Joe Kane, the anthropologist Laura Rival, and the lawyer Judith Kimerling skewered SIL, the Ecuador government, and oil companies. They asked why the missionaries had worked so hard to relocate Waorani groups to one particular location. Had that not paved the way for the Ecuador government to take Waorani land and for oil companies to despoil it? Why had the missionaries sought to eradicate elements of Waorani culture, such as chanting? Why had the missionaries made Waorani communities dependent on them? Other critics made even more outlandish accusations, such as that American evangelicals had clandestinely orchestrated a campaign to sterilize indigenous people.

Long spent a long time researching and writing God in the Rainforest. She obtained access to remarkable caches of papers, some in archives and some held privately by principal parties to the story and their family members. These sources, such as the papers of anthropologist Jim Yost, enable her to proceed with a remarkable level of detail. Long went to Ecuador herself. “While friendly and welcoming,” she observes wryly, “the Waorani who hosted us were not particularly impressed by a visit from a gringa historian.” Long also interviewed two dozen participants in the story, including Dayomæ, Jim Yost, Steve Saint, and Catherine Peeke.

The fruits of this patient and thorough research are astounding. God in the Rainforest does not linger over the 1956 mission deaths. Long tells the story well, but she moves onto less well-traveled roads. She carefully examines the fraught relationship between Rachel Saint and Elisabeth Eliot (and between Saint and nearly everyone). While the SIL missionaries remain the centerpiece of the story, Dayomæ takes center stage at times as well. Dayomæ’s relationship with Saint and other missionaries made her a “cultural broker,” enabled the missionaries’ entry into Waorani society, and assumed considerable privilege and authority.

Most surprising to me is Long’s repeated attention to the role of the Catholic Church and Catholic missionaries in this story. At times, SIL and Catholic workers competed for access to the Waorani, to the point that Rachel Saint once whisked away a young Waorani woman named Oncaye from a hospital. Long also narrates the life and death of Bishop Alejandro Labaca Ugarte, who along with Sister Inés Arango was speared to death by the Tagædi Waorani community in 1987. Labaca was just as headstrong and faithful as the five American evangelicals who met a similar end back in 1956. Labaca and Arango, however, remain unfamiliar names to most American readers.

Long does not rush her story. She introduces the many men and women who come and go over the decades. She sifts through both the praise lavished on the missionaries and the criticisms leveled against them. All along the way, she recognizes the messiness and contingency of her story and the flawed humanity of Americans, Ecuadorians, and Waorani alike.

Her conclusion merits quotation at length:

As far as the missionary-Waorani story, perhaps it is time for critics to concede that SIL workers did help the Waorani end some patterns of internal violence and survive contact with outsiders. By the same token, it may be time for North American evangelicals and also missionaries to recognize that the Waorani do not live in a historical, cultural, or geographic vacuum, nor are they frozen in time… The Waorani are much more than the ‘supporting cast’ for missionary heroism. They are people with a unique language, culture, and geographic location that – in common with all other cultures – reflects both the goodness and the brokenness of the created world.

To the first point, it is easy to say that missionaries should just leave well enough alone. Too easy. Without question there are hosts of instances in which people would have been better off without unwanted missionary intrusions. Long, though, is quite clear that this is not one of those instances. “More than 60 percent of Wao deaths during this period were violent ones,” she estimates, making the Waorani one of the most violent cultures on earth.” The missionaries, and Dayomæ in particular, told them that God and Jesus opposed retribution. They should stop spearing each other. Long notes that there were some retributive killings in the decades that followed, but she also suggests that the missionary message made a direct contribution to the survival of the Waorani. Did the missionaries help the Waorani navigate the cultural and economic challenges that followed contact? In some cases, yes. In other ways, Saint in particular circumscribed the ability of the Waorani to make their own choices and develop their own strategies.

Long observes that the future of Waorani Christianity is very uncertain. Only a minority of Waorani ever embraced Christianity, and Long’s reflections on the difficult task of translating Christianity into not only Wao tededo (Waorani language) but Waorani culture are full of insight. Today, many Waorani do not learn Wao tededo (Waorani) as their first language. They learn to read Spanish. And while Christianity provided a means for Waorani in the 1960s and 1970s to access economic resources and still conflicts among themselves, it is not as clear in practical terms what Christianity offers to younger generations of Waorani.

I could not recommend God in the Rainforest more highly. It is a model work of scholarship. Long brings her readers into the cultural borderlands of missionary-Waorani interactions. At times, she proceeds with a light touch, as when the Waorani and the missionaries astound each other with their strange ways. And what a cast of characters: Dayomæ, Rachel Saint, Labaca. God in the Rainforest is also a model work of Christian scholarship in particular. Long proceeds with both humility and empathy. She acknowledges the limitations of her knowledge, punctures myths when they need to be punctured, but also honors the lives of the complex people who populate God in the Rainforest. 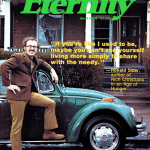 December 18, 2019
Evangelizing the Evangelicals: Peaceful Christians in an Age of Violence
Next Post

Evangelical
What Does It Mean to Be "Born Again"?
Anxious Bench
TRENDING AT PATHEOS Evangelical