The Abyss of History

If the past several weeks has taught us anything, it is that history can be unpredictable and unnerving. A year ago, who could have predicted that American cities and states would come to a virtual standstill due to a virus strain derived from bats that originated in Wuhan, China?

Politicians often speak of the “right side of history” and philosophers such as Hegel and Marx were once given to speaking of the “laws” of historical development. The sudden intrusion of COVID-19 into out lives should make us realize how hollow these claims are, often based on wishful thinking, the triumph of desire over experience.

History instead can be an abyss, a nightmare, a tragedy. To help us recognize this, journalists and pundits have lately called our attention to how the Bubonic plague devastated Europe in the Middle Ages or to the impact of the influenza pandemic of 1918-19, which came on the heels of another largely unforeseen tragedy: the Great War (1914-18) with its wanton bloodshed.

Arguably, the greatest Christian work on the philosophy history, Augustine’s City of God, was the product of the Bishop of Hippo coming to terms with what many felt was unthinkable: the collapse of the Roman Empire, the wreckage of known civilization.

I hope our present moment is not as dire as Augustine’s. But perhaps it has given us a fortuitous opportunity to reflect of the transience and fragility of things human. With a surfeit of free time on our hands, perhaps now is even the time to take up Augustine’s tome and read it—over 1200 pages in the Penguin edition!

But if the City of God proves too intimidating, let me suggest another book: Jacob Burckardt’s Reflections on History. The son of a Reformed pastor in Basel, Switzerland, Burckardt (1818-97) was one of the greatest historians of the nineteenth century. Taking aim at Hegel’s overconfidence in mapping the course of history and at Rousseau’s optimistic views of human nature, Burckhardt offers a wiser, pessimistic vision, evincing profound awareness of the manifold contingencies, disconsolations, and ironies that time invariably sets upon us.

I especially recommend two chapters in the book: one on “fortune and misfortune in human history” and another on “crises in history.” Both speak to our present moment. In the former, Burckhardt reminds us that from time to time “there are absolutely destructive forces [in history] under whose hoofs no grass grows.” When we are in the grip of these forces, “imponderabilia” reigns; it is hard to know whom to trust and what to believe. In the latter chapter, he defines a historical crisis as “the acceleration of the historical process” that brings unwelcomed events to a people, state, or a region. He offers invasions, coups d’état, and warfare as examples; the goal of those experiencing in them is often simply survival. “Crises [also] clear the ground, firstly of a host of institutions from which life has long since departed, and which, given their historical privilege, could not have been swept away in any other fashion.”

Genuine crises, interestingly, can also have an upside for Burckhardt; they rouse us from intellectual and moral complacency, engender thought and contemplation, and can even result in great art and scholarship: “Great and tragic experience may mature the mind and give it a new standard, a more independent judgement of life on earth. If it had not been for the collapse of the Roman Empire in the West, St. Augustine’s City of God would not have become such a great and independent book, while Dante wrote the Divina Commedia in exile.”

In a theological register, I would add that crises can also concentrate the mind on spiritual truths that we too often ignore when things appear to be going well. For my part, I find myself lately turning to lines from Psalm 46:

God is our refuge and strength,
a very present help in trouble.
Therefore we will not fear though the earth should change,
though the mountains shake in the heart of the sea;
though its waters roar and foam,
though the mountains tremble with its tumult. . . .
Come, behold the works of the LORD,
how he has wrought desolations in the earth.
He makes wars cease to the end of the earth;
he breaks the bow, and shatters the spear,
he burns the chariots with fire!
“Be still, and know that I am God.
I am exalted among the nations,
I am exalted in the earth!” 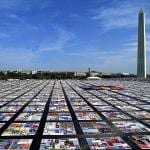