Today I’m happy to welcome back to The Anxious Bench Miles Mullin of Hannibal-LaGrange University. Miles wrote for us in 2013-2014, and his posts on the history of the religious right and religion in the 1950s remain among the most popular in our archive. After spending five years in administration at Hannibal-LaGrange, Miles returned to the ranks of the faculty to teach religious history. Today he reviews a new religious biography of one of the more significant figures in the history of American foreign relations. 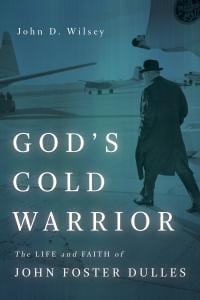 With the publication of God’s Cold Warrior: The Life and Faith of John Foster Dulles by John D. Wilsey, Eerdmans has added another fine volume to its Library of Religious Biography Series. While most of the other volumes in the series take as their subject religious professionals of some sort (e.g., Jonathan Edwards, Charles Finney, and Howard Thurman), this volume by Wilsey, who serves as Associate Professor of Church History at the Southern Baptist Theological Seminary, presents the religious biography of a figure not best known for his religious life—a tricky task. Wilsey, who conducted most of the research while serving as a Fellow in Religion and Public Life with the James Madison Program at Princeton University, is up for the challenge. He ably recounts the manner in which Protestant liberalism of the first half of the twentieth century was the “animating force” to Dulles’s life, especially in his public life where he served as a lawyer, churchman, and a diplomat (9). Along the way, he provides a window into a life “characterized by the privileges of wealth, a powerful support network, and the singular opportunities that attended those privileges” (171). Dulles made good use of those opportunities, seeing it as his Christian duty to serve his family, his denomination (Presbyterian), and his country in whatever capacity privilege had afforded him. After graduation from Princeton, Dulles embarked on a career as an attorney, then as a civil servant in various diplomatic roles. With the election of Dwight Eisenhower, he became Secretary of State, the same position his grandfather and uncle had held. At each step, the Christianity John Foster Dulles (1888-1959) learned growing up in the home of his liberal Presbyterian minister father, Allen Macy Dulles (1854-1930), and pious mother, Edith Foster Dulles (1863-1941).

(Note: for readers unfamiliar with the authentic piety of elite Protestant liberals of the late 19th and early 20th century, Wilsey’s description of Dulles’s childhood is worth the price of the book.)

Whereas many interpreters perceive a marked difference between the foreign policy of Dulles as a younger man and that of Dulles as Secretary of State, Wilsey aims to show the consistency in his approach to foreign policy, grounding it in Dulles’s religious commitment. If that grounding seems a little thin, that is due to Dulles’s own thin theological commitments—something Wilsey’s notes several places (e.g., 121, 152, 189)—not the abandonment of his prior Christian realism and internationalism to become the Eisenhower administration’s “priest of nationalism” (à la Mark Toulouse, 151). Without a doubt, Toulouse’s “smart, persuasive, and difficult to challenge thesis (152),” is Wilsey’s greatest interpretative obstacle. Wilsey tackles this challenge head on, providing a nuanced perspective that argues that Dulles maintained a consistent commitment to the moral law as the center of diplomacy throughout his career.

Early in his diplomatic endeavors, Dulles imbibed deeply from the failure of Versailles, embracing a commitment to internationalism that insisted that the fates of the nations were intertwined, and that each nation should be allotted equal treatment in the changing international order, regardless of past actions. In Dulles’ estimation, the problem with settlements like Versailles (1919), the Washington Conference (1922), and the Kellogg-Briand Pact (1928) was that they attempted to maintain the status quo in a world of change. International relations must be built around the expectation of change and the equal treatment of the nations in the emerging new world order in accordance with the moral law. This “new spirit of internationalism was the key to preventing future wars” (79). War itself, not a specific evil nation, was the main threat.

A committed internationalist, the religious “turning point of his career came in 1937 after attending the Oxford Conference on Church, Community, and State” (101). This pivotal year marked his ascendancy as an expert on international relations as well as the inclusion of the church’s moral voice into his understanding of world order. Two years later, in his 1939 work War, Peace, and Change, Dulles warned that, in the absence of a national religious vitality, nations would deify their own state and demonize other nations in the international struggle. Here is where Christianity must play a guiding role among the “Christian nations.” Consistent with Protestant liberalism’s understanding of Christianity as ethics, Dulles believed that the churches of the Christian nation should teach that sacrifice for others is better than sacrifice for nation (119). Thus, the “Fatherhood of God, and the Brotherhood of Man” would provide the religious grounding needed to invigorate the moral basis of an international order that treated nations as equals, leading to a better future. For Dulles, this was the only way forward in an international arena where change was the only constant.

How then, did Dulles become the coldest of Cold Warriors, working tirelessly not only to maintain the international status quo through containment, but to exclude the Soviets and their allies from the international community, aiming for the rollback of communism and the undermining of Soviet sovereignty?  In Wilsey’s telling, the answer is grounded, as we would expect, in the moral law, and the explanation runs through the Treaty of San Francisco.

Following the end of hostilities in World War II, Dulles believed that the United States could “win the Soviet Union over by modeling the example of a transcendent moral law” (155), but by 1949 he had arrived at the conclusion that “communism, unlike fascism, could not be seen as a temporary anomaly to be dispatched in due time” (156). By its nature, communism was a different sort of threat—one that was fundamentally opposed to the moral law upon which internationalism was based.  As Dulles had written in his 1950 book War or Peace, Soviet-backed communism was committed to world domination “by whatever means necessary” (156), not the moral law grounded in freedom and liberty. Thus, in Dulles’s view, the old internationalism did not apply. In fact, it could not be applied. To uphold the moral law, it was necessary to recognize the new binary nature of the world and to embrace the role of the United States as purveyor and protector of the moral law. What is important to note is that this was a position he adopted prior to serving as Secretary of State, a position which guided his actions in the San Francisco process as he sought a world secure from the threat of an enemy ideologically opposed to the moral law. Events across the world such as the 1949 “fall of China” and the invasion of South Korea in June 1950 seemed to confirm this conclusion. Thus, as he ascended to the role of Secretary of State, he did not adopt a new approach but brought this conviction with him to the office.

God’s Cold Warrior is not a diplomatic history or a political biography. It is a narrowly focused religious biography that nonetheless gets the details of Foster’s public life correct. It aims to show that Dulles’s liberal Protestant faith informed and formed his thinking about diplomacy and the international order. Those interested in religion as a real force in shaping people’s lives, beliefs, and actions will find it of great interest. Those looking for an ethical assessment of the Suez Crisis will be disappointed.

In analyzing historical subjects, it is always more challenging to show consistency across time than it is to show change. In God’s Cold Warrior, John Wilsey made a yeoman’s effort to do so. Drawing on prior works and rich archival evidence, Wilsey makes a case for John Foster Dulles’s consistency. Whether or not a particular reader buys this argument likely will stem from that reader’s interpretation of the Cold War. Was it something unprecedented or not? Those inclined to see the Cold War struggle as an existential struggle will see validity in Wilsey’s portrayal of Dulles and his consistency. Those not so inclined will likely see things differently. 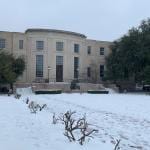 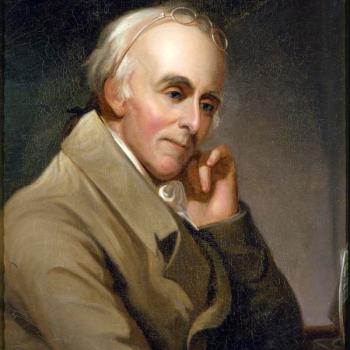