To Trap Him in His Words

I recently had a sobering lesson in how we understand the New Testament. Obviously, it’s hard to make much sense of that text without at least  some knowledge of the Greek in which it was written, to appreciate the nuances of the text, all the allusions and cross-references. But further, we have to understand that when that text’s authors and readers were referencing the Old Testament – which they did very frequently indeed – it often wasn’t in the form that we know today. We may know that fact intellectually, but the implications might escape us. So I offer another of my learned disquisitions (OK, they’re rants) about the importance of the Septuagint for understanding Christian origins.

As I remarked recently, I am working on Psalm 91, and among other things, about what I believe to be its powerful and often unsuspected influence in many sections of the New Testament. Here is one example that I am arguing – it’s by no means the most important, but it does make the point. All three synoptic gospels tell the story of Jesus’s opponents trying to trap him on the issue of paying tax to Roman authorities, which Jesus resolves with his famous words about rendering to Caesar. But in Matthew’s gospel only, the exact choice of words for trapping is distinctive. Jesus’s Pharisaic opponents plan to “trap him in his words,” which leads to the famous dialogue about whether it is right to pay tax to Caesar (Matt 22.15). The King James version offers “how they might entangle him in his talk.” 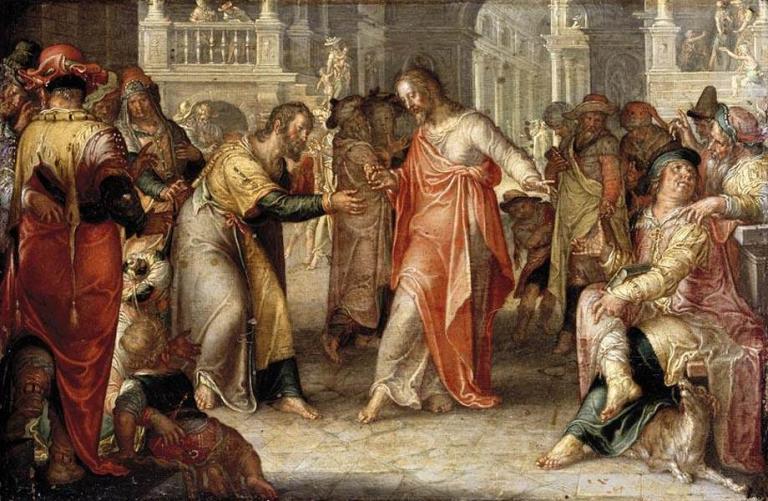 I am confident that Matthew’s “trap him in his words” (or “entangle him in his talk”) is a direct allusion to Psalm 91, and specifically to verse 3 in that piece. You will then test that statement by looking up the psalm in any easily available Bible, and you will soon conclude that no such parallel exists. In the NIV, that verse promises deliverance “from the fowler’s snare and from the deadly pestilence.” The KJV offers “the snare of the fowler, and from the noisome pestilence.” Well, okay, we have a snare or trap or entanglement, but nothing else seems even slightly relevant to the Matthew passage. So how on earth do I draw any connection whatever?

The first readers and hearers of Matthew’s gospel overwhelmingly operated in Greek, and the Bible they knew was the Septuagint translation, created perhaps three centuries before Matthew’s own time. That translation is a fine piece of work in most ways, but the scholars involved had their own quirks and foibles, and sometimes they just made errors. In that Septuagint, verse 3 offered defense against the trap (pagidos) of the thereuton, which is more likely to mean hunter than fowler. That in itself did not massively transform the verse’s meaning, but in the following words, our old friend the “noisome pestilence” morphed into the harmful logos or word – what a seventeenth century commentator would nicely render as “the word that be-muddeth.” The error was easy enough, a confusion of the Hebrew word deber, pestilence, with dabar, word. The same blunder recurs in verse 6, where a plague becomes a generic “thing,” pragmatos, almost a thingamajig.

Any reader of the Bible in Greek would see no explicit reference to a pestilence or plague in verse 3, but would rather have to puzzle out why a bitter word was ranked so high among the menaces itemized elsewhere in the psalm, all the plagues and evil spirits and harmful beasts. With that in mind, let’s look again at Matthew 22, where the Greek text about “trapping in words” reads pagideusosin en logo. As I suggested, the odd Septuagint (mis)translation of Ps. 91.3 closely juxtaposes the reference to the hunter’s snare (pagidos) with the harmful “word,” logos: ek pagidos thereuton kai apo logou tarachodous. As in Matthew’s gospel – and in no other contemporary examples that come obviously to mind – trapping is linked to words. The English translation of “to trap,” as mere metaphor, loses the very specific implication of a hunter’s cunning and deadly device. Nor do the English translations reflect the three different words that each Synoptic author uses for “trap,” each with its own implications and allusions.

That connection to Psalm 91 would have occurred immediately to the gospel’s earliest audiences, who knew that psalm so well, and in so many significant contexts and functions. Matthew himself had already allowed the Devil to quote it, in the description of Jesus’s Temptations in the Wilderness. Once that allusion registered, the hearer would set the Matthew 22 story in the proper context, with the Pharisees as the would-be hunters laying their snares, yet failing, because God would deliver the faithful. Once we know that connection today, it adds enormously to reading the narrative that follows, as the trap forms around Jesus, but he extricates himself. Jesus is the potential prey – yet with one bound, he is free.

A Psalm 91 reference here would also contextualize Jesus’s foes quite powerfully. At the time, this was the main text for use in spiritual warfare and demon-fighting, and was used thus at Qumran. The hunter, or fowler, was the Devil, or a demon. So in this reading, the Pharisees were demonic. That reading is reflected in another (mis)translation, where is our Psalm 91.6 talks about “the plague that destroys at midday.” But the Septuagint renders this as “the noonday demon,” daimoniou. The whole Septuagint version of Psalm 91 is highly demonic in a way the Hebrew just is not, and nor are our modern versions.

Matthew 22.15 has a close verbal echo in 12.14, when again the Pharisees plot together against Jesus, in this case to destroy him rather than to trap him. That earlier line in chapter 12 comes immediately before a heated row with the Pharisees about casting out demons, daimonia, invoking Beelzebub, and other appropriately diabolical themes (12.22-29). That in turn leads into a passage about good and bad words, by which one many be condemned or acquitted (12.33-37). The whole passage offers a neat parallel and prefiguring of the chapter 22 episode I have discussed, and at every point, the Septuagint’s Psalm 91 is lurking in the background.

That is one small and specific example, but issues like this run throughout the New Testament. If you don’t refer to the Septuagint, for instance, then the Epistle to the Romans can sound like a horrible mishmash of half-remembered misquotations from the Old Testament. But in fact, it’s anything but that. Once you realize how thoroughly acquainted Paul was with the Septuagint, things make a lot more sense.

How We Lost the Septuagint, and Why It Matters

It also helps to recall what that Septuagint actually is. We usually speak of it as a flawed or tendentious version of a pristine Hebrew original, and I have done something like that here. But the standard Masoretic Hebrew text did not emerge in final form until much later, and did not achieve canonical status for centuries. The Septuagint reflects rival Hebrew readings that were quite standard at the time of the translation, and which are, for instance, often reflected at Qumran. The Septuagint is way more respectable than we often think, and it is a real shame that we have lost it in mainstream usage.

In the sixteenth century, Christian churches rediscovered Hebrew, and they rapidly applied that skill to reading the Old Testament. That event created an unbridgeable linguistic gulf between all later Christian generations and the world of the New Testament and the Church Fathers. If we know the Old Testament in a reliable translation from the Hebrew, like the NIV, that is a treasure to have, but often, the readings we find there are simply not the ones that the early Church knew. The problem for modern readers is that our modern Old Testament translations are just too accurate to let us understand the church’s earliest thinking.

So if we do have to choose an Old Testament version to use as background for studying the New Testament, if we absolutely must choose between a scholarly rendering of the Hebrew Masoretic text, and the error-prone Septuagint … Then, to adapt the title of a film I love dearly: Let The Wrong One In.

Of Asps, and Even More Asps

On a trivia note, I offer a quick story of “those wacky translators at work.” As part of my Psalm 91 wok, I have been looking at Isaiah 11.8, which is part of one of the most famous passages in the Hebrew Bible, portraying the peace and harmony of the messianic age. In the NIV, verse 8 reads as follows: “The infant will play near the cobra’s den, and the young child will put its hand into the viper’s nest.” In the Hebrew, there are two not too common words for types of venomous snake, respectively pethen, and the more obscure tsepha’. There is a lot of debate about exactly what each refers to, but the point is that there are two different very dangerous snakes, which are juxtaposed in poetic balance. This is the classic parallelism that we so often find throughout the psalms.

Now move forward to (probably) Alexandria around 200 BC, where a translator was working on the Greek translation. He decided easily enough that the first beast was an asp. He then sat long and hard looking at his sources and tried to work out what a tsepha’ might look like, the only minimum requirement being that it has to be something, anything, except an asp, so as not to duplicate the word. Parallelism had to be preserved. At some point, he concluded, “It’s just a snake. I have a lot of work to do.” The Septuagint as we have it thus reads “And the young child shall put his hand over the hole of the aspidon, asp, and on the lair of the offspring of aspidon, asps.” Sometimes, you can tell when translators have just had a long day.