Here is a question. What passages in the Bible are deliberately intended to target or disagree with other parts of the same book? Not just passages that contradict others, but where author A deliberately sets out to disagree with author B. I offer a couple of examples, but there must be more.

By way of context, I have been working on a very influential and popular text, namely Psalm 91. It has been so popular through history because it appears so wildly optimistic in the blessings it promises. People place their total trust in God, they pray and lead holy and generous lives, and according to the explicit words of 91, they are immune from demonic assault and misfortune. The psalm’s warranty is clearly stated: if you take refuge in the Most High, then there shall no evil befall thee. That’s no evil. Now, of course, the psalm can and must be read in much more sophisticated and intelligent ways, but that crude materialistic reading is and has been very widespread.

Yet observed experience shows that such assertions of material blessing are false, or extraordinarily naive. While it is pleasing to be assured that the faithful person will alone survive a cataclysm that kills thousands all around him or her, such a statement simply clashes with reality. Disasters do indeed afflict good and faithful people, while leaving the deeply ungodly quite unscathed. And if the psalm’s final verse promises long life, we can point to many great and holy people who died at tragically early ages, even by the standards of pre-modern societies. Jesus himself probably died in his early thirties. For many modern readers, the psalm’s confidence is more of an obstacle than an attraction. It sounds like the Psalm of Pollyanna.

Nor is such an observation confined to cynical modern times. As is well known, the Biblical Book of Job sought to understand why God permits bad things to happen to good or even saintly people. As Job struggles to understand the calamities he has experienced, he is confronted by the ultra-pious and superficial Eliphaz the Tamanite, who argues that if Job is suffering, it must be because of something he has done to anger God, some secret sins (Job 5). If Job denies having sinned, he is deceiving himself and others.

Already in this ancient setting, Eliphaz supports that stance by offering what scholars commonly agree to be a close paraphrase of Psalm 91:

Already too, the reader is intended to conclude that Eliphaz is too simplistic, and that the real world does not operate as he (or the psalm) is suggesting. The author of Job is either attacking the psalm, or else popular misconstructions of it – and let it be said, misconstructions that have continued very much alive into modern times.

If this is not the only Biblical instance where one book specifically targets a passage in another, such overt intra-scriptural sniping is not common. So what other examples are there? Last year, I wrote about a quite radical passage in Ezekiel that starkly rejects other Biblical texts that can be read as justifying child sacrifice. Unlike Job, Ezekiel is not going after any specific passage, or at least I can’t see which one it might be.

In the New Testament, one obvious example is in the Epistle of James, where chapter 2.14ff is a tirade on faith and works, which harshly denounces any approach that exalts faith while ignoring works and charity. That has to be an attack on Paul’s epistles, and that fact alone thoroughly explains why Martin Luther so detested James. Again, James might be attacking Paul, or extremist readings of Paul, but his intent is certainly polemical.

So if we stay within the confines of the canonical Bible as acknowledged by Protestants, say in the NIV, what other examples of intra-scriptural polemic come to mind? 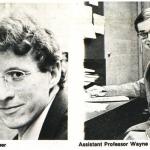 April 20, 2021 The Evangelical Baptists Who Made "Biblical Womanhood"... and Those Who Tried to Unmake It
Recent Comments
0 | Leave a Comment
Browse Our Archives
get the latest from
Anxious Bench
Sign up for our newsletter
POPULAR AT PATHEOS Evangelical
1

The Opium of the People
Cranach
Related posts from Anxious Bench