Church, Government, and Business: Can the Christian University Serve All Three?

Last week I mused about a familiar question in higher education: are universities like mine dedicated to knowledge and formation as intrinsic goods, or do they serve — as former University of California leader Clark Kerr argued after World War II — as instruments of external constituencies like government and industry? Today let’s just assume that the instrumental emphasis prevails… and use a bit of Bethel’s 150-year history to explore a different tension:

Can a university like Bethel satisfy the expectations of all those who would use it as an instrument when those external constituents have conflicting interests?

The problem starts with our oldest constituency: the religious one. Long after the Swedish Baptist Seminary grew into Bethel College and Seminary, it remained connected to its founding denomination and churches. Even longtime president Carl Lundquist (1954-1982), who so strongly believed in the importance of a Christian liberal arts education for its own sake, also insisted that Bethel was an extension of what was then called the Baptist General Conference. As the BGC “on mission in education,” Bethel needed to remain dependent on its churches, argued Lundquist. Fatefully, that meant declining “to build up large endowment funds,” but also that Bethel was historically leery of becoming too closely attached to another external constituent with an interest in higher education: the federal government.

On the one hand, Bethel’s participation in the federal financial aid system inaugurated by the G.I Bill helped it double in size twice during Lundquist’s tenure. But in his 1964 report, Bethel’s president acknowledged that participation in federal programs posed “a special problem at the point of relating our historic Baptist principle of separation of church and state to the complex political and social implications of this matter.” While Lundquist acknowledged the state as having a legitimate interest in advancing higher education, both public and private, for the public good, he fretted that government ties would complicate Bethel’s ability to continue serving as “an instrument of the church.”

Lundquist expressed particular wariness about accepting grants from the National Science Foundation and other agencies emphasizing what we would now call STEM fields. As a history professor, I found especially noteworthy his concern that a government fighting a cold war placed “greater emphasis upon science than upon the humanities which traditionally have bulwarked the religious objectives of an undergraduate program” — and might then withdraw that support as its priorities shifted. But Lundquist also worried that the government might try to restrict how the sciences could be taught at a church-related school. Could biology classes, for example, “which are considered by the government to be non-religious in nature, be taught on a Christian campus apart from a theistic and Biblical viewpoint? Is not this Biblical integration the very raison d’etre of schools such as Bethel?” (emphasis original)

Such concerns survived Lundquist’s retirement in 1982. It’s only been in the past dozen years or so that six-figure NSF and other federal grants have become a hallmark of our fast-growing STEM programs, especially in physics/engineering and biology.

In that sense, we’ve made our peace with the need to work with one external constituent (government) in order to meet the needs of another (industry) that screams out for more and more STEM training. But tensions between religion and science linger, as the ongoing COVID pandemic reminds us.

I don’t have to make calls this tough, so I don’t know why Bethel is one of the only private colleges in Minnesota not to require vaccinations or indoor masking (save in classrooms where social distancing is impossible) as we start another year in the middle of the latest COVID surge. But I suspect it has something to do with the fact that we’re not just a Christian university, but an evangelical one — a tuition-dependent institution that primarily enrolls students from the American religious population that is among the most hesitant to get vaccinations. Last May, the head of enrollment at a similar institution told Christianity Today that a vaccine requirement would cause something like 15% of its students not to come back, a shortfall that Bethel can ill afford.

But given the strong scientific consensus behind vaccination and masking, I wonder if there’s not a chance that we’re solidifying our appeal to one constituency at the expense of undermining our standing in the eyes of others — employers, graduate and medical schools, and government agencies — as a Christian liberal arts college with unusually strong science (and health science) programs.

Here I think the tension has less to do with the state (though I can imagine how some of our sponsor churches would respond if and when we acquiesce to the Biden administration’s mandate for vaccinating employees) than with Kerr’s other primary constituent: industry. If we’re unwilling to challenge our religious constituency to “trust the science,” then what message are we communicating to corporate partners whose needs have helped to drive our emphasis on STEM — e.g., hospitals that help train and then hire our nurses and physician’s assistants; or medical device companies and other manufacturers that value our science and engineering majors’ extensive experience in research?

And, in the long run, our stance on COVID may be the least of our worries in this realm.

In his 1964 report, Carl Lundquist sounded only lukewarm about the potential for Bethel to form partnerships with the private sector. “Bethel is glad to thrust forth trained leaders into the business world,” he wrote, “not just to serve business needs but as an arm of the church to place dedicated and vital Christians in spots of strategic influence for Christ in our world.” But he wasn’t sure that Bethel should “expect business support in return,” and he wanted to be careful about collaborating with any business “which happens to be contrary to the mores of Bethel and her [church] constituency.” Indeed, he warned that a Christian college “heavily dependent upon organized business philanthropy… may jeopardize to an important degree its independence from and its freedom to be a critic of society, including business.”

But since the development of the Business major in the mid-1970s, corporations have become increasingly important constituents for Bethel University. Businesses not only hire our graduates (even 30% of those finishing humanities majors like mine), but participate in their training, both hosting internships and providing faculty for popular undergraduate, adult, and graduate programs in business and organizational leadership. Increasingly, corporations provide direct and indirect revenues through partnerships with Bethel, and their executives now dominate our governing board — which last year hired a former Medtronic vice president as Bethel’s first president not to come from the clergy or the academy. 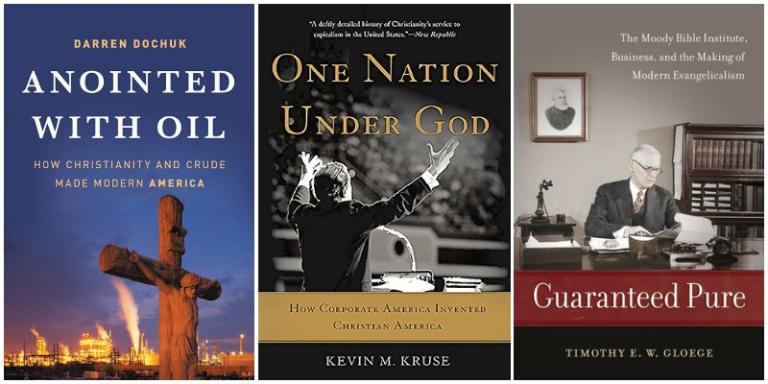 That a historically evangelical university enjoys an increasingly close relationship with the business world should be no surprise to anyone who has sampled the growing body of scholarship on the intersection of the history of Christianity and capitalism in this country. (See, for example, Kevin Kruse’s One Nation Under God, Darren Dochuk’s Anointed with Oil, and our former colleague Tim Gloege’s Guaranteed Pure.) While our business program has always emphasized themes like ethical conduct, personal integrity, and social responsibility — and other faculty have continued to offer the criticism of capitalism that Lundquist expected from Christian scholars — our leaders do not seem unusual among evangelical Christians in seeing basic alignment between the values of their religion and those of the market economy.

Or, at least, in seeing the business world as a less dangerous partner than the federal government. Since the Supreme Court’s Obergefell decision in favor of same-sex marriage, I can’t count the number of times that I’ve heard a Christian college leader warn of the existential threat posed by a state that doesn’t see religious liberty as justifying employment, housing, or other discrimination against LGBTQ Americans. (I’ve previously interviewed Shirley Hoogstra, the president of the Council for Christian Colleges and Universities, about that organization’s support for a compromise proposal, Fairness for All.) I’m not sure that many such colleges could withstand the actual loss of, say, federal financial aid or tax-exempt status — nor that such a change is likely to happen, if some recent Supreme Court rulings about religious exemptions are any predictor — but closer partnerships with a more-friendly private sector at least provide some kind of hedge.

But that presumes that corporate values remain in alignment with evangelical interests.

I don’t know if conservative Christian commentators like Ross Douthat are right that we’re seeing the triumph of “woke capitalism,” in which corporations use their economic power as leverage to advance social progress. But if you make a list of the companies that serve as our partners, host our interns, and employ our graduates (and trustees), then search for those organizations’ stances on LGBTQ equality, inclusion, and pride, you might well wonder how long those external constituents will want to remain connected to any Christian university whose religious constituents expect it to hold the line on “traditional” sexual ethics.

September 20, 2021
Refugees and the Enduring Cruelty of the War on Terror, Twenty Years Later
Next Post

September 22, 2021 The 2020 Census, Immigration, and the Future of American Evangelicalism
Recent Comments
0 | Leave a Comment
"Impressive article. Provides the necessary perspective for entering into an informed discussion about the science/religion ..."
the old scribe Science, Religion, and Nineteenth Century Protestantism
"Very helpful! Thanks! It seems history has always been used as a weapon."
Roger McKinney Science, Religion, and Nineteenth Century Protestantism
"You have done nothing to refute my point. Certainly we should do the affirmative things ..."
NorrinRadd Ron Sider and the Fate of ..."
"When we try to prohibit behavior that many people consider, we simply drive the behavior ..."
Silverwolf13 Ron Sider and the Fate of ..."
Browse Our Archives
Related posts from Anxious Bench