Empires commonly have religions that enjoy an established or favored status, and in many cases, those empires suppress rival forms of faith. When we write the history of empires and religion, we often have to look beyond the heartlands of a given regime, and turn to the borderlands, and to the smaller states or statelets on the periphery. Those border states can serve as refuges for groups fleeing official persecution, and they become hothouses and laboratories, from which new movements emerge. The Romans called their extended frontier the limes, which gives us the word “liminal.” In the history of religions, so much development and evolution is liminal, a thing of the borderlands, and I don’t mean the borderlands of faith or rational inquiry.

Governments throughout history have disliked regions that are difficult to control. They strongly prefer fertile lowlands over pastoral uplands or mountain regions. They dislike sprawling cities, especially cosmopolitan seaports. In modern times, this is why nations like to build new capitals in safe inland regions like Brasilia and Abuja, rather than obvious port cities like Rio do Janeiro or Lagos. (Don’t get me started on Washington DC, and why the US never chose a capital at New York or Philadelphia). Governments especially loathe border regions, where foreign influences can penetrate easily, and where local people can easily flee where the writ of the law does not run. This is all the more true when the nation on the other society of that border is hostile or uncooperative.

Those general statements go far towards explaining religious configurations, especially when a government tries to enforce a strict orthodoxy. Religious minorities do best in jurisdictional borderlands, in regions where armies and police, Inquisitors and tax collectors, are least likely to penetrate. That is true whether we are dealing with both Catholics and Protestant Dissenters in early modern England, or Protestants in early modern Catholic Europe. It is also true of Christian minorities in Muslim states. Show me a map of the borderlands, and a relief map showing regions over two thousand feet or so, and I will show you where religious dissidents are most likely to survive and flourish.

Sometimes, those distant marginal regions prove to conceal hidden wealth, which give unexpected power to dissident minorities. Hence the Protestant Dissenters or Nonconformists of England and Wales found themselves in the coal-rich regions that became the centers of that country’s Industrial Revolution. In the Arabian peninsula, the long-despised Shia Muslims happened to be sitting on the region’s richest oil reserves. Never say that God lacks a sense of humor.

I posted recently on the early Christian expansion eastwards from Jerusalem, towards the powerful Persian realms successively ruled by the Parthians and the Sassanid dynasty. From the second century AD onwards, the Roman Empire clashed repeatedly with this eastern superstate, and the intervening lands often changed hands. Although the Sassanids based their power in Mesopotamia, that region briefly fell under Roman power in the 110s. From the fourth century, a Christian Roman realm confronted a no less militantly Zoroastrian Persia. 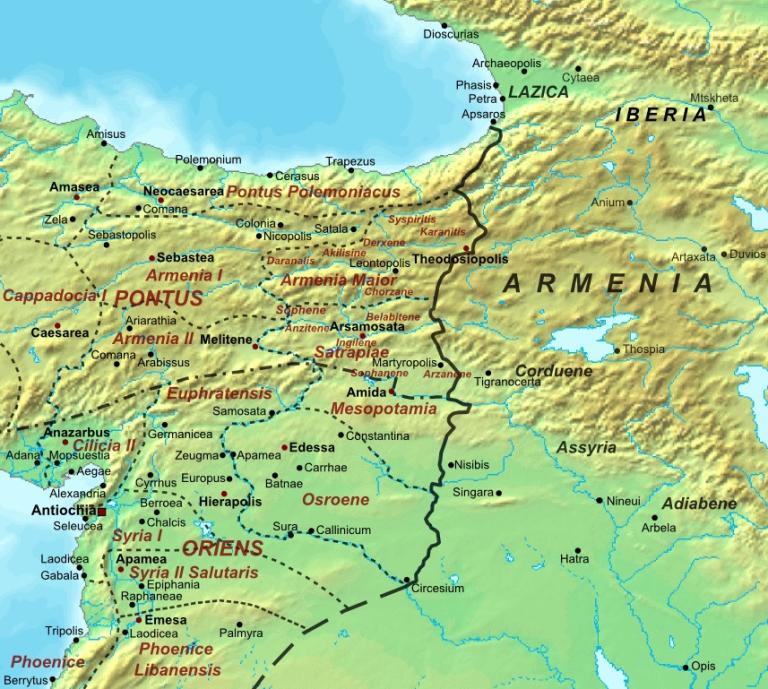 Through the seventh century, the dueling superpowers repeatedly clashed in the lands that we would now call Northern Iraq, Syria, and Eastern Turkey. Ultimately, the Romans utterly crushed the Sassanid Persians, but it was a Pyrrhic victory, as the two exhausted empires fell easy prey to the surging force of Islam.

That superpower conflict had vast religious consequences. For one thing, the imperial rivalry meant that the two states were forced to tolerate a network of smaller kingdoms between their borders, which could serve usefully as buffer states, leaning from one side to another as conditions changed. Armenia was the greatest of these states, but other kingdoms and city-states rose and fell over the centuries – Osrhoene, Atropatene, Palmyra, and others. Two great border states, Armenia and Georgia, stubbornly maintained their Christian faith through the millennia, a stance made possible by their mountainous terrain. Many alternative and apocryphal scriptures that were lost elsewhere survived in Armenia, and in the Armenian language.

The name of Atropatene, by the way, survives today as Azerbaijan.

As successive wars and persecutions swept the two major empires, so it was natural for refugees and dissidents to flee beyond the frontiers, making these small states a hothouse of religious development. The ruling family of Adiabene accepted Judaism. In the second century, Osrhoene became the first kingdom anywhere to establish Christianity as its official religion. When Roman religious constraints became too much, the center of Eastern Christian faith and scholarship moved eastwards across the border, from Edessa to Nisibis, a spiritual and intellectual hub that remained legendary well into the Muslim period.

Moreover, great powers used this religious complexity to justify their own policies. The Romans used the persecution of Christians to justify wars and invasions. The Persians in turn favored the Church of the East, the Nestorians, as a counterbalance to the Catholic/Orthodox. They also favored Jews against Roman-style Christians, leading to a terrifying massacre of Christians when the Persians took Jerusalem in 614. The Fall of Jerusalem was one of the really traumatic events of Late Antiquity: its shock-waves can be observed in the Qur’an, among many other places.

Trace the imperial frontiers, and you follow the patterns of religious development. And even the emergence of whole new faiths.

March 21, 2022 The Scandal of the Evangelical Professor Mommy
Recent Comments
0 | Leave a Comment
"So explain why most historians are Marxists."
Roger McKinney The Annales Movement (Part Two) | ..."
"Appreciate the historical tracking of demographics, religious practices, and geographical implications. It's important to tease ..."
Daaj The Southernization of American Evangelicalism (and ..."
"The bullet points of your plea seem to reveal that some struggle with basic human ..."
Gary An Open Letter to Complementarian Women
"are you a nevertrumper, and have you been seeing the Black-exodus out the Northern cities ..."
Frank Holzhauser The Southernization of American Evangelicalism (and ..."
Browse Our Archives
Related posts from Anxious Bench