A Forgotten Hatred: Why Don’t We Study Anti-Protestantism?

Last time, I discussed an artistic representation of the Catholic Church overthrowing the evil heresy of Protestantism. As I suggested, this gets to a vast and under-studied historical topic, namely that of anti-Protestantism – a term I will define more precisely below. This is a wide-open topic for rising scholars looking for a research agenda, or indeed dissertation topics.

The range of academic books on anti-Catholicism is vast to the point of crushing, but try finding books on anti-Protestantism. Just at random, because it is a system I know well, I entered the search term anti-Catholicism into Penn State’s library catalog, and got 912 entries: 55 of those came from the past decade. Searching for anti-Protestantism found an awe-inspiring eight entries, five of which came from the seventeenth century. The only modern references were Jenny Franchot’s Roads To Rome: The Antebellum Protestant Encounter With Catholicism (University of California Press, 1994 – cited twice in the catalog entry); and a superb Penn State dissertation by Bill Cossen entitled “The Protestant Image in the Catholic Mind: Interreligious Encounters in the Gilded Age and Progressive Era” (2016) – which I directed! Just a plug: Bill Cossen’s book will appear next year as Making Catholic America: Religious Nationalism in the Gilded Age and Progressive Era (Cornell University Press).

Entering the term anti-Catholic into the same catalog gives 154 entries, while anti-Protestant produces 25. But even that disparity masks the gulf in very contemporary studies. In the past decade, the only entry under “anti-Protestant” is a chapter on the anti-Protestant novel in Eileen P. Sullivan, The Shamrock And The Cross: Irish American Novelists Shape American Catholicism (University of Notre Dame Press, 2016). It is an excellent piece of scholarship, but oh my, it stands in splendid isolation. In contrast, the past decade alone produces 34 entries under “anti-Catholic.”

You very feasibly could put together a lively program on Anti-Catholic Studies in a Religion or History department, whereas anti-Protestantism scarcely exists as a topic. In fairness, Wikipedia does have a valuable entry on Anti-Protestantism, but the bibliography is strictly limited.

Luther as the Antichrist

That is multiply unfortunate. When studying Christian history, it always pays to recall that at all points since the Reformation, Catholics have always constituted a sizable majority of Christian believers worldwide, and prior to 1800 or so, that dominance was much larger. What those Catholics believed and taught must always represent a major share of what we classify under the rubric of “Christian history,” and that includes in matters of prejudice, and even bigotry.

One useful piece on all this is by the distinguished German historian Olaf Blaschke, on “Anti-Protestantism and Anti-Catholicism In The 19th Century: A Comparison,” in Yvonne Maria Werner and Jonas Harvard, eds., European Anti-Catholicism in a Comparative and Transnational Perspective (Brill, 2013) 115–134. As Blaschke writes,

Note, by the way, what happens here. The book itself, like countless counterparts, concerns anti-Catholicism, and that provides an opportunity to sneak in what almost seems like a contrarian or token piece on this strange beast called “anti-Protestantism.” To say the least, the theme is consigned to the margins. Exactly the same thing happens with another important recent essay, by Valentine Zuber, on “Through the French Looking Glass: Antisemitism, Anti-Protestantism, and Anticlericalism: A Study in Doctrines of Hatred at The Turn of the Twentieth Century,” in Claire Gheeraert-Graffeuille and Geraldine Vaughan eds., Anti-Catholicism in Britain and Ireland, 1600–2000: Practices, Representations and Ideas (Palgrave Macmillan, 2020). Again, to find material on anti-Protestantism, you have to dig in the literature on anti-Catholicism.

Blaschke and Zuber are studying European matters, but this is also a monstrous gap in American religious history: why, indeed, has the narrative of anti-Protestantism not been told here yet?

So maybe, Catholics through the centuries were so filled with Christian charity that they never denounced or demonized Protestants? Were they always turning the other cheek? Um, no, not at all. Neither side ceded ground to the other in such matters.

As with anti-Catholicism, the term anti-Protestantism should be defined with some care. It is not anti-Protestant to argue against the assumptions and doctrines of that stance, to point to worldly failings of Protestants and their churches, past and present. Where it shades into prejudice is when the critique generates many myths and stereotypes, which take the place of rational argument. Often, again as with anti-Catholic rhetoric, the enemy is framed in a cosmic or supernatural way, and associated with familiar imagery of evil, generally taken from apocalyptic tradition. And from a very early historical stage, that is certainly what happened with attacks on Protestants. Anti-Protestants, like their anti-Catholic counterparts, drew on a wide repertoire of Biblical and Patristic lore, accusing Protestants of being inspired by Satanic forces, and serving the Antichrist. Anti-Protestants had their own body of legends about the misdeeds of the foe in slaughtering and martyring true Christians.

Anti-Protestantism also delved deep into conspiracy theory, with an overwhelming focus on Masonic plotting, and a lively dose of anti-Semitism. The Masonic theme is unavoidable at any stage, but it reached fever pitch following the French Dreyfus affair of the 1890s, the era of alleged “Judaeo-Protestantism.” One notable book on that era is Jean Baubérot and Valentine Zuber, Une haine oubliée: L’antiprotestantisme avant le pacte laïque (1870-1905) (Paris, Albin Michel, 2000), from which I steal the title of the present post, “A forgotten hatred.” Catholics also made much use of a slippery slope argument, claiming that Protestantism inevitably led to secularism and atheism. 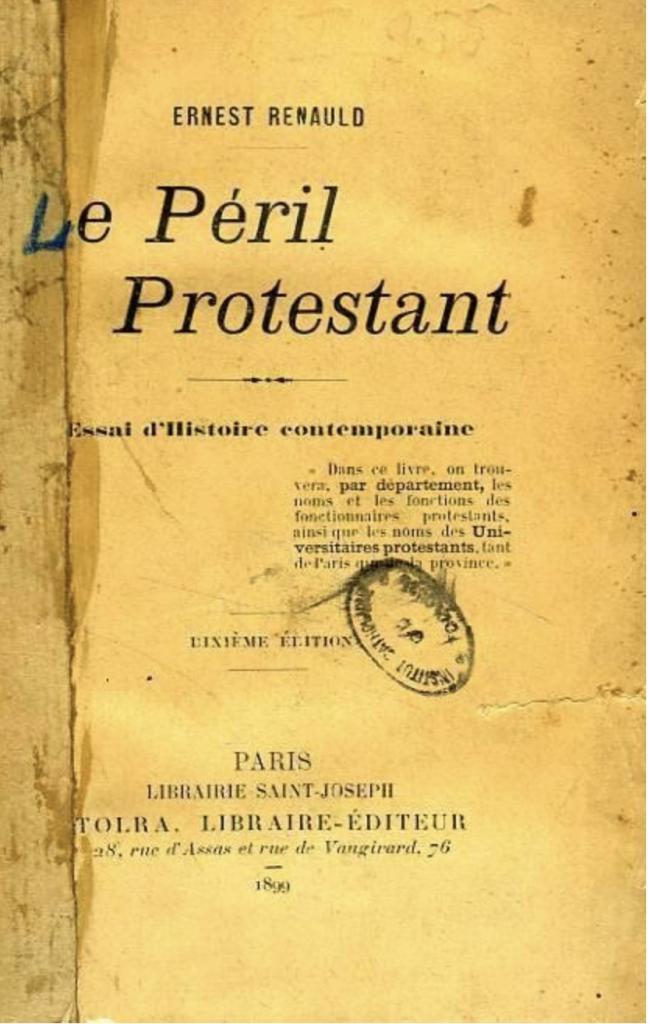 Specifically, what about the US? I quote from Mark Noll’s account of the reaction of one leading Catholic source to the imminent end of the Civil War:

Rather than synthesizing civic and Christian jubilation, this Catholic newspaper answered its own question, “Who Are the Loyal Citizens?” with an all-out attack on the nation’s Protestants. After detailing errors of belief and practice in various Protestant churches, the Tablet closed with a denunciation that borrowed invective from northern political polemics: “Aggressive Protestantism is essentially rebellious, … its origin is the spirit of secession and revolt, … its history is but a chronicle of insurrection, and…, in short, sedition and mutiny are but fruits of the Lutheran leaven spreading under the specious name of Liberty and Independence into all the ramifications of political, social and domestic life.”

Mark’s article bears the intriguing title, “The Catholic Press, the Bible, and Protestant Responsibility for the Civil War.”

From their extensive European contacts – in Italy as well as France – American clergy were thoroughly immersed in such ideas, which they imported freely. Irish clergy at all levels were very open to any rhetoric that exposed the oppressive horrors of Protestant/Masonic England. At any point over the past 150 years, such ideas were regularly presented to that quarter or so of the US population that happened to be Catholic.

The materials available  for research in this area – in sermons, tracts, and diocesan publications – are very substantial. So is visual evidence, in cartoons and handbills. As in so much else, we can learn a great deal about the attitudes and perceptions of ordinary working class Catholics from the Studs Lonigan trilogy written by James T. Farrell in the 1930s. Although the work is of course fiction, Farrell precisely catches the prejudices and obsessions of the people he describes, especially the clergy, about the evils of Protestants, Masons, and other feared outsiders. European sources are even more sizable.

Like so much else in Christian history, anti-Protestantism also has a substantial global dimension, especially in Latin America, and I know of a decent literature concerning the churches of Mexico and Brazil.

In this short blog post, I do not seek to offer any kind of comprehensive guide to such resources, but the time to study them is long overdue. Major books remain to be written.

October 5, 2022
Liberation Theology for White People: The Preferential Option for Moore
Next Post

October 7, 2022 Royalty Chic and the Upside Down Kingdom
Recent Comments
0 | Leave a Comment
"Good point!"
mmcguire001 Advent: The Most Apocalyptic Time of ..."
"Always appreciated the tension of Advent. Fleming Rutledge is, in my opinion, one of the ..."
mmcguire001 Advent: The Most Apocalyptic Time of ..."
"Hey Mike, The political Religious Right must cut huge sections out of their Bible in ..."
Artistree Ron Sider and the Fate of ..."
"I think people are being very thin skinned about an opinion of one person. But ..."
Roger McKinney A Panopticon for a Ruling Class ..."
Browse Our Archives
Related posts from Anxious Bench