Heroes, in the biblical tradition, are not heroic.

There’s just no way of getting around it.  Heroes are like shepherds who rescue a lost sheep.  You can carry on all you want about the unwisdom of chasing after lost lambs, the reckless leaving of the flock, and the large heartedness involved here, but, though classic heroes do rush in where angels fear to tread, you just can’t make the reckless shepherd into a figure of valor, noble action, battle beauty, and glorious victory. 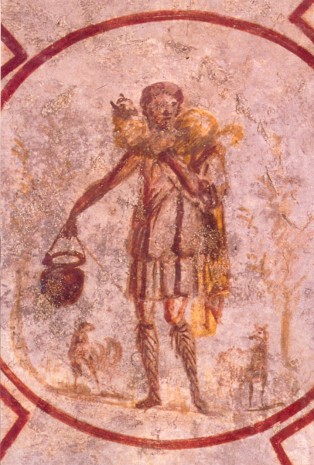 The Lord is my shepherd, according to the 23rd Psalm, and this image of God is cast with a care and devotion that extends to Jesus, born in the presence of shepherds  and growing into the Good Shepherd of the world.

It’s easy to undervalue the image.   Israel’s long history of living as semi-nomadic herders made sheep central to their economy, and so the image of God as shepherd is a reasonable one.  But dependence on herds was also huge in much of Europe, yet the Roman pantheon of Gods leaned toward warriors, and their warrior gods dominated their empire.  And the Celtic pantheon, which filled the religious imagination of Greece, Spain, France and the British Isles, extolled the warrior to such a degree that the chief of all gods, Lugh or Lleu, was known for his magical spear, his legendary sword, chariot and horse, and his many warring adventures. 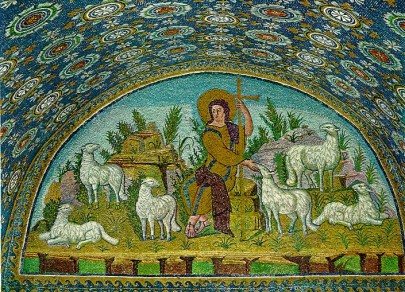 At the start, there was Abel, the beloved and eternally innocent son, whose offering of a sheep pleased God deeply and whose blood and purity are part of our souls forever. 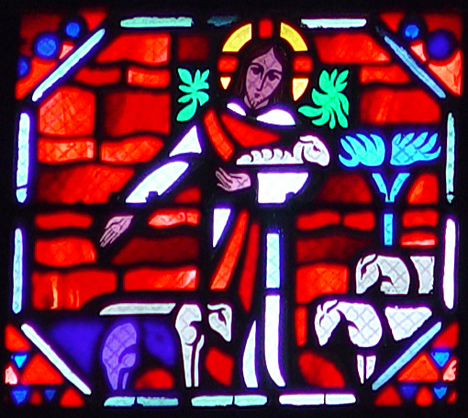 Noah, the Shepherd Archetype, herded all God’s creatures safely to the New Earth, then got drunk and lay around naked and besotted, God’s beloved who is remembered forever for his great deed-doing, but never seen as a divine hero.

And then there was Abraham, a nomadic herder to whom, despite his erring ways, God gave the promise of offspring numbering more than the stars.

Abraham’s twin grandsons, Esau and Jacob, begin adult life as shepherd and cook; and Jacob the cook was a bad guy, while Esau the herder was  beloved;  but in exile Jacob became a shepherd of reknown, and in that new identity Jacob received God’s particular blessing.

In the era of the kings, David, the greatest King, was a shepherd boy who wrote love songs to God, and all his older, stronger, more handsome brothers were passed over for the kingship till God’s eye fell on this young shepherd.  God’s heart was smitten.

urning the pages to the New Testament, lo!  here are shepherds in the stable, viewing the Christ Child – shepherds, who received an invitation to see the Babe from the entire heavenly chorus.  Only shepherds were invited, no one else.  And this is the first time in the biblical record that angels sang to people — and it is shepherds to whom they sing.

John’s gospel names Jesus the Lamb of God, and also describes him as the Gate and the Gatekeeper to the sheepfold, and most powerfully, as the Good Shepherd.  But now the name Shepherd has become symbolic, for Jesus’ trade was carpentry, and perhaps he fished a time or two, but he spent no time among the sheep.  And the sheep are also symbolic, the sheep are the people of God.

And now there is a distinction between shepherds.  Before John’s gospel, there have been no bad shepherds.  The various villains were mainly kings but also some queens, prophets of Baal, drunken sots, court betrayers.  John adds a shadow to the shepherd image.  Good shepherd, bad shepherd, there are to be distinctions. 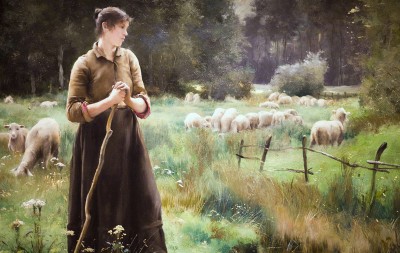 But John does not point to other religious figures, other prophets of Israel, or even foreign gods, as the bad shepherds.  Those who desert the people in times of trouble are the same evildoers the people have known of old, corrupt politicians, wicked kings, religious fakirs:  Pilate, Herod, and Caesar.  They usurp the role of shepherd, leading the people into places and times which are snares, and they abandon the people to face falling fortunes helplessly.

April 27, 2015 Fruitful
Recent Comments
4 Comments | Leave a Comment
"Yes, he was Minority leader at the time, not Speaker. Thank you."
Martin W. Eldred It’s Pentecost – and Something Is ..."
"Conventional religion doesn't give Mary nearly enough attention; nor Ruth, nor Elizabeth, nor the Saints ..."
Emily Elizabeth Windsor-Cragg No More Lying About Mary
"Nancy - what happened to you? You've all but disappeared?"
Pat Pickett Easter and the Bandit Shepherd
"There is more than one way to interpret the writings of the Bible, just because ..."
Mary-Anne Lomas No More Lying About Mary
Browse Our Archives
get the latest from
Progressive Christian
Sign up for our newsletter
POPULAR AT PATHEOS Progressive Christian
1