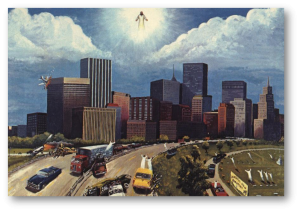 It is no secret that the United States has repeatedly cut NASA’s budget for a plethora of reasons, but there are those in congress who think the government is wasting money in other forms of scientific endeavors. This is obviously true, but some use religious reasoning to justify their aims.

Remember when Rep. John Shimkus, during a 2009 hearing of the U.S. House Subcommittee on Energy and Environment, said that it would only be God who would decide how the world would end? Here’s the video:

Similarly, and much more recently, Rep. Joe Barton argued that the Biblical “Great Flood” was evidence that climate change was not man made at a meeting of the House Subcommittee on Energy and Power.

I have to wonder how many of these individuals would agree with Jesus that “man shall not live by bread alone, but by every word that proceedeth out of the mouth of God” (Matthew 4:4)? And if they do, how far would they go to change the laws on the books? How much would their belief systems effect how they distribute taxpayer’s money?

Think about it. Don’t you think we should be concerned if a leader of the free world believes that by pushing a single button, they could bring Jesus back? How many of them see the chaos of the Middle East as a good thing? Shouldn’t, at the very least, while respecting the rights to hold a religious beliefs, we demand clarification from those who occupy positions of public authority?

If we continue to remain silent, how far would they take it? And how much further would the next generation go? How about the next one? Get the point?

I don’t believe it is far-fetched to be concerned of such things. Need I remind you that there was an age in history known as the “Islamic Golden Age” (ca. 750-1250 CE). During this time, the scientific method was paramount and mathematics, medicine, biology, and physics grew in the Islamic world beyond what the Greeks and Romans could not have imagined. That is until the teachings of Abu Hamid al-Ghazali began to dominate the Islamic world.

Instead of keeping you much longer, I’ll leave you with a video of Neil deGrasse Tyson commenting on al-Ghazali’s influence:

In our willingness to keep peace, we may decide that it is harmless to give up small plots of land, but if history has shown us anything, we should know that these appeasements have the capacity to become mighty beachheads of destruction.

The sky might not be falling, but perhaps we have cause to look up.

*A few have expressed concern that I was exaggerating my “End Times” claims. So, I have written a follow-up article here: The Last Days: Recent Proof That the End Is Nigh!

April 12, 2015 Tim Ferriss Interviews Glenn Beck and Sets an Example
Recent Comments
0 | Leave a Comment
Browse Our Archives
get the latest from
Nonreligious
Sign up for our newsletter
POPULAR AT PATHEOS Nonreligious
1