The ‘reason’ for celebrating Easter as an atheist

The ‘reason’ for celebrating Easter as an atheist April 5, 2015 Richard Haynes 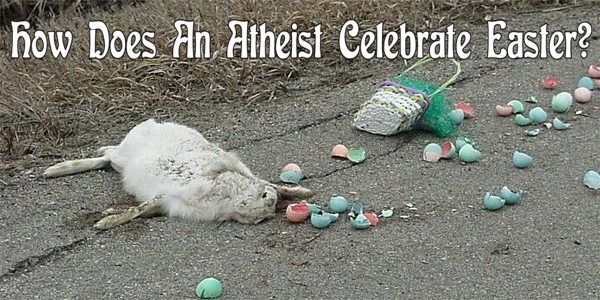 The Daily Beast’s Steve Neumann, asks this morning: “Do You Really Need Jesus for Easter?”

I have struggled with this question ever since my wife and I threw off the shackles of religion. Not because we were torn about celebrating with our children, we proudly do so, but because so many nonbelievers have a problem with us doing so. I like the way Neumann puts it:

“Admit it—you’re probably thinking that we nonbelievers wake up late on Easter Sunday, keep the shades drawn all day, and drink bitter black coffee while we sit around and recite sections of The God Delusion or The End of Faith. And maybe throw eggs at passersby on their way to church.”

It seems that it isn’t only believers who feel this way. Many atheists will go out of their way to ridicule Easter today. If you doubt this, log into Facebook and see how many “Zombie Jesus” references you find. (Go on do it; it could be like our own specialized egg hunt!)

Don’t get me wrong, I get a chuckle from these things as well. I just try not to be a dick about it. When I do it, I like to include a reference to Matthew 27:50-53. In the passage, once Jesus dies, and before he is resurrected, there are many others who become the “walking dead:”

“Jesus, when he had cried again with a loud voice, yielded up the ghost.

And, behold, the veil of the temple was rent in twain from the top to the bottom; and the earth did quake, and the rocks rent;

And the graves were opened; and many bodies of the saints which slept arose,

And came out of the graves after his resurrection, and went into the holy city, and appeared unto many.”

Disclaimers aside, my wife and I woke up early this morning and sat out Easter baskets for our daughters, and they are freaking 22 and 17! Why would we do this? For the same reason we still have them put milk and cookies out for Santa Claus. Because we love the holidays!

A few years back, I happened to be sitting in a hotel bar on Easter with a prominent atheist most of you would know. He was chewing me out because while we sat there, at home in Atlanta, families from my local group were meeting in a park where the kids were hunting eggs, getting their faces painted, and petting bunnies. There was no mention of Jesus, or Easter per say, the kids were just having fun and building memories. He was disgusted.

My friend’s complaint was that we were giving validity to the Christian religion. My argument was that all of these holidays are pagan, so who cares. Why can’t we make Easter whatever we want?

Neumann says he celebrates Easter as a time for increasing his “understanding of and appreciation for a naturalistic account of the universe.” He says that it is exactly “what the Easter Bunny ordered.” He contends that Easter is about the return of spring, and a time to break through the “virtual reality cocoon that increasingly surrounds us.” A moment when we all can do as Ralph Waldo Emerson suggested an renew our “relationship with nature.”

Further, Neumann reminds us that his “patron saint of renewal” Friedrich Nietzsche, wrote about the concept of “eternal recurrence.” A notion that suggests that we humans should not mold our lives on anything eternal, but we should fashion them in a way that we would not be opposed to them being repeated eternally. As difficult as this may be, Neumann says that by attempting to do so, atheists can “gain everything a Christian Easter” has to offer in the present. For atheists, “redemption is a lifelong, daily project, an intentional commitment to making life new every day.” If we have the right mindset, “every day can be an Easter of renewal.”

So, if you have kids, let them have fun. You don’t have to sell them “Santa” or the “Easter Bunny,” but you can build family traditions. With all the negative experiences I had with religion, and with all the literal hell I went through with my family growing up, I still have a handful of holiday memories that make me smile. Atheist kids need these as much as religious ones do. Why is it so hard for some of us to get that?

Heck, why don’t you use the holiday to educate your children about the history of these traditions? You can do so without focusing on all the negative. Discuss with them why we focus on bunnies and eggs. Teach them why Easter is determined by the cycles of the moon. Ask them to ponder and explain why they believe Easter occurs at the beginning of spring. For the older kids, you could read the Bible story, and then compare and contrast it with the “The Descent of Inanna” (many scholars believe Easter’s origins sprung from it).

April 2, 2015
Indiana's 'Religious Freedom' Law and The First Church of Cannabis
Next Post