They Were Not Able to Separate the Soul From the Flesh

They Were Not Able to Separate the Soul From the Flesh September 12, 2014 Artur Rosman

Finishing Theology of Transformation was one of those bittersweet reading moments: I was happy to discover the work of Oliver Davies, but sad the book ended.

I’ve already explored his discussions of what he calls the Second Scientific Revolution, the way it helps to locate Christ in our cosmos in a new way, and how it helps to put some flesh back into our theologies (I’ll have more to say about his work soon).

Reading Davies led me into posts about the shockingly fleshy heart of faith here and here. My readers tell me the post on Christ’s genitalia even helped them shed some social network friends. See, with God all things work together for the good!

Now thinking in poems is something I’ve always done. Poetry frequently lends words to connections I’ve considered, but never figured out how to conceptualize. Frequently recalling a poem has helped my thinking move forward when I lack my own words.

This was the case today when it came to connecting my discussions of Davies closer to my intentionally provocative earlier thoughts on the (dis)embodied modern soul.

The following poem from Zbigniew Herbert–a Polish poet who was Czeslaw Milosz’s main rival poetic rival–gets to the heart of the matter. The poem works on two levels. It ironically a) criticizes the dehumanizing labor conditions of Poland in the 1980’s by  b) describing them in terms of a disembodied heaven–the sort of heaven you might expect modern Docetists to imagine.

Nobody ever said political commentary has to be unpoetic and humorless!

Report From Paradise
by Zbigniew Herbert

At first it was to have been different
luminous circles choirs and degrees of abstraction
but they were not able to separate exactly
the soul from the flesh and so it would come here
with a drop of fat a thread of muscle
it was necessary to face the consequences
to mix a grain of the absolute with a grain of clay
one more departure from doctrine the last departure
only John foresaw it: you will be resurrected in the flesh

How brilliant is Herbert’s observation on the Gospel of John?!

Herbert was the winner of the T.S. Eliot Prize, numerous other international literary prizes, and, in the opinion of most Poles, more deserving of the Nobel than Wislawa Szymborska. There’s no better way to dive into his poetry than The Collected Poems, because once you get going, you want to read all of his poems. His prose is also well-worth your time, especially his offbeat account of traveling from then communist Poland to see the masterpieces Western Europe, Barbarian in the Garden, and his riveting essays on Dutch painting (and the tulip fever) Still Life with a Bridle. Of course, you can get both of these, and several other collections, at a reasonable price in his Collected Prose.

On the other hand, if you fancy exploring the latest discussions of the theology of heaven (and hell), then head to my TOP10 list on that very topic here.

There’s also this video of Seamus Heaney remembering Herbert (a.k.a. The Other Herbert) and reading his poetry to pique your interest: 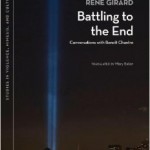 September 14, 2014 The Empire Strikes Back: Feast of the Holy Cross
Recent Comments
0 | Leave a Comment
Browse Our Archives
get the latest from
Cosmos The In Lost
Sign up for our newsletter
POPULAR AT PATHEOS Catholic
1