The Holocaust is inextricably tied to memory through maxims such as: Emil Fackenheim‘s “Never forget” and George Santayana‘s “Those who cannot remember the past are condemned to repeat it.”

However, historical memory is fickle and influenced by present exigencies.

Below you will find 5 facts generally not remembered about the Holocaust:

1. The Holocaust is not some metaphysically necessary event that dropped into the lap of history: The drive toward the total extermination of the Jews was contingent upon many historical events. The Slavs were designated for extermination first.

2. The Holocaust is not unprecedented in European history: It was preceded by the French Revolution’s genocide in the Vendee, Turkey’s extermination of the Armenians, and the mass starvation of the Ukrainians by the Soviets. We should also not forget the legacy of 19th century colonialism, that is, King Leopold’s genocide in the Congo, the German Kaiser’s Holocaust, the Irish Potato Famine, and the American genocide (just in case you’re tempted to think that this is an exclusively European disease). What’s more, World War II was immediately followed by the ethnic cleansing of Germans in what is now Western Poland.

3. History is not even past: interpretations of the the Holocaust are not only alive in Israeli politics, but also political debates in/about Poland, Germany, Russia and Ukraine, and even American capitalism.

4. The Holocaust discovered during the liberation of Auschwitz: Western governments knew about the extermination of the Jews thanks to the heroic efforts of the Polish underground. Home Army members such as Alfred Karski and Witold Pilecki risked their lives (the latter broke into Auschwitz) to give eyewitness accounts to the West. They did, but nobody listened.

5. Auschwitz was not built expressly for the extermination of Jews: The Polish Catholic clergy was one of the first groups targeted for extermination along with Polish intelligentsia and officers (the communists were targeted a little later). This is why Maximilian Kolbe’s martyrdom is a trace of the Nazis’ plan to exterminate the Slavs first.

For more on Snyder’s groundbreaking book see the post “Holocaust in Context.”

You might also be interested in reading about the one thing almost nobody noticed about Foreign Film Oscar winner Ida. 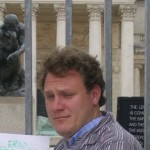 January 27, 2015
Why Study Philosophy as a Spiritual Exercise?
Next Post

January 29, 2015 How is Aquinas so Premodern That He's Postmodern?
Recent Comments
0 | Leave a Comment
Browse Our Archives
Related posts from Cosmos The In Lost