But what happens if people democratically pick a bad robot?

So, this is the danger of even thinking this way. Because it’s possible that you could get a robot that might become selfish during its term as president. Or it could be hacked, you know? The hacking could be the number one worry that everyone would have with an artificial intelligence leading the country. But, it could also do something crazy, like malfunction, and maybe we wouldn’t even know if it’s necessarily malfunctioning. This happens all the time in people. But the problem is, that far into the future, it wouldn’t be just one entity that’s closed off into some sort of computer that would be walking around. At that stage, an artificial intelligence that is leading the nation would be totally interconnected with all other machines. That presents another situation, because, potentially, it could just take over everything.

That said, though, let’s say we had an on-and-off switch. This is what I have advocated for–a kind of really, really powerful on-and-off switch for any kind of A.I., because I don’t necessarily think we should release A.I. without a guaranteed on-and-off switch. For me, the greater prospect of an artificial intelligence one day leading countries is that we’re also going to be interconnected to them. Within 15 or 20 years, we’ll have cranial implant technology for mindwave-reading headsets that are so advanced that we’ll probably be directly interconnected–our thoughts, our minds, our memories–into these types of artificial entities. And at that point, I think the decision-making would be a dual-process where we would essentially have ourselves tied into artificial intelligence, but we still remain biological thinking creatures. And the artificial intelligences would help us make good decisions. You would always have something overlooking your moral systems. And that thing overlooking you would say, Hey, don’t hurt other people. Don’t hurt things that you love and don’t do things that are against the greater good of society.

Touching. The possibility of calming down mad robots designed to control us sounds as effective as yelling a toddler to calm down when it is having a tantrum.

As you can see, the plot of The Possibility of an Island isn’t farfetched at all. As Einstein once reportedly said:

If at first the idea is not absurd, then there is no hope for it.

This is why Houellebecq is so relevant for our moment. Transhumanism is not the sole target of the controversial French novelist. In the The Map and the Territory  Houllebecq savages the myths of the art market and capitalism; in The Elementary Particles the sexual and genetic revolutions hit a wall; and in his forthcoming Submission (arrives this October) he demythologizes secularism. He is the historian of our future. Take a look if you dare.

Needless to say Houellebecq’s vision of modernity is much closer to Francis than to Damon Linker who in his latest piece builds a modern case against Laudato Si’. Modernity has always built such cases for itself–chimerical salvations from salvation. I’d instead bet on the original offer of salvation as we TRANSition into the coming darkly comic ages (Houllebecq is their prophet).

In the meantime: Consider the rosy possibility of saving the world with robots that you’ll then have to save yourself from. That, not secular salvation, is an apposite metaphor for modernity.

I’m sure to be left behind as the transhumanist-capitalist revolution takes flight. I mean, I can’t even pay rent right now. And I’m probably about to be replaced by robots who’ll write these posts instead. You can help stave off this inevitability for a while through the paypal button on the right side of my homepage.

June 24, 2015
A Pixellated-Camouflage Bible for the Deus Absconditus in Your Life!
Next Post 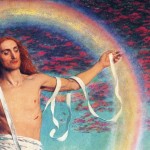