Patheos Explore the world's faith through different perspectives on religion and spirituality! Patheos has the views of the prevalent religions and spiritualities of the world.
The second half of Jody Bottum’s Age of Anxiety makes a strong case for the American internalization of Catholic natural law language. One of the goals of his book is to point out the heavy Catholic presence in American public life through the public square’s adoption of this typically Catholic way of speaking.

This exegesis of a kind of esoteric writing does get a little bit farcical when Bottum takes up an extended reading of George W. Bush’s statement that Jesus Christ is his favorite philosopher. This involves the reading of Bush’s second inaugural as packed with Catholic natural law language.

All too briefly I’ll summarize the argument like this: If natural law is written into that inaugural, and natural law is Catholic esoteric writing, and Catholics are members of the Christ’s Church, then that’s why Bush can say that Jesus is his favorite political philosopher.

There might be something to it, even though I think Bottum imputes too much intellectual dignity to Bush’s speechwriters and Bush’s intellectual agenda.

But then the Slate article “Dignity” Could Be Dangerous at the Supreme Court by Katherine Franke made me do a double-take:

Supreme Court watchers have their money on same-sex couples winning a right to marry when the court rules in Obergefell v. Hodges. But the harder question is: How will the court get there? What constitutional right, exactly, is violated when same-sex couples are denied the opportunity to marry? The answer to this question matters, especially for women and reproductive rights. The expansion of rights for one group might result in the contraction of rights for others, leaving an ignoble stain on an otherwise significant win for queer people.

Where does the ignoble stain come from according to the author of Wedlocked: The Perils of Marriage Equality? It comes from Justice Anthony Kennedy’s majority opinion using Catholic natural law “human dignity” language (she does not come out and say it, but it’s there):

It’s hard to come out as an opponent of dignity, but in this case I must. In this political and legal climate the cost of dignifying same-sex relationships risks shaming women exercising reproductive rights. I’m not willing to win marriage rights for same-sex couples in a way that might contract the noble promises of our Constitution. We should have more expansive expectations of what it means to win.

Kennedy, of course, is a Catholic appointee from the Reagan administration. Therefore, it doesn’t seem too far-fetched that he would fall back on Catholic natural law discourse (whether he did it consciously or not is irrelevant) when writing the majority opinion.

After all, Andrew Sullivan also leaned heavily on Catholic theological culture when he first mainstreamed the idea of gay marriage.

As Milosz once said in his collection Second Space:

Alas, an American saying has applied to me, though it was not coined with kindly intent:
‘Once a Catholic, always a Catholic.’

Perhaps the Age of Anxiety is on target with its meditation on Jesus Christ (Philosopher) and his influence over the Republican party? Wouldn’t that be a queer Catholic encroachment on the wall of separation?

Could it also be an opening for prenatal rights?

You might also want to take a look at why Zizek thinks there is nothing more perverse than faithful straight marriage and why after the SCOTUS decision gays (as a group) are no longer morally superior to Christians (as a group).

Rent time is right around the corner and we’ve followed the Catholic anti-capitalist logic of having multiple kids before we’re economically viable. Please help out by continuing your generous donations through the PayPal donate button on the right side of my homepage (scroll down a bit). 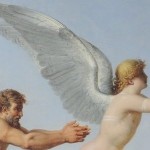 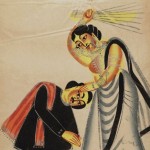 June 29, 2015 Difference, Disharmony, and Drama Are the Essence of Marriage
Recent Comments
0 | Leave a Comment
Browse Our Archives
Related posts from Cosmos The In Lost