On Noses and the Incarnation

On Noses and the Incarnation December 2, 2015 Guest Contributor

“For the Son of God became man so that we might become God.”
–St. Athanasius of Alexandria, On the Incarnation

Have you ever thought much about noses, and how weird we might look without them? Noses, in a sense, follow from having a human being in front of you. Case in point: Voldemort does not have a nose. Whatever he might have once been, after fracturing his soul seven times and having a metaphysical crisis, he certainly isn’t human. In hiding himself, he lost his nose and much of his what-is-it-ness. Now, not everyone has a nose and for many around the world, such a loss has more to do with politics than metaphysics, but unlike Voldemort, such individuals would probably take their nose back if they could. Noses are part of what it means to have a body: if you can find a human being, it’s reasonable to suppose you will be able to find their nose.

Being human means having a body. Incarnation, a very important word to Catholics and Christians of all stripes, is generally agreed to be the word we use to sum the idea “the Word became flesh and pitched His tent among us.” And who doesn’t like the result? A baby in a manger, who is God, and also presents and cookies and celebrations? And yet, as Romanus Cessario, O.P., noted, “the union of the Word of God to a human soul and flesh constitutes at once the wonder and scandal of the incarnation.” As we enter Advent season, it is so easy to get lost in the wonder, to give ourselves over to candles and cries of veni, veni. Come, come.

Yet, it is worth dwelling on the scandal, or else we risk forgetting the wondrous amazement of the phrase “God became Man.” What causes the scandal is the reality of what being human in all its particular messiness means. This claim that God absolutely, truly, really, messily became man caused many to seek another understanding, and so they ran to the earliest christological heresies. Cessario explains that these heretics “judged it unfitting that God, the supreme uncreated spirit, should find compatibility with a material body which remains as [seemingly] distant from him as wickedness from supreme goodness.”

What is important is to realize that such a position is not unreasonable, and in fact makes a lot of sense. After all, Jesus as a cherub-faced infant at Mary’s breast is a lovely image and easy to consider. But what about the notion of a member of the Blessed Trinity, one God in three Divine Persons, soiling His diapers or spitting up?

The apparent scandal has little to do with the Christmas Card Child, and far more to do with the living, breathing, eating, and thus waste eliminating Child. This scandal ultimately extends throughout His entire ministry, and forces us to wonder: what does it mean for God to die? What does it mean for the Logos to undergo a crucifixion in all the bodily agony such torture causes, to have the human nature he assumed break under the weight of our sins? What are we to say of a God Who loved us enough to undergo the (likely) humiliation of not only emptying out His tears and blood, but His bladder as well?

St. Thomas Aquinas argues in his Summa Theologiae that Christ assumed the “disabilities” or “deficits” that are shared by all men when He assumed human nature, namely “death, hunger, thirst, and the like,” the deficits that Damascene calls “the natural and unembarrassing afflictions.” Despite using the word unembarrassing, we must certainly say that there are many things that are both natural, not rooted in vice in anyway, and nevertheless embarrassing about being human. Artur Rosman wrote about this topic as relating to Christ’s genitalia a while back, referencing the Franciscan motto of “nudus nudum Christum sequi,” or “follow naked the naked Christ.” Perhaps the focus or notion of Christ being a man in a non-neutered sense is scandalizing, but it seems that this sense of scandal might be misplaced.

St. John Paul II taught in his Theology of the Body, very much within the tradition of thinkers like Aquinas, that “the body, as the expression of the person, was the first sign of the presence of man in the visible world.” The former Holy Father went on to write that when it comes to the shame we associate with nakedness, it is due to “a specific fracture of the personal integrity of his own body, particularly in that which determines its sexuality and which is directly linked with the call to that unity in which man and woman ‘will be one flesh.'” Thus, a nude Christ, or nude saints in the Sistine Chapel, cause us to flush and avert our eyes, because we ourselves still bear the fracture of personal integrity within our own bodies. Christ was never fractured in that way, and so His Body would not react in any unseemly way. The Saints in Heaven are currently without bodies, but after the Resurrection they will no longer need clothing to cover their shame; the fracture of their personal integrity has been healed by the wounds borne in Christ’s flesh.

Christ assumed the gritty, messy reality of human nature; nevertheless, His “being human” is analogous to our “being human,” not identical. Because words like analogy, to a certain sector of academics, are “fightin’ words,” I will only say that an analogy is neither univocal speech (calling Rover and Fido both dogs) nor equivocal speech (that I can hit a bat, a flying mammal, with a bat, an aluminum stick, is merely linguistic chance). Analogy, instead, indicates that there is something sort of/kind of/somewhat the same in how both parties are being human, and yet, their respective being human is in another sense very, very different. After all, it requires being God to become Man as God has. God became Man to be Man in such a way that His suffering could bring about the salvation of all other humans.

To save us, the Word became Flesh. What remarkable, astonishing words. In some way this is the speech of comedy, if we understand comedy in the sense of comedia, or a story with a happy ending. But it is also the speech of comedy, taken in the loose sense of laughter. The two honest responses to the notion that “God is with us” are either descending into weep or collapsing into bellyaching laughs, and to do both with utterly sacred joy.

So this season, seek contemplation by seeking Christ’s nose. When you do find His nose, remember to not be scandalized by the ramifications of His being human. Instead, in each of those effects and affects of the true human nature He assumed, in all their real, messy, temporal being-ness, hear the truth proclaimed: Ecce Homo. Behold, the Man.

Marina Olson has been a lot of things including a writer, researcher, journalist, student, bridesmaid, event planner, editor, climber, and a runner. She wanted to include an analogy that would tell you more about herself, but sometimes finding the right analogy is as hard as- as hard as- well, regardless. She obtained her BA in Liberal Arts from Thomas Aquinas College and her MA in Theology from Ave Maria University. She is currently working on completing her English teaching credential while also student teaching.

You might also consider reading Gogol’s classic novella, The Nose. 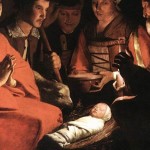 December 1, 2015
Advent and the Pointlessness of God
Next Post 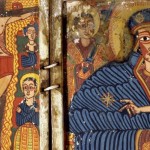 December 3, 2015 The Discovery of God: God IS Dead? Long Live God!
Recent Comments
0 | Leave a Comment
Browse Our Archives
get the latest updates from
Cosmos The In Lost
and the Patheos
Catholic
Channel
POPULAR AT PATHEOS Catholic
1