I exhort you — be zealous to do all things in harmony with God, with the bishop presiding in the place of God, and the presbyters in the place of the Council of the Apostles, and the deacons, who are most dear to me, entrusted with the service of Jesus Christ, who was from eternity with the Father and was made manifest at the end of time. Be all in conformity with God, and respect one another, and let no man judge his neighbour according to the flesh, but in everything love one another in Jesus Christ. Let there be nothing in you which can divide you, but be united with the bishop and with those who preside over you as an example and lesson of immortality.

–St. Ignatius of Antioch, Letter to the Magnesians

Last Thursday, Steve Skojec made an entry on the 1P5 blog that came to my attention Sunday morning. It is entitled “Angry, Sick, and Beyond Fed Up” [There you go Steve, we’ll magnanimously give you hits…].

It certainly lives up to its title, bearing out that its author is, without a doubt, every bit of those three things. Here are my thoughts on most of the bile he had to spray within that piece.

“But I can’t stop being angry.”

That, of course, is the essential problem here. Ignorance leads to a lack of comprehension, which, in the face of complex situations, snowballs into blind rage, and the kind of limbic tantrum this article exemplifies.

“Every day there is an endless parade of stupidity, malice, debauchery, and violence that assaults our senses and steals our peace.”

His peace, naturally, has been stolen, not forfeited. It’s wholly the fault of others that he feels as he does, rather than his own for indulging in rageaholic rants such as this. Alas, the other is always at fault for mucking up the fine time of the unquestionably righteous. Skojec could recognize that he’s in no position to practically affect the things he so frets with froth of mouth about throughout this article, and simmer down a bit upon taking a realistic appraisal of his position. He could also open himself more fully to the peace afforded by Christ, Who has overcome the world, and suffers in solidarity with victims of hatred and injustice, whether they be those at the receiving end of Skojec’s words, or ISIS’ bullets. He could find solace in the truths expressed through the teachings of the Church, and the guidance of the living magisterium that interprets those teachings (we’ll see why that doesn’t work later on). Nevertheless, Skojec finds the easiest course of action to be the best: Give in to anger, and lash out in blame, like an irate monkey making petulant use of the meal he consumed the day before.

“Because every time I get near a computer I don’t know what to say.”

Well, at least that’s an honest statement, and one that the rest of this article certainly bears out. I suppose his mother never informed him during childhood that the better course of action under such circumstances, and the surest way to avoid saying something stupid, is to say nothing at all.

“I’m sick to death with what is happening in the Church and the world. I’m overwhelmed with the feeling of futility in attempting to fight it.”

As the targets of Skojec’s bigotry might say: Alhamdulillah! That he is beginning to realize the futility of his efforts is as welcome an admission as a toddler saying they’re getting tired.

“We deal mostly in these pages with the attacks coming from within the Church.”

Having perused the pages of the 1P5 blog, I suppose that by this he means they trade mostly in attacking the Church from within.

“And believe me, I’m more than at my limit with theological terrorism – which is exactly what is being perpetrated by our pope and his cadre of destroyers.”

Yeah, that’s definitely what he meant.

He does realize there’s a thing known as Protestantism, right? That if this is the view he takes of the living magisterium, perhaps he’d be better off on the other side of the Tiber? Trust me, there are plenty of angry, low information bigots with whom he’d fit right in over in the Fundamentalist camp on that side. He could even help them pass out Chick Tracts, that sketch out more or less the same picture of the Pope as the one Skojec’s presented here.

Did Skojec issue one of these solemn Apoplectic Exhortations after the Istanbul explosions? Or does the thought of dead Muslims not tug at his heart strings in the same manner?

“It’s not the only photo I’ve seen. Others show bodies strewn in the streets, or the Eiffel Tower on fire. But the body of that little girl lying in the road has me at a breaking point.”

The fire at the Eiffel Tower wasn’t caused by a terrorist attack — but Skojec probably either doesn’t know that, knows it yet disregards it for rhetorical purposes, or he took ISIS at their word when they falsely claimed responsibility.

Since, however, Skojec seems to be so deeply affected by photographs and the like, perhaps someone should introduce him to the hours of footage (readily available online, and wholly uncensored) of Muslim girls, and boys, men and women, being brutalized and butchered by ISIS. Perhaps he should take a look at the tear stained faces of Muslims whose children have died at the hands of these extremists, and who know what their Faith teaches them, and how the ideology of ISIS is inimical to Islam.

“Political correctness has wrought this. Progressivism, liberalism, and the irresponsible leadership of the Western world.”

As I recall, it wasn’t the leadership of Liberals or Progressives that championed the Iraq War — which spawned, among other horrors, ISIS. 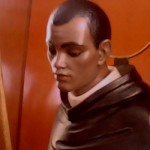 July 20, 2016 The Structural Sin of Racism Rends the Body of Christ
Recent Comments
0 | Leave a Comment
Browse Our Archives
Related posts from Cosmos The In Lost