Two more op-ed pieces by Christians who have seen Noah 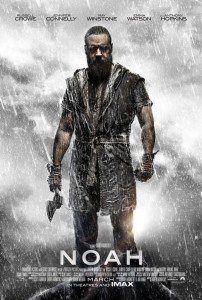 Three men who have actually seen Darren Aronofsky’s Noah took part in a panel discussion of the film at the National Religious Broadcasters convention nine days ago. And now all three men have basically issued ten-point statements responding to the film.

The first to do so was John Snowden, a biblical advisor to the film whose treatise ‘Why People of Faith Can Embrace Noah’ was actually distributed at the event itself before it was posted online a few days later.

And the third is Phil Cooke, whose article ‘Should Christians Support the Movie Noah?’ is now up at the Huffington Post. (The HuffPost version of the article is divided into nine points, but the version at Charisma News — which is where I first saw the article — is divided into ten, so it fits the basic pattern here.)

Intriguingly, in addition to saying that “Christians need to see the movie”, Cooke says the movie’s “unabashed look at sinful, grotesque humanity, and the extraordinary saving grace of God” reminded him of Catholic novelist Flannery O’Connor.

Back to Johnson and the five “negative” things he listed yesterday. While he explains each of these points in more detail at Christianity Today, the basic points are these:

A few quick points in response, if I may.

First, there’s no question that the character of Noah himself will be darker than many people expect; Russell Crowe himself has said as much. But it’s kind of hard to say that the film’s depiction of Noah deviates from the Bible’s description of him when the Bible actually doesn’t say all that much about his personality in the first place.

Johnson says, “It is hard to reconcile this character with the ‘righteous’ man described in Genesis 6 or the man of ‘faith’ described in Hebrews 11.” But what does “righteous” even mean? I addressed that question from one angle two weeks ago, and now Brian Godawa — one of the stronger critics of Darren Aronofsky’s film (or, rather, of an early draft of the film’s screenplay) — has addressed it from another:

One of the only things Genesis says about Noah’s actual character is that he was “a righteous man, blameless in his generation. Noah walked with God” (Gen. 6:9). The New Testament clarifies this meaning by noting Noah as an “heir” and “herald” of righteousness by faith (Heb. 11:7; 2Pet. 2:5). The popular interpretation of this notion of “righteousness” is to understand Noah as a virtually sinless man too holy for his time, and always communing with God in perfect obedience. But is this really Biblical? Would Noah have never sinned? Never had an argument with God? Never had to repent? As a matter of fact, the term “righteous” in the Old and New Testaments was not a mere description of a person who did good deeds and avoided bad deeds. Righteousness was a Hebrew legal concept that meant, “right standing before God” as in a court of law. It carried the picture of two positions in a lawsuit, one “not in the right,” and the other, “in the right” or “righteous” before God. It was primarily a relational term. Not only that, but in both Testaments, the righteous man is the man who is said to “live by faith,” not by perfect good deeds (Hab. 2:4; Rom. 1:17). So righteousness does not mean “moral perfection” but “being in the right with God because of faith.”

There’s more at Godawa’s post, and I recommend checking it out. The upshot of it all, though, is that there is plenty of room to believe that someone like Noah was “righteous” but had his dark side as well. And as for the movie’s Noah being a man of “faith”, well, he builds the Ark when God tells him to, doesn’t he?

Second, regarding the “environmental agenda”, opinions will vary as to whether there’s too much of it or not enough, so I won’t get into that here. (For what it’s worth, “Dr.” Ted Baehr, no liberal he, has also seen the film and stated that “all of the hyper-environmentalism that’s being reported” is “not in the final movie.”)

But I do want to respond to one of Johnson’s points here, where he states that killing animals is also condemned within the film “as a departure from the lifestyle in the Garden of Eden.”

It is true that the early chapters of Genesis record some killing of animals prior to the Flood; God himself gave Adam and Eve “garments of skin” when he banished them from Eden (and this skin, as far as I know, is traditionally assumed to have come from dead animals, and was not something God created out of thin air), and their son Abel kept flocks and offered an animal sacrifice that God found pleasing.

But the animals that are killed in this film are killed for food, and mankind is not given explicit permission to eat meat until after the Flood, when God makes his covenant with Noah (“Everything that lives and moves about will be food for you. Just as I gave you the green plants, I now give you everything”). And even then, God places restrictions on how the meat is to be eaten, restrictions that are binding on all of Noah’s descendants and were still enforced by the early church.

So as I understand it, it is not uncommon to say that humans were meant to be vegetarian during the period covered by the early chapters of Genesis. And if the film suggests that the killing and eating of animals before the Flood is something only the bad guys would do, then, well, there may be a traditional basis for that.

Third, regarding the film’s evolutionary creationism — I resist the term “theistic evolution” because, as Denis Lamoureux and others have pointed out, it lets the wrong noun “dominate the phrase” — not only is it a non-issue to me, it’s actually one of the sections in the script I read last year that got me truly excited to see this movie.

Finally, regarding the Nephilim… well, Johnson’s key objection involves a spoiler, so I won’t get into that for now, either. But suffice it to say that, yes, it appears that the film has revised some of the existing traditions about the Nephilim, but those traditions are themselves so strange that any filmed depiction of them would probably strike many people, Christian or otherwise, as really out-there.

To put this another way: Last week, Johnson said the fact that “Noah takes some textual elements literally” was one of five positive things about the film, and one of the ironies here is the fact that some viewers who insist on a literal interpretation of Genesis are actually objecting to the film’s quasi-literal take on some of the less familiar passages in Genesis (and the Jewish legends that build on those passages), from the vegetarianism before the Flood to Noah’s drunkenness afterwards.

March 3, 2014
Is seeing a Bible movie on opening weekend more important than going to church? Is it a way of "honouring God"?
Next Post

March 5, 2014 Ridley Scott on the "very modern" monotheism of Moses
Recent Comments
0 | Leave a Comment
Browse Our Archives
Follow Us!