The Bachelorette Won’t Cohabitate Before Marriage 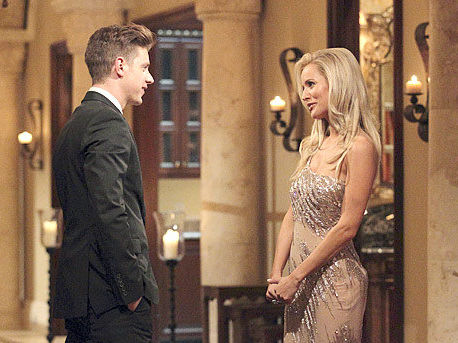 Well, The Bacheloretts is a long way from North Carolina.  This week, Emily and the remaining six guys were in Prague.

Good news for those on Team Jef: he and Emily finally had another one and one date.  Bad news: it involved creepy marionettes and role playing.  Awkward!  Somehow, the two of them managed to have a good time, and Jef even redeemed the otherwise strange date.  One of the marionettes was a princess who was supposed to represent Emily.  The other was a dark haired mustachioed puppet who was supposed to represent, um, the clean cut guy from Utah.  Whatever.  When they left the shop with the two puppets hanging from their threads, Jef made Emily wait in the street as he went back into the marionette’s shop.

What would make him go back into that shop of horrors?  He returned to get a smaller princess to represent Emily’s daughter Ricki.

Later, in the most beautiful library ever, they lay on the floor.  Why?  Because in the digital age, libraries can’t be just about books anymore.  Get with 2012.

Anyway, the most interesting exchange happened here, when Jef asked Emily if she wanted to move in with the person she will eventually choose as her fiancé.

As you know, the Bachelor contestants frequently choose to move in together after the proposal but before the wedding. This has caused some criticism and consternation amongst viewers and parents of contestants, as was most apparent in an exchange between Kacie Boguskie’s parents and the Bachelor Ben:

When Ben talked to Kacie’s mother, the conversation was even more direct.  She said she’s watched enough of the show to know the “winners” of the show end up living together prior to marriage.

“I have a serious problem with that,” she told him.

Upon hearing this, he looked absolutely flabbergasted.  He did manage to collect himself enough to mumble assurance that he shared their “traditional values.” Later in the episode, however, as he recounts the date to host Chris Harrison, he says he fully expects to co-habitate with his fiancé.  (He says this with the exasperation of a person having to explain why water is wet.)

Kacie’s parents refused to give their daughter their blessing to the relationship, and Kacie B had to take the limo ride of shame.

So…  back to this season.  What was Emily’s position on this issue? Would her opinions on the matter conflict with the is-he-or-isn’t-he-a-Mormon Jef?

When he asked her directly, she explained that believed that it’s a complicated question.  However, she’d ultimately rather get married instead of cohabitate.  She believes that marriage is more challenging, but more rewarding since you’ve made a commitment and must make it work.  Jef agreed, and said he wants his “forever person” to know when a relationship is supposed to be permanent.

Takeaways from this date?

1.     There is a Michael Jackson marionette in Prague.

2.     Jef found it easier to talk about his feelings using puppets, a la Richard Dreyfess in “What About Bob?”

3.     Jef might have given more clues that he’s actually a member of the Church of Jesus Christ of Latter Days Saints.  His parents are both in South Carolina for a few years.  His brother is in China.  Are they all on some sort of missions? He called his future wife his “forever person.”  Isn’t that how Mormons speak of their spouses and families?

So who do you hope wins Emily’s heart?  Are you warming to Jef? Will he overcome his lack of “f”s to win Emily’s hand in marriage?

One thing’s for sure.  Tonight’s episode indicated that Jef will be around for a long time.  (Which, in Bachelorette-speak, means at least another week and three other cities.)

Jef from The Bachelorette is “Not a Practicing Mormon”

June 25, 2012
Whole-Life is not Pro-Life, and (Sadly) Pro-Life Means Partisan
Next Post

June 26, 2012 Jef from The Bachelorette: I'm Not a Practicing Mormon
Recent Comments
0 | Leave a Comment
"and what makes this even better is that the two girls are sisters http://www.huffingtonpost.c..."
d Black activists cried "racism" over this ..."
"It's heart wrenching to hear about this. Our country is getting more vile and depraved ..."
BlackSun Syndicate Target proudly welcomes men to use ..."
"a wolf dressed as a sheep is still a wolf - if u have a ..."
Aussie In Austin Target proudly welcomes men to use ..."
"I am picturing a little turd in pajamas sipping coffee."
Cantbelieveyouthinkthis Los Angeles Craigslist ad somehow captures ..."
Browse Our Archives
get the latest from
Politics Red
Sign up for our newsletter
POPULAR AT PATHEOS Politics Red
1