How churches support domestic violence, and what you can do about it

How churches support domestic violence, and what you can do about it May 4, 2015 John Shore 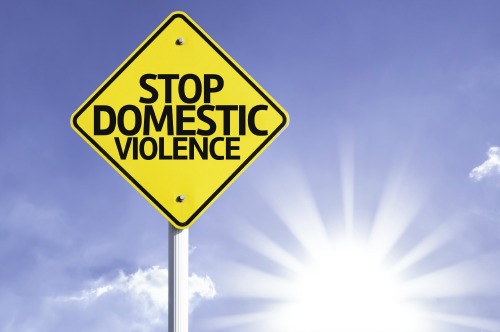 As I wrote about in my last post, “Bible-believing” Pastors and the Enabling of Domestic Violence (and have written about elsewhere*), the Christian church has a great deal to answer for when it comes to the perpetuation of domestic violence.

Why that’s true is no mystery. If you institutionalize the teaching that God has decreed that wives should submit to their husbands, then a lot of husbands are going to feel as if they have God’s authorization to beat their wives. And, believing it their duty to practice “sacrificial obedience” (not to mention because they don’t want to go to hell for being “rebellious” Christians), a lot of wives are going to silently suffer those beatings.

Complementarianism (the view that the “created order” of roles for men and women—men to be leaders, women to support them—complement each other, see) is a heinous notion. It’s an ornate sheath of a word hiding a sword made to cut women down; it’s brutish, ignorant, shamelessly sexist chauvinism disguised to look like reasonable Christian philosophy. A linchpin tenet of Catholicism** and many conservative Protestant Christian denominations (including, of course, the 46,000 church, 16 million-strong Southern Baptist Convention), complementarianism is a means for men to do what men have always done: use the Bible to get and keep all the power they can. (To learn more about the pernicious toxicity of complementarianism, see Rachel Held Evans’ exemplary work on this issue.)

(And, yes, as inevitably as a KKK leader will decry the idea that he’s a racist, defenders of complementarianism will protest that there’s nothing sexist or misogynistic about the idea that, as it’s put on the Basic Beliefs page of the Southern Baptist Convention’s website, “A wife is to submit herself graciously to the servant leadership of her husband.” Because who but a soft-headed, Bible-hating liberal would see that as a basis for the systematic oppression of women?)

To state the obvious: There is nothing whatsoever inherently wrong, misguided, or backwards with a husband working out of the house while his wife stays at home to raise their children. What is, however, terribly wrong is the idea that God has ordained that all husbands and wives should live that way. Choosing to be a housewife and mother is an honor. Having been inculcated to believe that you have no choice in the matter is a crime.

And yet the ruinous idea that God has predetermined for every female that she spend her life being an obedient wife and dutiful mother is one that millions of Christians are taught from the pulpit every Sunday. And if you don’t think that leads to churches coddling and protecting perpetrators of domestic violence while simultaneously heaping shame and scorn upon its victims, then you’re either excusably young or inexcusably thoughtless.

So what are we, Christians who outright reject the manifestly inane notion that women are inherently less qualified to lead home, church, and state, to do? How are we to address the appalling reality that in the name of our religion—our God, our Bible, our Jesus—young girls are daily and explicitly being taught that God wants them to be happy never aspiring to be anything different from “helpmeets” to their husbands—and that, if they ever fail to subserviently enough fulfill that role, they deserve to get beaten?

We must, after all, do something. Domestic violence is our problem. If someone who looks just like me is driving my car all around town and running people over with it, I personally (not to mention, of course, the people being run over) have a problem, whether I want it or not.

If you are a Christian, then you have a very clear moral obligation to make sure that your church is a place which, rather than ignore it, is helping to solve the problem of domestic violence.

And good news! There’s a way for you to do that!

Check out this treatment of scripture as it relates to the whole idea of complementarianism: 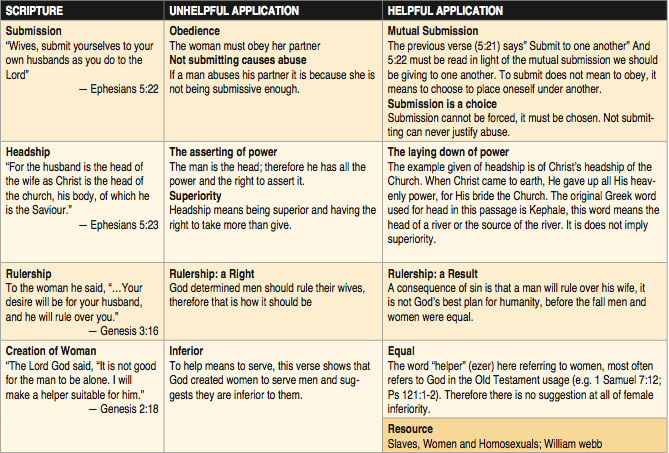 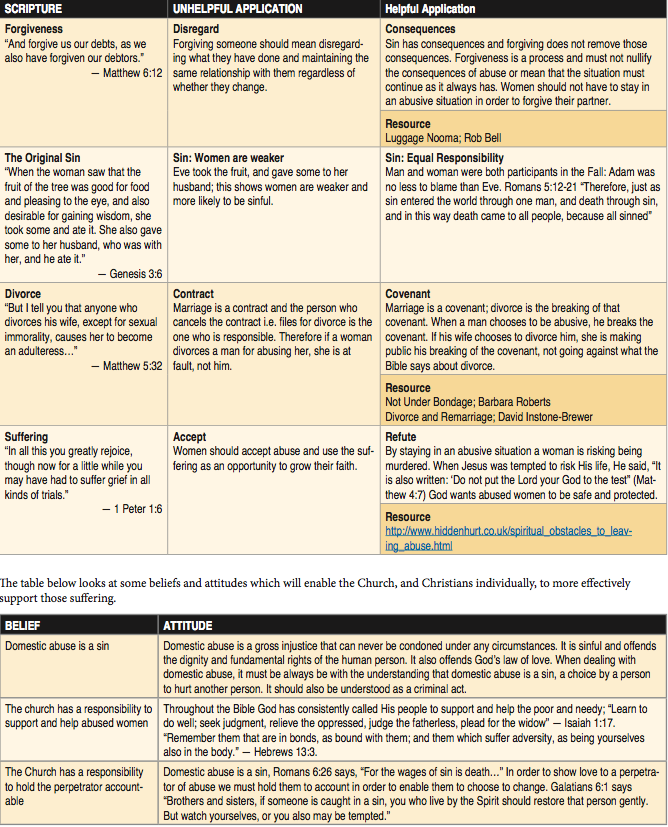 The above is from Restored, an international Christian alliance working to transform relationships and end violence against women. The organization puts out a splendid free publication called Ending Domestic Abuse: A Pack for Churches. You can download it here.

The pack includes this Charter for Churches, which, by displaying, “the local church will be making a public statement about its condemnation of domestic violence and its availability to offer information, care and support to those who are victims.” 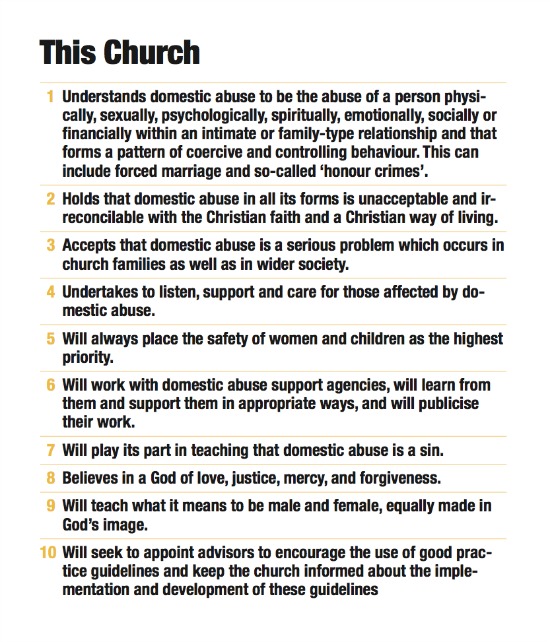 A few stats that should motivate anyone to help end domestic violence:

Download Ending Domestic Abuse: A Pack for Churches. (And show Restored some love: their FB page is here; they Tweet at @Rest0red.) Make it, and the information it contains, an ongoing part of the life of your church. Share it with your pastor and your church’s small groups. Arrange for your church to hold classes or symposiums on the problem of domestic violence. Invite someone knowledgable on the matter to speak at your church. As a church, reach out to a local organization that aids victims of domestic violence; help your church to become part of their mission.

Do all of these things—and do them with double energy if you’re a man. We need men to speak up on this issue; we need men to come together and forthrightly insist that (as we have it in the fifth tenet of the What We Believe statement of Unfundamentalist Christians) God does not want any woman automatically “submitting” to her husband or to anyone else.

By empowering your church to become active in the fight to eradicate domestic violence, you may never know whom exactly among your congregants you’re helping or even saving. But you can bet your Bible it’s someone, and that it’s probably more than one person. At the very least you can be positive that you are greatly pleasing God by helping to undo the damage done to women in God’s name, by making sure that every person is safe, valued equally, and receiving the love and respect that is God’s true desire for each and every one of us.

* Christian Leaders: For God’s Sake, Stop Empowering Wife Abusers;  An Abused Wife Twice Betrayed: Once by Her Husband and Again by Her Pastor;  Pastor: “He should have killed you. At least you’d have died a virgin.”; Why Pastors Struggle With Confronting Domestic Violence; and 6 truths about “forgiving” sexual abuse and forgiveness.

** In “Complementarity of Man and Women,” his opening address to the November 2014 Humanum Conference, Pope Francis strongly reaffirmed the tenet of complementarianism, calling it “the root of marriage and family,” and “not just a good thing, but also beautiful.” Read the full text of his speech.

I’m the author of 7 Reasons Women Stay in Abusive Relationships, and How to Defeat Each One of Them. 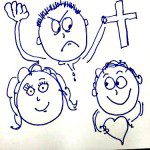 April 28, 2015
When Bad Christians Happen to Christians in Love with Non-Christians
Next Post 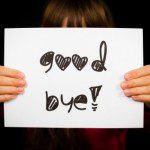 May 7, 2015 When your parents love who they want you to be more than who you really are
Recent Comments
36 Comments | Leave a Comment
"FOR THE READER'S BENEFIT & EDIFICATION:To see https://www.monergism.com/topics/hell The Biblical information therein refutes the cultists ..."
Thomas Dickensheets Proof that believing in hell is ..."
"you quote from an apocryphal story which is not part of God's Word inserted into ..."
Gum Boocho Waiting for Bob Jones’s huge gay ..."
"The story you refer to, at the start of John 8, is not a part ..."
Gum Boocho Waiting for Bob Jones’s huge gay ..."
"There is a huge point to the prodigal son story that Jesus told that is ..."
Jesse Baker Dude: Being a Christian doesn’t mean ..."
Browse Our Archives
get the latest updates from
John Shore
and the Patheos
Progressive Christian
Channel
POPULAR AT PATHEOS Progressive Christian
1

Jan. 17 Flashback: The Boy Who...
slacktivist
Books by This Author Books by John Shore