I’m sure lots of you have noticed the recent facebook profile picture trend in favor of marriage equality, especially the use of the now ubiquitous red square with a pink equal sign. You may also have noticed conservatives changing their profile pictures in opposition. I want to take a moment to look at a few of those.

The first category were profile pictures that sought to respond directly to the equality message—sometimes really directly. 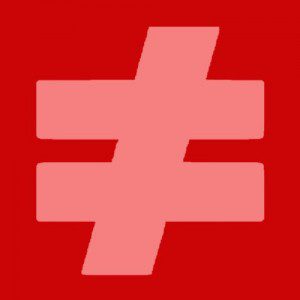 This seems . . . I don’t know, really blunt to me. It’s like giving marriage equality advocates the middle finger. Seriously, who responds to a campaign for equality by saying “sorry, not equal”—except without the “sorry”? It seems to me that most people are more, I don’t know, tactful about it. But then, maybe seeing them being direct is a good thing. The mask comes off. 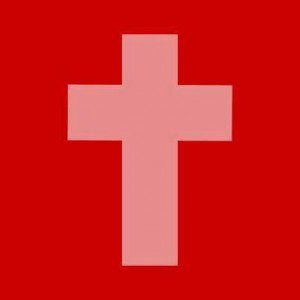 The point is . . . ? I mean, I get the idea. Clever, right? Just take the pink equal sign lines and cross them! A cross! Given that those who support marriage equality—Christian or not—were using pink equal signs and not using the cross, I’m going to assume that the statement was meant to be something along the lines of “I’m Christian, so nope, sorry, I’m against marriage equality, obviously.” The trouble here, of course, is the assumption that Christian = against marriage equality. It doesn’t. You can be Christian and support marriage equality. In fact, I personally know quite a number of Christians who do just that. And besides, responding to a message in favor of equality with a religious symbol is a bit . . . odd. Like, “I know you want equal rights and all, but sorry, my religion says NO.” How . . . loving?

Next come several images that weren’t generally used as profile pictures but have nevertheless been shared widely over the past several days. 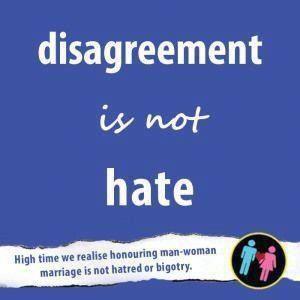 Honestly, this image just made me sigh. Look, I have a “man-woman marriage,” and I think it’s great! Guess what? No one is talking about banning or disallowing or dishonoring marriages between men and women. No really. No one. That’s not what this discussion is about. This discussion is about equal rights, and I’m sorry, but even if your desire to deny someone else equal rights—the same rights you already have—isn’t rooted in hate, it’s still damaging. It still causes others real harm and affects real life. Disagreement may not be hate, no, but withholding rights from someone is harmful. And that, quite simply, is what we’re talking about. 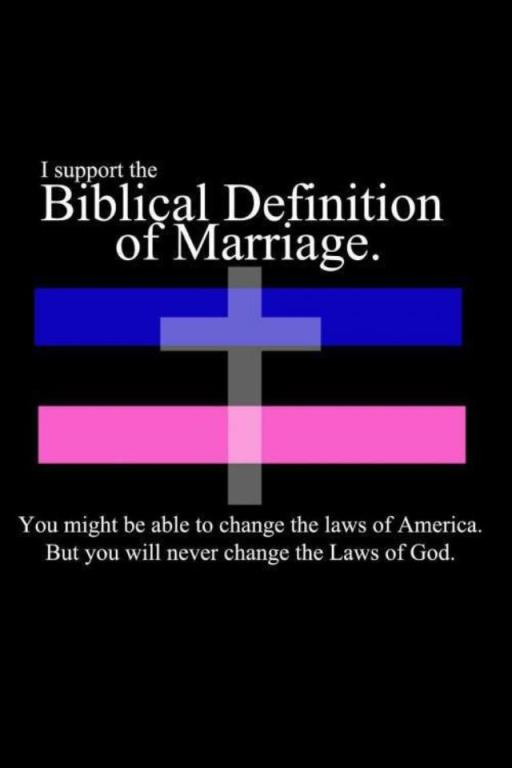 Two things of note: First, it cracks me up when people speak of supporting “the Biblical definition” of marriage. I mean, really? How’s that polygamy working out for you? Second, this image seems to admit that supporters of “traditional marriage” (another term that makes me laugh) are on the losing side here. But really? I’m pretty sure that the push for marriage equality is indeed an attempt to change “the laws of America” and not an attempt to change “the laws of God.” (But also, it’s worth noting that there is disagreement among Christians over “the laws of God.”)

But as you may have noticed, the most popular response was to turn to the issue to abortion. I think that conservatives are fully aware that they’re losing on the marriage equality issue but winning on the abortion issue, and that they want to capitalize on that both by trying to turn people’s attention from the one to the other and also by trying to draw connections between the two.

First the images, and then discussion: 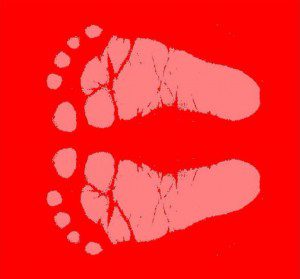 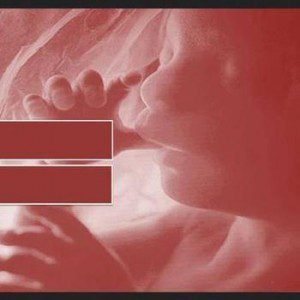 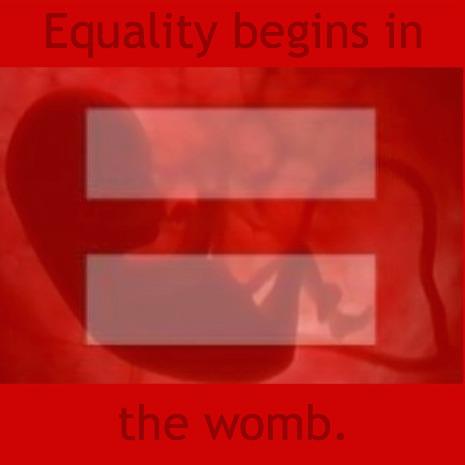 After pointing out that “saying life begins in the womb is not an argument against gay marriage,” blogger Lana of Wide Open Ground had this to say of these images:

Two ways I can see of reading it. 1) gay rights begins in the womb, or 2) a fetes has the same rights as a human, but gays do not have a right to marry who they want. Somehow I think people mean the latter.

As Lana points out, the obvious interpretation is that we need to remember that gay fetuses should also have the right to marriage equality—except that not only am I pretty much 100% sure that that’s not what they’re saying, primarily because the people posting this image are those who oppose marriage equality but also because we don’t let children, babies, or fetuses get married. Lana’s second interpretation, that fetuses should have equal rights but gay people shouldn’t, is probably closer to the actual intent, but it really doesn’t make sense either, both because that’s not what the image actually says and because there’s nothing in that argument to get us from premise to conclusion. Responding to one group’s claim to equal rights by pointing to another group and saying that they need rights too is not actually an argument against the first group’s claim.

I think I understand what’s actually going on here, though. It’s actually an argument that happens all the time. It’s goes like this: “How can you advocate for people’s right to XYZ (or support XYZ program to help people) when you don’t care about the thousands of babies being murdered every day?” It’s the argument that any compassionate program of rights or social justice we argue for cannot be valid, because we aren’t doing anything about the abortion “holocaust” (also called the abortion “genocide”). In other words, it’s an attempt to invalidate our claim that we believe in equality and justice. But what this argument turns into in practice is an attempt to hold other rights and programs hostage—to say that until fetuses have rights, we can’t have nice things.

How about you? What images did you see on facebook over the past couple of days that you found interesting—or enraging?