A Call for Action: Ratify the UN CRPD!

In two recent posts, guest contributor Rachel Lazerus has examined Michael Farris’ recent testimony before the Senate Foreign Relations Committee. In that testimony, and elsewhere across the web, Farris has argued against the U.S. ratifying the UN Convention on the Rights of Persons with Disabilities (CRPD). In a sort of mission drift, Farris has been using his position as arguably the most prominent homeschool activist—he founded the powerful Home School Legal Defense Association—to expand into a range of issues beyond just homeschooling. This is but one example.

In her first post, Rachel Lazerus examined the faulty way that Farris has portrayed what happened during his testimony to his followers. Farris has twisted the facts to such an extent that he is essentially lying, and has done so in such a way as to both create fear among his followers and raise money for his organizations. In her analysis, Rachel Lazerus walked us through what actually took place during Farris’s testimony, supplying but quoted transcripts and links to videos of his testimony.

In her second post, Rachel Lazerus looked at the citations Farris used during the testimony to buttress his opinions and found that he was taking these citations out of context and twisting their meanings. This is important because it speaks to something beyond just his testimony—these same citations are frequently used on Farris’s various websites and by his various organizations. Whether it’s through incompetence or malicious intent, Farris is misleading his followers—and the public.

While Rachel’s two pieces are long, they are worth a read. I’ve summarized them here for those who do not have the time or interest in reading them in their entirety. I’ve also created this summary because I want to echo Rachel’s call to action. Farris has overextended himself, reaching far beyond homeschooling and attempting to shape policy in areas that affect populations far outside of his usual following. It’s time we pushed back and told him no. And so I finish with Rachel’s call to action.

If you live in one of these states, please call your senator and ask them to ratify the Convention on the Rights of Persons with Disabilities (CRPD). As long as the US refuses to ratify the CRPD, we look silly and backward and provide other nations with an excuse for refusing to sign the treaty or refusing to implement it. We need to lead by example, and ratifying the UN Convention on the Rights of Persons with Disabilities is part of setting that example.

HSLDA has helpfully provided an app on their website which will provide you with contact information for each of your representatives in Congress. I use it here as a wonderful information source, and I express my sincerest thanks to the good folks at HSLDA who make participatory democracy possible.

And if you appreciate the effort Senators Boxer, Durbin, and Menendez put into dismantling the arguments of Farris, call them and tell them so.

Let’s get involved and get this treaty ratified.

November 12, 2013
Michael Farris’s Lies, Damned Lies, and Bad Sources: Testimony before the Senate on the UN Convention on the Rights of Persons with Disabilities, Part 2
Next Post 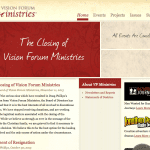