Christian Terrorist Robert Dear and the Army of God

In the wake of last week’s Planned Parenthood shooting, conservatives claimed that the shootings were unrelated to either abortion or that organization. Some claimed that it was actually a robbery, and that the shooting had started at a nearby bank and the shooter had merely fled to Planned Parenthood. This turned out to be false, and as more information has come out about Dear it has become increasingly clear that this was indeed an act of anti-abortion violence—a form of Christian terrorism.

Indeed, Dear has committed past acts of vandalism against Planned Parenthood:

Dear appears to have been opposed to the reproductive health agency [Planned Parenthood] for decades. Barbara Mescher Michaux, who was married to Dear from 1985 to 1993, said Tuesday that Dear once put glue in the locks of a Planned Parenthood clinic near where they were living at the time — and “that was over 20 years ago when he did that,” she said.

Ms. Micheau, 60, said in a brief interview Tuesday that late in her marriage to Mr. Dear, he told her that he had put glue in the locks of a Planned Parenthood location in Charleston.

“He was very proud of himself that he’d gone over and jammed up their locks with glue so that they couldn’t get in,” she said.

While this act occurred over twenty years ago, Dear’s opposition to abortion and praise for anti-abortion terrorism never truly ended. While his third wife, to whom he was married in the late 1990s, stated that Dear did not “obsess” over abortion, his more recent comments suggest that if his concern over abortion waned at one point, it certainly picked up again in the last decade or so.

One person who spoke with him extensively about his religious views said Mr. Dear, who is 57, had praised people who attacked abortion providers, saying they were doing “God’s work.” In 2009, said the person, who spoke on the condition of anonymity out of concerns for the privacy of the family, Mr. Dear described as “heroes” members of the Army of God, a loosely organized group of anti-abortion extremists that has claimed responsibility for a number of killings and bombings.

As you may remember, 2009 is the year abortion doctor George Tiller was shot while attending church. It was likely in that context that Dear praised members of the Army of God as “heroes.” But that raises a question—what is the Army of God?

From the University of Maryland’s terorist organization profile for the Army of God:

The Army of God is an underground network of terrorists who believe that the use of violence is an appropriate tool for fighting against abortion. An excerpt from the Army of God Manual says that the Army of God “is a real Army, and God is the General and Commander-in-Chief. The soldiers, however, do not usually communicate with one another. Very few have ever met each other. And when they do, each is usually unaware of the other’s soldier status. That is why the Feds will never stop this Army. Never. And we have not yet even begun to fight.” Pastor Michael Bray is the Chaplain of the Army of God. He hosts the annual “White Rose Banquet” honoring those imprisoned for anti-abortion violence. He also wrote the book “A Time to Kill,” which provides a biblical justification for the use of violence against abortion providers. Bray has served time in jail for bombing abortion clinics. Bray’s daughter is named after a murderer of an abortion doctor.

I’ve seen many people claim that Dear was a “loner” and that anti-abortion violence is different from other forms of terrorism because it is not “organized.” This isn’t quite true. While Dear himself may have acted alone (we’ll learn more about this in the weeks and months to come, I’m sure), there are organizations that exist to promote anti-abortion violence among their members—including the Army of God.

Not only is the Army of God is not only a terrorist organization, they actually have a manual explaining exactly how to wreak havoc on abortion clinics through threats, vandalism, arson, bombings, and much, much more. The manual (which you can download here) even endorses suicide bombings. Here is a sample:

[T]he reason that things like bombs and arson techniques are relegated to the Appendix of this manual (for “Eyes Only”) is not because they are wrong of ineffective.  On the contrary those methods are powerful, appropriate and discriminate. The difficult is cost i.e. charges, jail time, etc. Some tactics cost about half a lifetime in prison.  Also, some ring in federal investigation crews and they have almost unlimited money and manpower.  So…other tactics can be very effective when used over and over, and carry minimal risk. If some soul can’t rest until a hundred abortuaries go up in smoke, fine.  But at least they should use time delays and take them out all at once.  Then lay very low for a very long time.  Love is patient.  Never ever give in to the temptation to go back to see the results, or share the secret with anyone.  Unless there’s a statute of limitations, the time is up, and no other activities are ever undertaken.

Here is another sample:

There is a compound which mixes like a resin and remains as a putty for 15 minutes or so.  But after that time, it begins expanding to 8 times its original volume, with strength enough to crack foundations, steel beams, etc.  Imagine what might happen were you to bore-drill a foundation and insert Expansive Material. Many variations are possible.  For example, cardboard tube style (Sonotube) former pilasters which raise buildings off the ground often have cavities ready made in them for electrical outlets.  You can also introduce EM into roof plumbing vents. (See Tree houses)

The earliest documented incidence of the Army of God being involved with anti-abortion activity occurred in 1982. Three men associated with the organization kidnapped Hector Zevallos, a doctor who performed abortions, and his wife, Rosalee Jean, and held them hostage. The hostages were later released unharmed.[2]

The “East Coast division” of the AOG claimed responsibility when three men, including Michael Bray, planted bombs at seven abortion clinics in Maryland, Virginia, and Washington D.C. in 1985.[3]

The AOG claimed responsibility for Eric Robert Rudolph‘s 1997 nail bombing of abortion clinics in Atlanta and Birmingham as well as an Atlanta lesbian bar.[4]

Clayton Waagner, claiming to act on the part of the “Virginia Dare Chapter” of the AOG, mailed over 500 letters containing white powder to 280 abortion providers in 2001. The letters claimed that the powder was anthrax; though it was not identified as such, the tactic took advantage of the public’s fear of biological warfare after the recent real anthrax attacks.[5][6]

The group is also associated with a number of abortion clinic bombings, arsons and murders of abortion providers. Some of these murderers claimed association with the AOG; in other cases, while the killers expressed no affiliation with the group, the AOG has lionized their acts and taken up their cause.

The Army of God website as an entire section praising the man who killed George Tiller, including a form for individuals to write a letter of support which will be sent to him in prison. The website features other individuals who have murdered abortion doctors and others, describing them as “heroes.” In fact, the Army of God uses the words “terrorism” and “Christian terrorist” as positive things. Not surprisingly, they have already begun their praise for Dear.

This statement appears at the top of their website:

Anyone who supports abortion has the blood of babies on their hands.

I have seen people claim that Robert Dear was not a Christian because his beliefs were not in line with Christ’s teachings. It is a simple matter of fact that there are entire organizations and networks of people who think his actions were in line with Christ’s teachings. They argue that Christ taught his followers to stand up against evil, and to defend the innocent, and they believe abortion is an evil blight upon this nation and that thousands of babies are being brutally murdered each day. In their view, defending the innocent is the most Christ-like thing a person can do.

Teenage anti-abortion activist turned critical blogger Kathryn Elizabeth has started a blog series on the Army of God. This is important reading, because at this point America is far too unaware of the depth and history of anti-abortion violence in this country. It is this ignorance that led so many to argue that Dear’s shooting must have nothing to do with abortion or Planned Parenthood. Dear is no mere loner. Dear fits within a wider—and violent and dangerous—context.

And if you don’t like that, start condemning the violence. 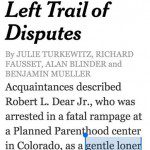 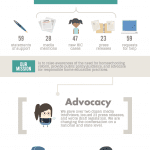