Have a look at how the New York Times described Robert Dear, the Planned Parenthood shooter, in an article published over the weekend: 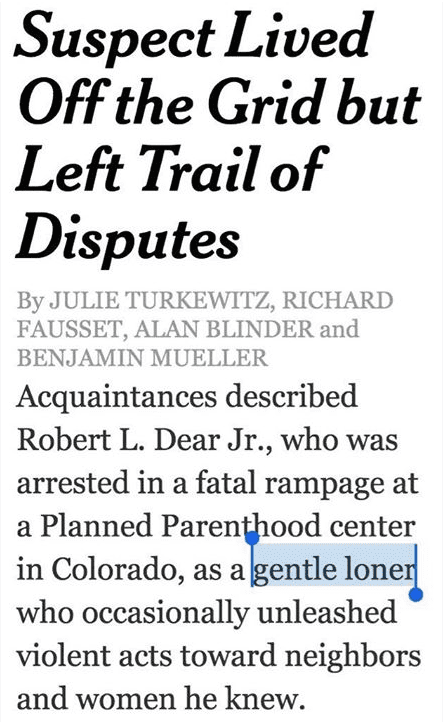 For contrast, have a look at the way CNN introduced Freddie Grey, a young black man who died in police custody earlier this year, in an article yesterday: 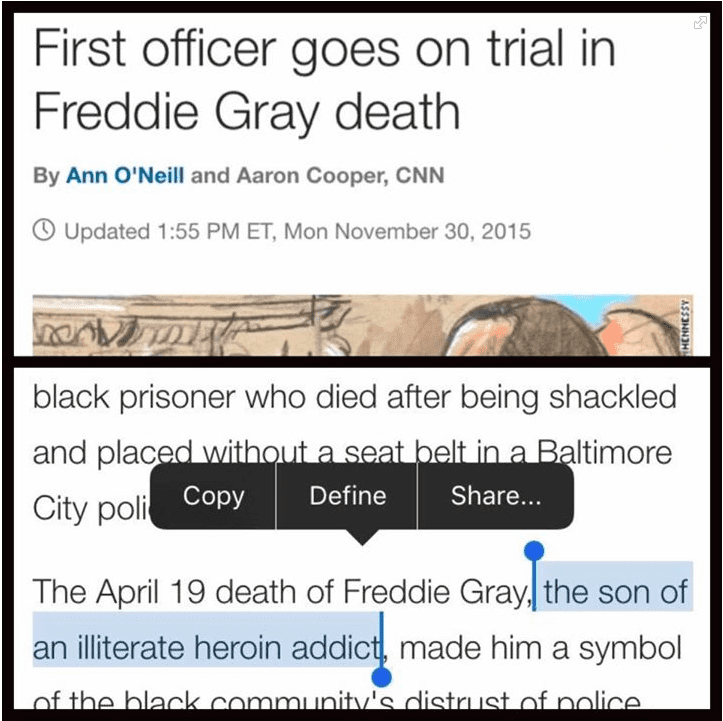 Robert Dear is a “gentle loner” while Freddie Grey is “the son of an illiterate heroin addict.”

I have neighbors who are recent transplants from India. In speaking with them several weeks ago I learned that they believed that black people in the U.S. are predisposed to violence, and are more criminal and dangerous than other groups. When I asked how they had come to believe this, they told me they had come to this conclusion through the news media. In other words, news organizations like the New York Times or CNN, among others, actively make people racist.

When we talk about words, and about how people are described, and about how articles are framed, it’s not ephemeral. It’s central. Our perceptions are shaped by words, and descriptions, and framing. Remember last year when the New York Times wrote that Michael Brown “was no angel”? In the wake of that description, Vox collected comparisons between the New York Times’ description of Brown and its description of various white serial killers, via Sean McElwee, and the results were stark. The contrast in description between Robert Dear and Freddie Grey is no one-off case.

How about this one, after Katrina: Something is very, very badly broken here, and with tragic consequences. To add another example, both white people and black people riot, but the media covers the two completely differently. I’m already beginning to worry about the ways the media may shape my young children’s perception of race as they grow. I am hopeful that having black friends at school will help offset racist media portrayals, but that means ensuring that they stay in integrated school districts, not always an easy task in an era when school segregation is making a comeback, and even progressive parents are contributing.

December 2, 2015 Christian Terrorist Robert Dear and the Army of God
Recent Comments
0 | Leave a Comment
Browse Our Archives
get the latest from
Nonreligious
Sign up for our newsletter
POPULAR AT PATHEOS Nonreligious
1