The Lie Behind the Transgender Bathroom Predator Myth

Last month, after the North Carolina rushed a bill barring trans people from using the bathroom of the gender they identify as, a transgender man posted this tweet: 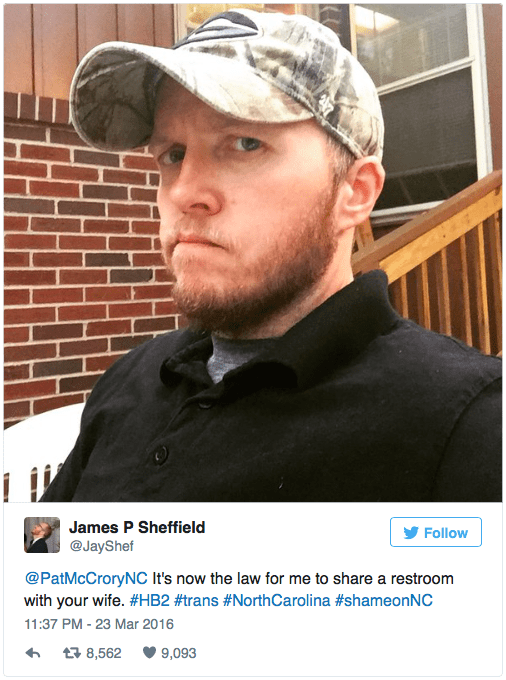 It’s important to note that not every trans man passes as unambiguously as Sheffield, and that there is discussion within the transgender community about the privilege of passing—not every trans person can do it, and some choose not to. Additionally, a growing number of individuals identify as nonbinary, and these individuals are often also considered trans. Still, it occurs to me that with this tweet Sheffield singlehandedly dismantles the argument that allowing transgender bathroom usage would let non-transgender men enter women’s bathrooms to harass women.

Let me back up for a moment. Many conservatives oppose transgender bathroom access because they believe people should always be identified as the gender they were designated as at birth. They do not believe a trans man is a man, or that a trans woman is a woman. This ignores the fact that some people are born with ambiguous genitalia (meaning that the binary isn’t quite so binaristic as they think), and the fact that many societies have for millennia had a “third sex” option, but there it is.

Others, perhaps trying to be seen as more compassionate, skip that argument and argue instead that transgender bathroom access would allow non-transgender male “peeping toms” to take advantage of the law and enter women’s restrooms to harass women, arguing that the law (somehow?) gives them the right to be there.

Let me be clear: I am not saying that transgender people are predators. Not by a long shot. What I amsaying is that there are countless deviant men in this world who will pretend to be transgender as a means of gaining access to the people they want to exploit, namely women and children.

There are also organizations that make both arguments, contending both that trans women are actually men (and vis versa) and that male sexual predators will take advantage of the law by entering women’s restrooms dressed as women and claiming a right to be there.

Of course, the sticking point is the being creepy part—bathrooms are for doing your business and getting out, and anyone who appears to be videotaping or spying on people in stalls should be reported regardless of their gender or appearance. This entire discussion should offer us a moment to pause and discuss bathroom safety, how to identify creepy or threatening behavior, how to report it and who to, and so on and so forth.

But let me move on before I get off track.

Here are some more photos of trans men:

These men and other trans men like them (as well as those who don’t “pass” as well by traditional standards) are now required by law to use women’s public restrooms in North Carolina. Lawmakers should remember that barring trans bathroom access does not merely keep trans women out of women’s bathrooms, it also keeps trans men in them. If we were using conservatives’ own rhetoric and logic, we would be asking how long it will be before “peeping toms” realize they don’t have to put on any pretense at all to enter women’s restrooms, beyond claiming to be trans men.

I would be asking that, but looking at these pictures, I can only come up with different questions. What happens to trans men in North Carolina? The men in the pictures above are faced with an impossible choice—either use the women’s restroom as required by law and very likely be questioned by police, or break the law and use the men’s restroom and hope no one who knows they’re transgender sees them—and that none of the men in the restroom are able to identify them as “actually” women. Trans women face a similar choice—use the women’s restroom and hope they’re not caught, or use the men’s restroom (as required by law) and risk being beat up or harassed or outed to their friends or worse. All of this is only harder for those who can’t (or choose not to) “pass” as unambiguously.

Those who focus on predators taking advantage of trans bathroom access laws are forgetting why these laws have been proposed in the first place. Trans people need these laws. We can talk all we like about the hypotheticals of sexual predators using these laws as a cover (all evidence to the contrary), but any such conversation ignores the fact that trans people who need bathroom access are very much not hypotheticals. They’re standing right there, and you may not even realize it. It’s not like they wear signs. We have got to find a way to stop conservatives from derailing conversations about very and present real problems with hypotheticals and what ifs.

That this issue has blown up in the way that it has is really weighing on me. I had thought we were behind this, but apparently we are not. I found out recently that my own daughter is sometimes questioned by other students in the bathrooms at school because she doesn’t look or dress femininely enough, and she’s not even trans. Have we really come to a place where policing other’s genders and gender expressions is that important? I am genuinely worried for my trans friends. I’ve watched laws like these affect their decisions about where to live, where to go, where they feel safe. And at the moment, we seem to be going backwards. 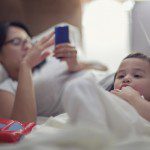 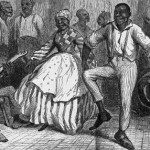