I’ll be honest—I sometimes think Donald Trump tweets ridiculous things to distract us from all of the horrible things he’s doing. Keeping us jumping from random thing to random thing keeps us from focusing too deeply on, oh, his efforts to increase the amount of time immigrant families can be interned, or his newly enforced rule depriving Planned Parenthood of Title X funds. Having said that, what the actual hell is going on?

I’m honestly not too terribly bothered by the whole Greenland thing. We elected a narcissistic real estate mogul to the presidency. I mean really, what did we expect? It’s the whole Donald Trump basically declaring himself the King of Israel thing that’s really taking me aback. I don’t know, maybe it’s because I grew up evangelical. Where I come from, they called that kind of thing blasphemy. Or at least, they used to. 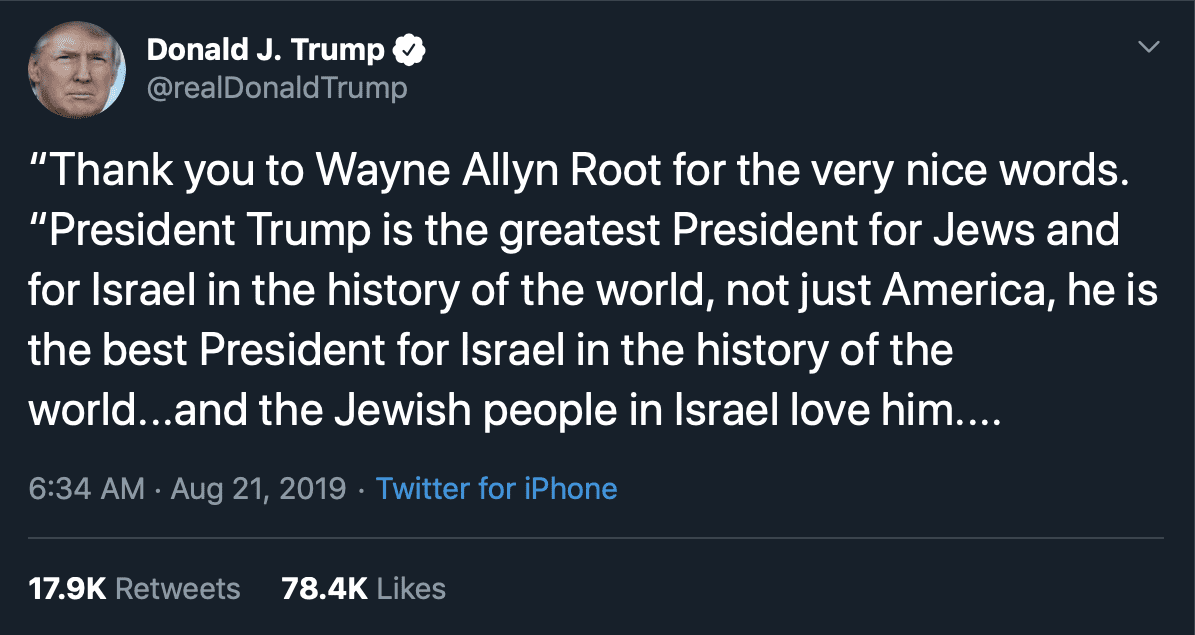 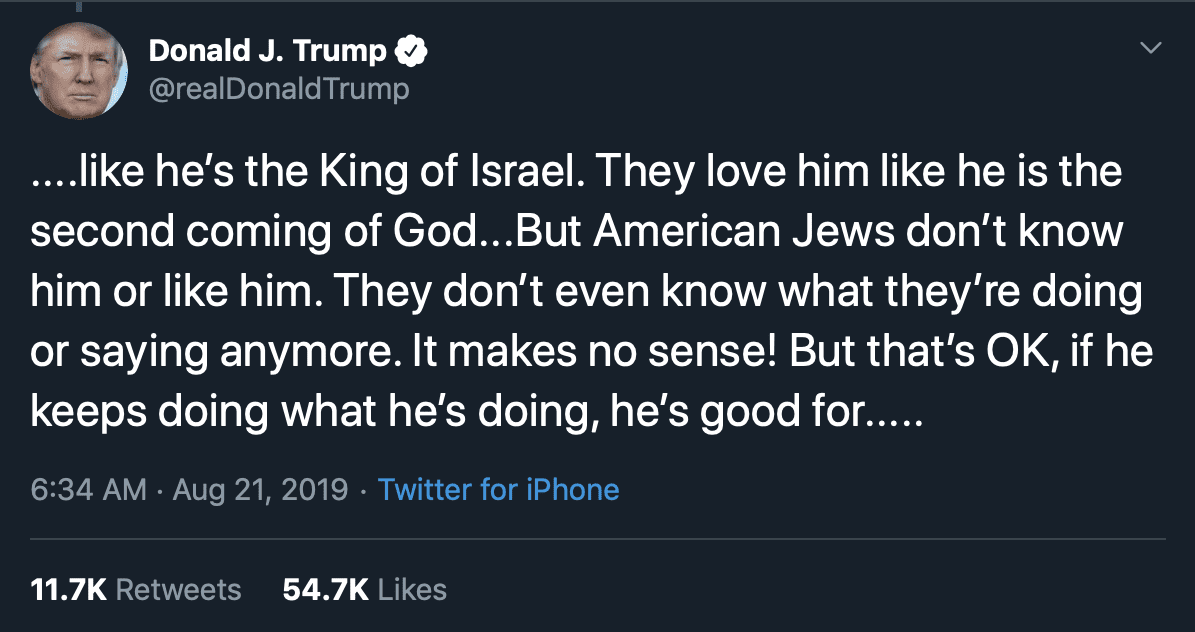 Here are the tweets in text form:

….like he’s the King of Israel. They love him like he is the second coming of God…But American Jews don’t know him or like him. They don’t even know what they’re doing or saying anymore. It makes no sense! But that’s OK, if he keeps doing what he’s doing, he’s good for…..

…..all Jews, Blacks, Gays, everyone. And importantly, he’s good for everyone in America who wants a job.” Wow!

Trump boasts. He boasts a lot. He does it almost unceasingly. He has the BEST rallies, the BEST crowd attendance, he has the BEST economy, and he is the BEST president, ever. Here, though, you would think he’s finally gone too far. At least, you would think so if evangelicals hadn’t already proven themselves more than willing to support Trump as he did three million other things they absolutely should have objected to.

It’s funny. I didn’t realize how much faith I somehow still had in evangelicals, despite leaving evangelicalism over a decade ago, until Donald Trump was elected. My friends say I have some Hufflepuff in me, and maybe I do. I want to think the best of people. That’d be easier to do if people would stop proving me wrong.

With that out of the way, let’s go over Root’s central statements line by line. Remember, Trump quoted Root’s words and thanked him for his praise, effectively affirming Root’s statements.

It’s certainly true that Trump thinks Netanyahu is the best thing since sliced bread. What’s less clear is whether Trump’s playing the sycophant to Netanyahu is actually the best thing for Israel. I don’t know all that much about Israeli electoral politics, but I do know that Netanyahu is not without strong domestic political opposition.

…and the Jewish people in Israel love him….like he’s the King of Israel. They love him like he is the second coming of God…

Look, random radio hosts can say whatever nonsense they want. The problem here is with Trump is gleefully quoting Root’s words. The Jewish people love Trump like he is the “King of Israel”? Really? Even if most Israeli Jews support Trump—and my googling suggests this may be the case (although —this is a bit much. And unless I’m very much mistaken, Jews don’t believe there will be a “second coming of God.”

Here’s the problem, for evangelicals: Trump just gloated and crowed over about a claim that millions of people love him like he’s the second coming of God. Maybe this isn’t blasphemy, strictly speaking—Trump didn’t say he is the second coming of God—but it’s something just as insidious. Trump didn’t even balk at the idea of people showing him a level of love that ought to be (in the evangelical understanding) reserved for God alone.

Growing up, I heard a lot about the importance of not having idols. We were taught to examine ourselves to ensure that we didn’t love anything in our lives—our spouse, our musical ability, our home or physical possessions—more than we loved God. A mere suggestion that our love for something other than God might be approaching our love for God was a huge red warning sign. We must never set an idol before God, we were taught. Trump, in direct contrast to everything I was taught was right, is glorying in being an idol.

I mean, good god, we grew up reading about girls who had to dump their boyfriends because they realized their boyfriends were putting them before God. And here Trump is, glorying in the idea that someone might put their love for him on the same level with God. From an evangelical perspective, this should be utterly horrifying.

But let’s return to Root’s words for a moment, because his last comments—about American Jews—bring up another thing we need to discuss:

But American Jews don’t know him or like him. They don’t even know what they’re doing or saying anymore. It makes no sense!

We have to go back slightly to get the full context here. A few weeks ago, Donald Trump publicly urged Israel to bar Rep. Rashida Tlaib of Michigan and Rep. Ilhan Omar of Minnesota from entering its borders. Think about it. An American president urged another country to deny American elected officials entrance. I realize that the technical definition of treason is pretty narrow, but this is definitely undermining America interests abroad.

Trump did this because he disagrees with Tlaib and Omar’s position vis a vis Israel, because it does not align with his own position. Never mind that both Tlaib and Omar were lawfully elected, and as such represent the will of the people of their districts.

Things sort of snowballed from here. First, many American Jews expressed outrage over Trump’s actions, and argued that Tlaib and Omar should not have been banned from entering Israel. This made Trump angry. In response, Trump made this comment: “I think any Jewish people that vote for a Democrat—it shows either a total lack of knowledge or great disloyalty.” This touched off another firestorm, as commentators pointed out that Trump was repeating the anti-semitic trope that Jews living outside of Israel will always have a divided loyalty.

American Jews overwhelmingly vote Democrat. Trump clearly knows this, as it is the root of his frustration—he can’t understand why they would vote Democrat when he’s clearly so good for Israel. And so I’m wondering—couldn’t he just ask?  If he doesn’t understand why most American Jews vote for Democrats, it sounds like he has some asking and listening to do. But no! He would rather declare them ignorant or disloyal. Game over!

It was in the context of to this story that Root, the conservative commenter and consummate conspiracy theorist, said what he did on his radio show, declaring Trump the best president ever for Israel and the second coming of God in the eyes of the Israelis, words Trump gloatingly quoted on twitter. Oh, and you know what else? During a news conference, Trump turned to reporters, gestured to the sky, and said “I am the Chosen One.”

But you just watch. It won’t matter. Evangelicals will go right on supporting Trump, blasphemy or no blasphemy, and utter glee over taking the place of God in people’s hearts notwithstanding. These things ought to matter, but they won’t. We passed that point long ago. Perhaps that last little bit of Hufflepuff in me is finally dying.*

* I wouldn’t count on it. My inner Hufflepuff can be weirdly hearty. 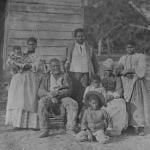 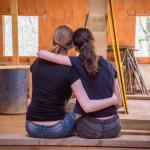