What. What just happened. 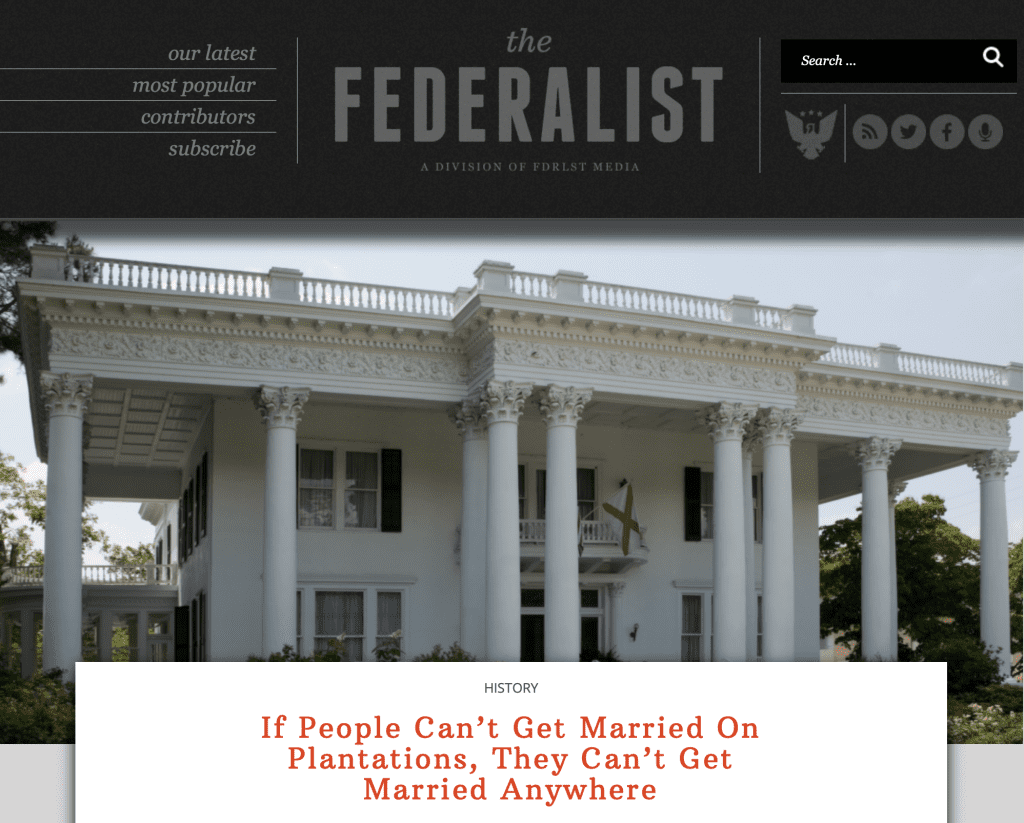 When I first saw this shared on twitter, I genuinely thought it must be photoshopped. But no, it is not. There is an actual article in the Federalist, in the year of our lord 2020, titled “If People Can’t Get Married On Plantations, They Can’t Get Married Anywhere.” It was published yesterday, and is written by Casey Chalk of the American Conservative.

Chalk offers this explanation in his byline:

It is absolutely true that horrible things have happened across the entire United States. As further explanation, Chalk notes that “the entire country was once the land of American Indians, and a good deal of it deceptively or violently taken from them.” (This is an interesting admission coming from the Federalist, which tends to dismiss people who talk about stolen land as lefties.) And you know what? I genuinely do not recommend having a wedding at the Little Bighorn Battlefield National Monument or at the Wounded Knee Massacre Memorial. Just, don’t do that.

Chalk’s argument would be akin to saying that if you can’t get married at Auschwitz, you can’t get married anywhere in Germany, because horrible things happened across the entire nation under the Nazi regime. It should not be difficult to see that there is a very big difference between getting married at a place built to function as a locus of imprisonment and genocide, and getting married at a church that probably once flew a Nazi flag, by virtue of being located in Germany.

Chalk says that plantations are beautiful. “Is it not appropriate to celebrate momentous occasions in beautiful places?” He then adds this:

If such locales have tragic histories, this is all the more reason to reimagine them in ways that both recognize and overcome that past. An example of this occurred in December, when a number of black medical students posed for a photo at a former slave plantation, a site some of them called “holy.” Heck, why not celebrate their graduation there? Now, that’s poetic justice.

I actually hadn’t seen the photo he references. 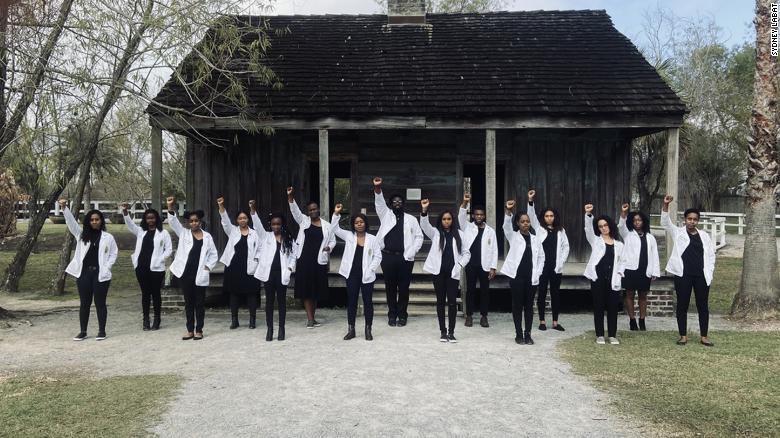 Now that is badass.

I have to imagine, though, that Chalk can do logic well enough to see the difference between a white couple getting married at a plantation, and black medical students posing for a photo in a plantation’s former slave quarters. The entire reason this photo exists is that these places still hold potent meaning for those whose ancestors were enslaved.

The very fact that black medical students would find having their photos taken in the slave quarters of a plantation empowering undermines Chalk’s argument. These locations are not value neutral today. Chalk says it is useful to “reimagine [plantations] in ways that both recognize and overcome that past.” Turning plantations into wedding venues (that almost by definition will cater primarily to white couples) does nothing to recognize or overcome their past.

If an interracial couple wanted to get married at a planation, that would offer a way to recognize and give the finger to the location’s past. That could be a form of poetic justice not unlike the photo of the Tulane medical students. If someone wanted to purchase a plantation house and open it exclusively to events and ceremonies with a racial justice aspect—acts of “poetic justice”—that could actually be really interesting. But that’s not what people are upset about.

Chalk adds this, further demonstrating his inability to understand why people are actually upset:

We might also remember that many of the most celebrated and visited historical sites in our country are Southern manors built and worked by slaves: Mount Vernon (itself a wedding venue), Monticello (another wedding venue), and Montpelier (also a wedding venue) among them.

The fact that Mount Vernon, Monticello, and Montpelier are all wedding venues isn’t a justification of using lesser known plantations as wedding venues, as Chalk seems to think it is. No one who criticizes plantation weddings thinks any of those locations—all of which served as sites for the exploitation of enslaved peoples—are some sort of gold standards.

Will we need Google to warn us that searching for such places — or even worse, planning a vacation to visit them — are microaggressive acts, as if we are unable to contemplate both the good and bad of such places?

This is some serious bad faith argumentation.

Chalk may not realize it, but by evoking Mount Vernon, Monticello, and Montpelier in his defense of using plantations as wedding venues, he has also brought the plantations as wedding venues discussion more firmly into a broader and longer discussion of the whitewashing of historical locations and the erasure of the chattel enslavement that undergirded them. There was a time when each of these three locations were interpreted in a way that erased or mishandled the presence of enslaved peoples. In each case, there has been pressure from historians and others, and, gradually, change.

Even today, none of these locations handle enslavement perfectly, and all are still under pressure to improve. There is a difference between historical tourism and whitewashed celebration of the past. Activists and historians have spent decades pushing Mount Vernon, Monticello, and Montpelier toward doing actual history, and not just celebration of an imagined past. But the plantations as wedding venues that Chalk is defending? These locations don’t even pretend to be solid historical tourism. They are fully in the whitewashed celebrations of the past camp. So Chalk can come right down off his “can anyone ever visit any historical site ever if people can’t get married at random plantations” high horse.

I’m also genuinely curious what Chalk would say was the “good” of such places. Presumably he is referring to the fact that some of our earliest presidents lived at them, including individuals who were the architects of the rights we hold today. Chalk should remember that, at the time, these rights did not apply to everyone. These men may have stumbled upon a formula that, once applied to more peoples through rights movements bought of blood, sweat, and tears, did some genuine good. But at the time when they created these structures, they were motivated by their own self interest.

Regardless, Chalk goes on:

Moreover, blacks, both free and slave, provided the bulk of labor that built the White House, the U.S. Capitol, and other early government buildings. All of these places, despite their histories, are objectively beautiful. Because of the tragedies that transpired therin, they powerfully communicate how far America has come.

I only quote this bit to contrast it with what he says later: he has a whole section titled “This Generation Isn’t Morally Superior to Others.” Oh really? Whatever happened to powerfully communicating “how far America has come”?

I’ll give one one paragraph as a sample:

Nor do the sins of our forefathers nullify their many acts of virtue or the great political and cultural gifts they bestowed upon future generations. Indeed, it is the Christian character of America that has allowed us to recognize and seek to rectify our past errors. How many of the great nations of human history have so actively beat their breasts over their sins, both against their own citizens and the peoples of the world? Only a country with a conscience — in our case informed by the Christian beliefs of our ancestors — would bother to engage in the kinds of self-criticism and atonement visible in American society.

And with that last paragraph I quoted above, made up of complete tripe, I am so done. Does Chalk not even realize that he’s here refusing to engage in the very self-criticism he’s claiming Christians have led the country in doing? That he’s claiming that Christians like him enabled our nation to get rid of slavery and Jim Crow, while simultaneously arguing that a movement against plantation weddings being led by people of color is misguided and wrong?

There is no atonement in plantation weddings. 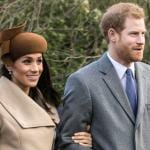 January 13, 2020
Harry, Meghan, and the Decision to Leave
Next Post 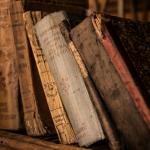