The Les Misérables Movie: Background on the Bishop

The Bishop of Digne from Les Misérables is one of my favorite characters in all of literature. In this post, I’ll explain why.

Recently, I’ve been blogging on the movie version of Les Misérables (1. Fact Check, 2. Script Changes, 3. Suddenly, 4. Surprises at the End). Today, I want to step back and give a little background from Victor Hugo’s amazing novel. I will how well the musical script (both for stage and film) accurately portrays this character. But I will also fill out the picture a bit. Perhaps you will be drawn to read Les Misérables for yourself.

If you picked up Les Misérables without knowing anything about the book and began reading, you’d think the main character of the narrative was someone named Charles-Francois-Bienvenu Myriel. In fact, depend on how quickly you read, you’d spend the first couple of hours of Les Misérables learning about the Bishop and his exemplary life.

Born into a privileged position in French society, Myriel married and moved to Italy. But his wife died and, for reasons not explained, Myriel became a priest. Not long afterward, he was promoted to the position of Bishop of Digne. Though his family had lost its fortune in the political upheavals of France, the Bishop received a considerable sum to support his life as clerical royalty. Moreover, he was expected to live in the large, luxurious episcopal palace in Digne.

Yet, the Bishop used almost all of his personal income in order to care for the poor of his bishopric. Moreover, he chose not to live in the palace, but rather to dwell in the humble building next to the palace, which had been used has a hospital. The hospital moved into the spacious quarters next-door.

The Bishop was a truly, deeply Christian man. In one passage, Hugo describes him in this way:

He was indulgent towards women and poor people, on whom the burden of human society rest. He said, “The faults of women, of children, of the feeble, the indigent, and the ignorant, are the fault of the husbands, the fathers, the masters, the strong, the rich, and the wise.”

He said, moreover, “Teach those who are ignorant as many things as possible; society is culpable, in that it does not afford instruction gratis; it is responsible for the night which it produces. This soul is full of shadow; sin is therein committed. The guilty one is not the person who has committed the sin, but the who has created the shadow.”

It will be perceived that he had a peculiar manner of his own of judging things: I suspect that he obtained it from the Gospel.

Would it be that all of us judged things in a peculiar manner, shaped by the Gospel!

The Bishop gave away almost all of his possessions, retaining only a few valued treasures from his past:

Altogether, [the Bishop’s dwelling, humbly furnished], which was attended to by the two women, was exquisitely clean from top to bottom. This was the sole luxury which the Bishop permitted. He said, “That takes nothing from the poor.”

It must be confessed, however, that he still retained from his former possessions six silver knives and forks and a soup-ladle, which Madame Magloire contemplated every day with delight, as they glistened splendidly upon the coarse linen cloth. And since we are now painting the Bishop of Digne as he was in reality, we must add that he had said more than once, “I find it difficult to renounce eating from silver dishes.”

To this silverware must be added two large candlesticks of massive silver, which he had inherited from a great-aunt. These candlesticks held two wax candles, and usually figured on the Bishop’s chimney-piece. When he had any one to dinner, Madame Magloire lighted the two candles and set the candlesticks on the table.

The Bishop’s affection for eating from his inherited silver dishes underscores the power of his sacrifice that comes a bit later.

He did not consider the place in which he lived to be his own. Note how he talks about his dwelling to Jean Valjean:

This is not my house; it is the house of Jesus Christ. This door does not demand of him who enters whether he has a name, but whether he has a grief. You suffer, you are hungry and thirsty; you are welcome. And do not thank me; do not say that I receive you in my house. No one is at home here, except the man who needs a refuge. I say to you, who are passing by, that you are much more at home here than I am myself. Everything here is yours.

Yet, the Bishop would object to what I just wrote. He would say that, even though he had inherited this silver from his family, it was not his. After Valjean stole the silver, but before he was brought back to the Bishop, the housekeeper lamented, “He has stolen our silver.” Hugo continues the story:

The Bishop remained silent for a moment; then he raised his grave eyes, and said gently to Madame Magloire:— “And, in the first place, was that silver ours?” Madame Magloire was speechless. Another silence ensued; then the Bishop went on:— “Madame Magloire, I have for a long time detained that silver wrongfully. It belonged to the poor. Who was that man? A poor man, evidently.”

At this point, the story is a familiar one, portrayed similarly in the novel, stage musical, and film. The gendarmes bring Valjean to the Bishop, accusing him of robbery. The Bishop shocks everyone, Valjean most of all, by talking as if he had given the silver to Valjean, including the Bishop’s beloved candlesticks. After dismissing the gendarmes, the last we see of the Bishop, other than a cameo appearance at Valjean’s death, is when he draws Valjean near to him and says in a low voice:

“Do not forget, never forget, that you have promised to use this money in becoming an honest man.” Jean Valjean, who had no recollection of ever having promised anything, remained speechless. The Bishop had emphasized the words when he uttered them. He resumed with solemnity:— “Jean Valjean, my brother, you no longer belong to evil, but to good. It is your soul that I buy from you; I withdraw it from black thoughts and the spirit of perdition, and I give it to God.” 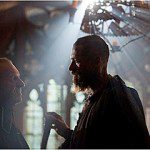 January 12, 2013 The Lord Is My Shepherd - Inspiration from the High Calling
Recent Comments
7 Comments | Leave a Comment
"Great prayer."
John Donaldson A Prayer for Memorial Day
"Yep, it works. Was looking around to see if anyone knows WHY."
Rick Chance A Miraculous Cure for Bug Bite ..."
"Hi Pastor,I am hoping you will continue your discussion on how God guides us. Can ..."
BB How Does God Guide Us?
"Happy birthday USA you are 243 years old today. Like in a marriage, a lot ..."
Tom Krayg Astounding Freedom: A Reflection for Independence ..."
Browse Our Archives
get the latest from
Evangelical
Sign up for our newsletter
POPULAR AT PATHEOS Evangelical
1