Warning: If you have not seen the film version of Les Misérables and you intend to see it sometime in your life, I would encourage you to stop reading now. Instead of finishing this piece, read instead the excellent post on Les Mis by Tim Dalrymple.

For me, the biggest surprise of the movie version of Les Misérables came right at the end. I suppose I would have been more surprised by the addition of the song “Suddenly,” but I knew before I saw the film that it had been added. Yet, I was not expecting a couple of innovations that appeared in the closing minutes of the movie. I want to comment on these today.

Once again, I’ll follow the pattern of my last three blog posts of the Les Misérables movie (1. Fact Check, 2. Script Changes, 3. Suddenly). I have been evaluating differences between the stage and film versions of the musical Les Misérables, comparing these to Victor Hugo’s novel. As I do, I’m asking: Do the changes in the script makes sense in the story? Are they faithful to the novel?

In the closing scene of the movie, as Jean Valjean is dying, he writes a letter to Cosette, singing:

On this page
I write my last confession.
Read it well
When I at last am sleeping.
It’s the story
Of one who turned from hating
A man who only learned to love
When you were in his keeping.

This differs somewhat from the stage version of Les Mis:

On this page
I write my last confession
Read it well
When I at last am sleeping.
It’s a story
Of those who always loved you
Your mother gave her life for you
Then gave you to my keeping.

Both of these version emphasize key elements of the Les Mis story. The movie version focuses on the transformation of Jean Valjean, which is fully in keeping with Hugo’s story (see yesterday’s post). But, in the novel, Jean Valjean’s last statement does indeed focus on Cosette’s early life and on her mother. In fact, in Valjean’s last statement, he finally reveals to Cosette the name of her mother, Fantine, adding: “Remember that name—Fantine. Kneel whenever thou utterest it. She suffered much. She loved thee dearly. She had as much unhappiness as thou hast had happiness.” So, in this case, I’d give the nod of accuracy to the stage production, though allowing that the movie is faithful to the novel in a different way. The movie does give appropriate honor to Fantine, however, when she appears as a ghost to welcome Jean Valjean to glory.

But then comes a much bigger surprise. As Jean Valjean’s spirit gets up and begins to walk toward heaven, he is welcomed by none other than the Bishop, the one whose mercy turned Valjean’s life around. The presence of the Bishop completes the circle, as he once again blesses Jean Valjean with grace.

This creative innovation, not found in the stage production, moved me. It also made me curious. Does the Bishop show up in the final scene of Hugo’s novel?

In a sense, the Bishop is always present with Jean Valjean through the symbolism of the candlesticks, which the Bishop once gave to Valjean and which he has treasured his entire life. So, you don’t need a human figure of the Bishop to remember his transforming influence on Jean Valjean. The candlesticks figure prominently in the final scene of the story in all three media: novel, stage, and film.

But does the Bishop show up in the novel, or is this innovation in the movie only? To answer this question, I had to go back and do some homework, re-reading the final chapter of the novel. What I found fascinated me. Yes, indeed, the Bishop is present in Jean Valjean’s last moments. In his final speech, for example, he says to Marius and Cosette:

I bequeath to her the two candlesticks which stand on the chimney-piece. They are of silver, but to me they are gold, they are diamonds; they change candles which are placed in them into wax-tapers. I do not know whether the person who gave them to me is pleased with me yonder on high. I have done what I could.

Yet, this is not the only place Hugo mentions the Bishop in Jean Valjean’s last minutes of life. A bit earlier, the woman overseeing his dwelling asks Valjean, “Would you like a priest?” Notice how Hugo portrays Valjean’s response:

“I have had one,” replied Jean Valjean. And with his finger he seemed to indicate a point above his head where one would have said that he saw some one. It is probable, in fact, that the Bishop was present at this death agony.

Though I’ve read Les Misérables two times, and I’ve read the final scene probably a dozen more, I had never before paid attention to this piece of the story. The Bishop was with Valjean in his death. Surely, by implication, he was also there to welcome him to heaven. Once more, I credit the film with making changes that both strengthen the story and are faithful to Victor Hugo’s novel.

In case you’re interested, here’s how  Hugo narrates the death of Jean Valjean:

He had fallen backwards, the light of the candles illuminated him.

His white face looked up to heaven, he allowed Cosette and Marius to cover his hands with kisses.

The night was starless and extremely dark. No doubt, in the gloom, some immense angel stood erect with wings outspread, awaiting that soul.

The Bishop is not mentioned, though his presence is conveyed through the candlelight that illuminates Valjean’s face.

In the stage and film versions of Les Mis, the Bishop plays a small but crucial role. We feel as if we know the Bishop, though he is barely introduced to us. In the book, however, we get to know the Bishop much better. In fact, the first 70 pages or so, that’s about 7% of the novel, are devoted to introducing the Bishop. I’ll say more about this in my next post on Les Misérables. 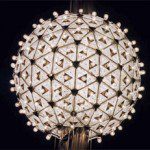 December 30, 2012
A Psalm for the End of the Year - Inspiration from the High Calling
Next Post 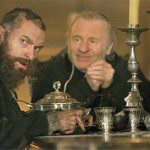 January 2, 2013 The Les Misérables Movie: Background on the Bishop
Recent Comments
16 Comments | Leave a Comment
Browse Our Archives
get the latest from
Evangelical
Sign up for our newsletter
POPULAR AT PATHEOS Evangelical
1