Embracing Christian Spirits As A Witch

While working with my ancestors, Saint Cyprian kept showing up. This was during my reluctancy to work with any sort of saint or Christian spirits within my craft. He kept showing up relentlessly. Eventually I decided to look him up. For those who are completely clueless about who Saint Cyprian is, in a nutshell the story is that he was a Pagan Sorcerer from Antioch who mastered the occult secret of the lands around him such as Egypt, Chaldea, and Greece. Due to his failed attempts to cast a love spell on a Christian woman named Justina (either on his or a client’s behalf depending on the story), he converted to Christianity where he rose to the bishophood.

Docteur Caeli D’Anto retells the most popular version of his story, which is worth checking out if you’re interested. The legend goes that after his death he regretted destroying his library and appeared to different monks and sorcerers as a spirit and dictated his magickal grimoires to them. In fact, the term “Book of Cyprian” was a common name for any grimoire for a period of time in history, just as there was a period of time where many grimoires were attributed to Solomon. He was said to have mastered Solomonic magick in his legend as well, before his conversion.

In most versions of his myth, Cyprian was a servant of the Devil before his conversion, being the Faustian prototype. Discussing his “bishophric twin of Exu Meia Noite” in Kimbanda, Nicholaj de Mattos Frisvold describes him “with a foot in Hell and the other in Heaven. It is a beautiful imagery for Saint Cyprian, the bishop of letters with one cloven foot…” in his preface to The Book of Saint Cyprian by Humberto Maggi entitled, “Saint Cyprian, The Devil’s Scribe.”

The liminal nature of Saint Cyprian interested me enough to petition him, being a master of and involved in every form of magick I can think of – including being embraced in various diasporic religions and folk magick practices. So I informally petitioned him, knowing that he unlike other folk saints such as Santa Muerte who will work with anyone who approaches her, will not work with everyone. I directed my attention in my mind’s eye to his image and shot a prayer to him.

I told him that if he was willing to work with me to show me what he was possible of and to open a major door for me and make it evident that he had done so. In return I would begin formally working with him if this was fulfilled. The next day in less than 12 hours, I was approached with a major unexpected offer – a door of opportunity that I thought was still far off. Something that was so miraculous to me that I knew this was a clear sign of his work. True to my word, I ordered a statue of him from Amazon and a bunch of supplies from the Vodou Store to set up an altar to him that very day.

Now, I’m not saying anything with absolute certainty on how to work with Cyprian, or other saints, or deities. Many traditions are very adamant of how you can and can’t work with him as well as who and who cannot work with him. The following is all my own personal gnosis and thoughts on the subject. This is not to override how other traditions work with him, but merely to share my own ruminations, experiences, and conclusions with working with him. I am not suggesting that you believe these things or embrace them in your practice. You are sovereign in what you embrace or reject as part of your Craft.

After performing my prayers and devotional work to Cyprian I sat in meditation with him, waiting to see if he had anything to say. What he said to me changed how I view Christian Spirits. Within meditation a calm and firm voice arose asking me two rhetorical questions, “How can you be fully engaged in your magick, if your ancestors whom you are a part of are not part of your magick? How can your ancestors be fully engaged with you when you deny the God and spirits they worked with?”

I have performed the ritual of “warlocking” in the past to unshackle the chains of indoctrination and remove any previous contracts with Christianity that I had made. However, I still struggled with Christian elements in my own magick and spirituality. However, my adamant rejection of anything remotely Christian showed that there was still work to do.

Cyprian’s questions brought more of my own for reflection. Why would I embrace deities and spirits foreign to me and reject those that my own ancestors worked with or worshipped? Why must I view things from the point of view of Christianity where it’s an either/or situation? Had I not been paying attention to all those books on Traditional Witchcraft with its heavy Christian elements? Had I totally missed the realization that the Cunning Folk traditions which a lot of modern Craft is based upon was a purely Christian practice in its application?

The idea of being dual-faith has a long history in Paganism and Witchcraft, standing in the liminal between different world-views and practices on one’s own terms. Had I totally missed the synchronism of Christianity and Pagan Magick and working with the Folk Saints in most of Folk Catholicism as opposed to Vatican Catholicism? Had I missed Stregheria’s embrace of Christian elements and spirits? Why would I assume that I could fully effect a culture that embraces Christianity, without tapping into that current of power myself?

“I would like to emphasize that not all saints are Christian. The concept of saints predates Christianity but has since been hijacked by the Vatican. Although not all spiritual traditions and religions have saints, most do. I could discuss this for hours (and sometimes do; it’s one of my favorite classes to teach) but if people are interested, this is described in detail in the book.

Saints are the powerful, benevolent, and generous dead who linger to help the living. There is a long history of saints from one religion being venerated by devotees of other religions who claim to receive results. For example, Christians and Muslims venerate some of the same saints in Egypt, while Muslims and Jews often venerate the same saints in North Africa. And there are folk saints who are not attached to any religion, but who provide miracles nonetheless.

The reason people like working with saints is that it is direct one-to-one interaction with the sacred and because saints were once human, they tend to be sympathetic to human needs in ways that other sacred beings who lack human incarnations may not be. I would advocate that no one work with any spiritual entity of any kind that they are not comfortable with, but saints are incredibly responsive.”

What I can say, is that working with these spirits on my own terms, as a witch, has been very powerful. I often try to distinguish myself and my practices as Witchcraft as opposed to Paganism – not because I think there’s anything bad about being a Pagan, but because it doesn’t reflect my practices quite succinctly. I have not traded in one master for many. If there’s one thing that I truly worship, it’s the Star Goddess, which is a part of every spirit and every person – Christian spirits included. The way that I work with the gods and spirits is that of mentors and alliances. I can honor, respect, and even praise gods and spirits without bending my knee in submission. I don’t need saviors nor masters, but I’m willing to befriend them and see what they have to say and who they are from themselves. I rather learn about them from themselves first. I rather drink water straight from the well itself.

Since I’ve began building a personal connections with saints and spirits from Christianity, instead of blindly believing what has been passed down – I have found that a key element to my magick that was missing is suddenly there. My folk magick and conjurations are suddenly much stronger. My ancestors are closer and are more readily willing to work with me. While I still keep these workings separate from my pagan flavored witchcraft, I feel stronger as a witch and my ability to work with both angels and demons has strengthened as a result. 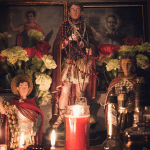 March 6, 2018
Judika Illes on Folklore, Witches, and Saints
Next Post 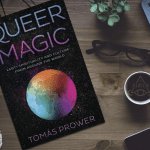 March 22, 2018 Review: Queer Magic
Recent Comments
0 | Leave a Comment
"This makes me love jack-o-lanterns even more."
Anonymous Jack-O’-Lanterns and the Devil
Browse Our Archives
Related posts from For Puck's Sake