Exploring Your Shadow With The Tarot

This post is inspired by Paige at The Fat Feminist Witch. Her podcast has quickly become one of my favorites. I was listening to her episode entitled “Emotional Witchcraft” where she talks about emotional self-care and the Shadow and discusses the book Light Magic for Dark Times: More than 100 Spells, Rituals, and Practices for Coping in a Crisis by Lisa Marie Basile and Joanna DeVoe’s Shadow Work Course. What really struck me about this episode is when Paige starts discussing the Tarot drawing parallels with exploring her own aspects of her shadow self with the Queen of Swords archetype.

I can’t believe I had never thought about that before! As I have discussed on this blog before, the shadow self, contrary to most people’s understanding of it, is not necessarily completely negative aspects of ourselves. It can include empowering parts of ourselves that we’re rejecting and suppressing out of either shame or fear. One of the main components of performing shadow work is not to just acknowledge and then try to fight or conquer the shadow, but rather to repurpose it as something that assists you so that you’re no longer rejecting an aspect of yourself but rather giving it a healthier role within your psyche and life. This is a task that people really struggle with. Many people get to the point of identifying aspects of their shadows but are unsure about what to do next or how they can give it a different role.

“The elements that we feel shame around or suppress are often elements of primordial human consciousness that serve certain purposes. Seductiveness, manipulation, obsession with power, vanity, the impulse for domination, envy, etc. — these aspects may seem repugnant to us and we may wish to push them away from ourselves. But they have developed as means of getting our needs met. We can learn from them by releasing shame around them, seeking the core lesson within them, accepting them, and figuring out how to manifest them in ways that are actually helpful to ourselves and others. So, for example, let’s say someone has a shadow obsession with vanity. They may overly fixate on their physical form or criticize others unconsciously. But, if they could learn to see the core of that shadow element — that there is beauty within us waiting to be unlocked and expressed — then they could see that their fear is actually wrapped around something quite exquisite. And then, perhaps, they could use the gift of that lesson not to neurotically exert control over their own physical form or police others, but to beautify themselves and the world with love.”
– Sarah Lynne Bowman, Ph. D.
Integrating The Shadow Self (For Puck’s Sake Interview)

This is why the tarot is absolutely brilliant as a start. The tarot contains sixteen archetypes ready to be explored – the court cards. Each court card embodies both positive and negative traits of the same archetypal character — or rather healthy and unhealthy expressions of that core energy. By exploring the tarot court cards in this manner you can kill two birds with one stone. You gain a deeper understanding and connection with the court cards (which are usually a tarot reader’s biggest struggle) as well as help heal and reintegrate your shadow in a healthy manner.

Take out the six court cards and set them aside and shuffle them. I suggest drawing one card a month, since shadow work is something that should be explored slowly and in-depth. Spend that month exploring the card. Research the positive and negative meanings of that court card archetype. Even if you’re a tarot master, sometimes someone else will frame a meaning of a card that will switch on the epiphany lightbulb over your head. Think about the unhealthy or unbalanced aspects of that card. Think about who you know that embodies that energy, both within your life and fictional characters. Think about how you embody those negative traits.

Also think about the positive aspects of that card’s traits when they’re being used in a healthy manner. Repeat the same process of thinking about others that embody this as well as ways that you embody this. Meditate on how you can reframe and repurpose those aspects of this archetypal energy within your own life so that it’s serving a healthy and balanced expression. Spend time dialoguing with this part of your shadow to create allies out of the aspects of yourself you’ve marginalized to the shadows of your consciousness. Keep a record of your thoughts and exploration in a journal and see how much you can uncover about yourself. 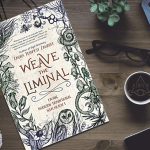 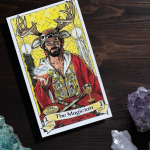 January 15, 2019 Review: The Robin Wood Tarot
Recent Comments
0 | Leave a Comment
"This makes me love jack-o-lanterns even more."
Anonymous Jack-O’-Lanterns and the Devil
Browse Our Archives
Related posts from For Puck's Sake